Don’t Throw the Past Away

The study of business history in North American business schools has been on the wane for some time now, crowded out by “more practical”, “hard” topics. History is seen as nice, rather than necessary. But if contexts matter in management, then history matters. In The New Ecology of Leadership I have a chapter on the topic and give three reasons why the study of history is essential for managers:

I found an excellent illustration of these benefits when I reviewed recently Andreas Kluth’s fine book, Hannibal and Me: What History’s Greatest Military Strategist Can Teach Us about Success and Failure. When I first wrote this review for Strategy+Business Mr. Kluth was US West Coast correspondent for The Economist; he is now their Berlin Bureau Chief and German Correspondent.

Book Review: Hannibal and Me: What History’s Greatest Military Strategist Can Teach Us about Success and Failure 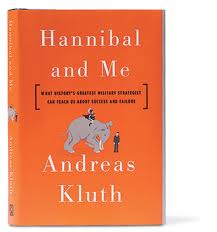 One of the most effective ways of educating professional soldiers is the staff ride, which combines a rigorous course of historical preparation with an on-site examination of the terrain over which a battle was fought. The resulting appreciation of the effect of space and time on the outcome of a battle and on a soldier’s ability to both issue and obey orders is a powerful leadership development tool. Indeed, since its invention by the German General Staff during the 19th century, the staff ride has become standard practice in many armed forces.

In Hannibal and Me: What History’s Greatest Military Strategist Can Teach Us about Success and Failure, Andreas Kluth, the U.S. West Coast correspondent for the Economist, takes readers on a staff ride of his own — not just with Hannibal (247–183 B.C.), the military genius whose vastly outnumbered forces inflicted defeat after defeat on the powerful and rising Roman Empire, but also into their own minds.

Far superior to the typical biography-cum-leadership-book, Hannibal and Me uses the Carthaginian commander’s story as only one strong thread, sometimes warp and sometimes woof, in a tapestry that is skillfully woven in space. For example, Kluth gives the reader a palpable sense of place as he discusses how Hannibal used terrain to his advantage in battle.

This tapestry is woven in time, also, with the life cycles of organizations and individuals, along with their predictable challenges and crises, providing insightful psychological threads. For instance, Kluth illustrates why self-understanding and a strong grasp of one’s own identity are so important to effective leadership by explaining the source of Hannibal’s fierce sense of mission: a blood oath he swore to his father and his desire to emulate his father’s relentless antagonism toward Rome. And then he jumps in time, using vignettes about people such as Eleanor Roosevelt and novelist Amy Tan to show that emulation is one of only three possible responses to parental authority: Some people rebel against their parents; others spend their lives searching for lost or absent parents. Kluth also discusses the influence of his parents on his own life and his relationship with his great-uncle, Ludwig Erhard, the architect of Germany’s post–World War II recovery.

The effect of this meticulously crafted structure on the reader is sometimes revelatory. You are riding along, enjoying the stories, when suddenly, in the shock of recognition that the ancient Greeks called anagnorisis, you realize that the story is about you and your organization, and a meaningful pattern emerges in what seemed like a series of inexplicable actions and random events. You may realize how much of your personal striving has been driven by a desire to find an emotionally absent mother or rebel against an overpowering father. Organizationally, you may come to understand that your company’s success has become a prison, locking it in place, and that failure can bring learning and liberation.

The revelatory potential of the book continues as Kluth looks for other useful patterns. For example, some people, like Hannibal, live goal-driven lives that are clearly directed from the very beginning. But people on these “hero” trajectories, such as Meriwether Lewis of Lewis and Clark fame, sometimes achieve their greatest successes early in life, and then run the risk of spending the rest of their lives unhappily in life’s shallows. Others live “summoned” lives: They are the searchers and wanderers, who struggle to find their mission only to achieve their success much later in life.

As you might expect with a book whose leading character was the greatest strategist of his time, there is a full complement of lessons here to help us understand proper alignment of means with ends. Hannibal won battle after battle, but he never won the war because he could not conquer the city of Rome itself — the empire’s center of gravity. Kluth uses this to illustrate how easy it is to let the means eclipse the ends. He cites the clash between Douglas MacArthur and Harry Truman over the use of atomic weapons in the Korean War as another case in point. MacArthur wanted to win at any cost, using atomic weapons to do so if necessary. Truman realized that the real goal was a political accommodation with China — winning the Korean War was a means to that end, not an end in itself.

At the beginning of the book, Kluth cites Rudyard Kipling’s injunction: “If you can meet with Triumph and Disaster / And treat those two impostors just the same.…”

By the end, it is abundantly clear what Kipling meant. Neither triumph nor disaster is what it seems. Triumph can lead to overconfidence, which is often followed by destruction; disaster, on the other hand, is often a prelude to renewal. This wise book helps readers see through the illusions of success and failure to the realities hidden beneath their surface.