← When Metrics Become Targets Part II: Wicked Problems Don’t Throw the Past Away →

The death of Margaret Thatcher, Britain’s Prime Minister from 1979 to1990, and her impending funeral have aroused passions and divisions as fierce as those when she was alive. Conservative Prime Minister, David Cameron, recalled parliament from its Easter recess to allow members to pay tribute to her. It is standard practice for both the Commons and the Lords to eulogize former prime ministers on their demise, but very unusual for parliament to be recalled. Some members of the Opposition fiercely criticized the move as a Tory attempt to represent Thatcher as a national figure, when during her time she was a quintessential partisan one.

The partisan nature of her legacy was clear in the street parties that erupted on the news. Her foes sang, “Ding-Dong! The Witch is Dead” from The Wizard of Oz to celebrate her passing. A Facebook campaign succeeded in raising the song to the top forty, confronting the BBC with the dilemma of whether to play the tune or not on Radio 1, which usually does a top 40 countdown on Sunday afternoons, playing each song in its entirety. They have opted to go with an abbreviated version of it in conjunction with a news bulletin to explain its rise on the charts. In Ireland a wall mural read “Iron Lady: Rust In Peace”.

What is one to make of all of this? In this blog I apply an ecological perspective to the “Iron Lady” and her legacy. As regular readers know, the ecological perspective views organizations as conceived in passion, born in communities of trust, growing through the application of reason and maturing in power. Powers tends to freeze organizations and lock them into the status quo. This status quo need not be a static monolithic one – it can be dynamic one of the gridlock variety, a Gordian knot that cannot be untied but must be cut. The latter was the case in Britain in the 1970s. The country seemed to be in a spiral trap of stagflation – inflation without growth – industrial unrest and a political malaise with the two parties poles apart. The Conservatives under Harold Macmillan (Prime Minister 1957-63) and Edward Heath (Prime Minister 1970-74) were supporters of the status quo. Labour under Harold Wilson (Prime Minister 1964-1970 and 1974-76) and James Callaghan (Prime Minster 1976-79) were avowed socialists. The electorate was sharply polarized, with activists like the Marxist union organizer Arthur Scargill building a power base in the moribund coal industry, where hundreds of mines employed nearly a quarter of a million of workers. Each party catered to its extremists, creating an “either/or” political dynamic, reminiscent in some ways of the current situation in American politics.

Onto this scene came Margaret Thatcher playing a role best described as the political equivalent of a corporate turnaround guy.  Turnarounds are usually conducted under the most desperate of conditions and decisive action is needed to save the organization. The turnaround mantra is “Cash is king”, because cash buys time, and the best sources of cash are to stop operations that are bleeding, sell those “non-core” assets that can be sold and strip the organization down to its strategic essentials. This requires the doing of a lot of unpleasant things that should have been done years ago. This upsets a lot of people. This means, in turn, that all opposing power bases, actual or potential, must be addressed; allies must consulted in advance and enemies must be co-opted, neutralized or destroyed.

Thatcher’s two largest opposing power bases were the Tory establishment in her own caucus and the extreme left wing of Labour that held the whole party in its thrall. The conservatives had to be changed from the party of order to a party of movement and the socialists’ power bases had to be destroyed. She embraced a vigorous free market philosophy coupled with individual self-reliance, proclaiming herself to be a “conviction politician” not a “consensus politician”. Her resolve during the initial pain of the program was clear when she faced up the “wobblies” in her party and declared, “the lady is not for turning”. 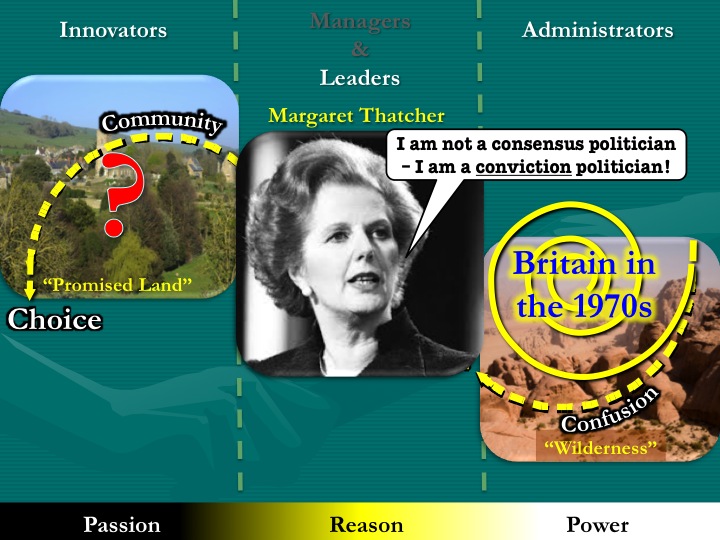 Margaret Thatcher on the back loop of the ecocycle

In April 1982, the Argentinian military junta, in an effort to shore up its popularity at home, invaded the Falkland Islands. Thatcher, against the advice of many, sent a task force to recapture them. The ten-week war that ensued was successful in creating a surge in patriotism in the United Kingdom. At about the same time her drastic economic measures began to pay off, with reduced inflation and a falling pound that boosted exports. The combination of military triumph and economic improvement ensured a landslide victory for the Conservatives as the moderates and extremists in Labour split apart. Thatcher then set about either closing down or selling off a host of failing nationalized industries.  She took on the National Union of Mineworkers and won, pushing her vision of popular capitalism. There were also triumphs on the international front in her close relationship with Ronald Reagan and her work with Mikhail Gorbachev in his attempts to change the Soviet Union.

Loss is Stronger Than Gain

Despite her many successes, Margaret Thatcher remained a divisive figure and will do so for the foreseeable future. From an ecological perspective the root of this problem lies in her underdeveloped social sensibility and inability to empathize with those most affected by her policies.  As far as she was concerned workers were losing their jobs and the social safety net was there to catch them. As far as workers in industries like the coalmines were concerned, they were losing their communities and their identities, the narratives that sustained them from one generation to another. No social safety net could restore such a loss; they felt as though their hearts had been ripped out.  In the world of corporate turnarounds we find the same phenomenon. In the process of doing what has to be done, turnaround guys tend to trample over the organization’s values. They should not stay too long after the heavy lifting is done because they are no longer trusted by the organization.

In The New Ecology of Leadership I write at some length about “negativity dominance”, that negative events have a much stronger and more lasting effect on us than positive ones. This seems to lie at the root of Kahneman and Tversky’s prospect theory that demonstrates conclusively that the pain of loss is experienced much more severely than the pleasure of an equivalent amount of gain. Shakespeare understood this well when he wrote, “The evil that men do lives after them; the good is oft interred with their bones.” For the moment, that appears to be Thatcher’s status in the minds of many Britons.

Margaret Thatcher could not empathize with the coalminers but perhaps no one single-minded enough to pursue her policies could have done so. On the other hand, her actions enabled the rise of a moderate Labour politician like the charismatic Tony Blair and created his ability to govern from the “radical centre”. From an ecological/systems perspective, the good that Margaret Thatcher did will live on and the evil will be buried with the last of those who remember working in the mines* and living in the communities that flourished and then died with them.