← Innovation at Yahoo – Where Is the Gemba? The Decline of Detroit: An Ecological Interpretation →

Can Rome be Renewed? It Will Take a Miracle…

Is there such a thing as a disruptive religion? Two thousand years ago Christianity certainly qualified as such. It disrupted the then-ruling establishment, making a clear distinction between those things that belonged to God and those that belonged to Caesar. Generations of its followers told compelling narratives and its scriptures made new meanings that over the centuries were adopted by millions. It prospered mightily.

The technology of saving souls, however, has not changed much since then. Thus today we do not think of religious organizations, like the Roman Catholic Church, as being subject to technological obsolescence and disruptive innovation. But they are subject to the ecological dynamics that all large-scale, successful organizations experience.

Regular readers of this blog will be familiar with the sequence: enterprises of all kinds, religious or secular, social or commercial, public or private, criminal or clean are typically conceived in passion, born in communities of trust, grow through the application of reason and mature in power. They begin their lives as small, entrepreneurial, outward-looking communities, struggling for resources and support. Often they battle against apparently overwhelming odds to promote a new product or service for which a need is not yet widely felt. If they are religious movements, they will often face overwhelming power arraigned against them. They have to create communities because in the beginning there may be no “markets”. Over time, if they are successful, those communities will become markets and a logic and strategy for the enterprise will emerge. There may be tremendous growth and a huge expansion of people and facilities. To handle that scale the organization will have to become modular (specialized) and stratified (hierarchical); it will become a bureaucracy.

Initially the bureaucracy will likely be an enabling one, with virtuous habits and routines that are embodied rather than imposed. It will have a clear sense of its mission that the organization serves. But over time, as resources become centralized, members of the organization start to swivel inward to face the management hierarchy. As the care and feeding of the bureaucracy start to outweigh concerns for the customers, they turn their backs to their clients. They become exquisitely sensitive to what is happening inside the organization and deaf to what is going on outside. What was once a productive bureaucracy gradually morphs into a self-regarding political structure of dominance, where the original purposes of the institution no longer play any role in decision-making. The means have run away with the ends. The stage is set for crisis and destruction, but with the possibility of renewal. Typically this doesn’t happen overnight. Organizations can cycle for lengthy periods in the first stage of the cycle of renewal that I call “wilderness”. This is a rollercoaster time of ups and downs and the organization often takes on a Jekyll and Hyde character. Over time, however, the “ups” gradually get lower and the “downs” steadily get deeper, until the crisis becomes manifest to all.

To an outsider (and a non-Catholic) this seems to be the stage that the Roman Catholic Church has reached. It has been lost in the wilderness for at least forty years, ever since the failure of the Second Vatican Council (1962-65) to fulfill its promise of renewal. In 2005, reforming Catholic theologian Hans Küng wrote that the terms from that council of modernization, dialogue and ecumenicalism were given only lip service and were replaced by restoration, mastery and obedience. In his criticism of Pope John Paul II, Küng wrote “A mediocre, rigid and more conservative episcopate will be the lasting legacy of this papacy.” It now seems that he was right. In ecological terms, the Church is now headed onto the back loop of the ecocycle. 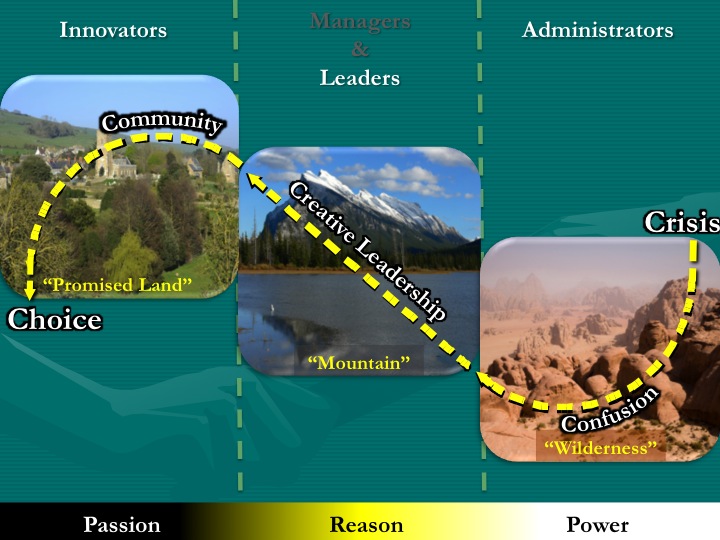 The Back Loop of the Ecocycle

What to do? In a commercial organization one would probably reach for an outsider first, a “turnaround guy” who would shake up the bureaucracy, strip the formal organization down to its essential core and get rid of management indulgences and anything else that did not support the central mission.  Once this is done, the next task would be set about revisiting that mission. Often the “turnaround” guy will not be the right person to do this. Inevitably he will have trampled over some core organizational values in the process of challenging the status quo and he will not be trusted. What is needed is someone who is trusted and is capable of articulating new rules of interaction and a renewed vision, preparatory to re-forming the community of trust. Scouts and hunting parties would be sent out into the diaspora of believers and former adherents to get their opinions; great revival meetings would be held – Vatican III in the case of Catholicism. In The New Ecology of Leadership I call this second stage “mountain” which captures the idea of the journey out of the wilderness and the hard work required to get a sense of the new community.

This new community, the third stage in the ecological process, is the “Promised Land”, a place of milk and honey – resources for young people. Getting there will require different kind of leadership again. In the Old Testament, Moses, the visionary and lawgiver, begins to think that it is all about him and he does not make it to this stage: Joshua takes over. Many of these different leadership roles can be distributed among the members of an egalitarian team who trust each other. The organization takes its direction from whichever leadership role seems most appropriate the time.

What are the chances of Rome being renewed, of the Roman Catholic Church being able to make it through the challenging renewal process, without looping back into a stable competency trap? One clear problem is the limited choice of successors to Benedict XVI. If one were looking for an outsider (someone like a Hans Küng?), the College of Cardinals would not be the first place one would think of! Some observers were surprised when, in 2005, Pope Benedict and Küng met over dinner to discuss Catholic theology, but the sanctions that Küng attracted because of his criticisms of the Church have not been lifted. I know nothing about the individual cardinals or their factions, but the conclave seems unlikely to contain any radicals – the next Pope will be a moderate at best. A second problem is the flexibility of the leadership styles required on the renewal loop of the ecocycle. In a commercial organization one can assemble a multi-skilled team, different members of which can play the many different roles required. If that doesn’t work, the Board of Directors can change the CEO. One cannot do that with Popes.

In his New York Times op-ed Küng describes the church as “coldly ossified”. What will it take to put flesh on its bones, to bring it back to life? Probably a miracle; but, of course, the Church has a history of those…