← Can Rome be Renewed? It Will Take a Miracle… New Beginnings: Stories of Resilience and Renewal →

The Decline of Detroit: An Ecological Interpretation

The value of an ecological perspective is that it views organizations primarily as movements, rather than as structures and it can be used at many different levels of analysis. It can be applied, for example, to the life of a city.

Detroit is currently in the news because, after over 300 years in existence, it seems to be in a spiral of decline. A century ago Detroit was a vibrant automobile ecology with hundreds of automobile manufacturers and “penumbra” of thousands of machine shops, metal-bashers and other suppliers that comprise an automotive ecosystem. The industry is unmatched for the range of technologies and skills that it requires; Peter Drucker called it the “industry of industries”. The city grew six-fold between 1900 and 1930 and reached its maximum population of just under 2 million in 1950. Then it was America’s fifth largest city. In 2010 less than 720,000 people lived there and it was ranked #18.

Many reasons have been advanced for this deterioration. Obviously the changes in the automobile industry are a major component of the problem. The automotive industry in the city went through a lengthy consolidation phase that culminated in the Big Three oligopoly of General Motors, Ford and Chrysler. In the early 1970s the first of the “oil shocks” marked the end of the era of cheap energy on which the automobile industry had been built. The Big Three came under ferocious attack from the Japanese who had perfected their ability to build small cars with low costs and high quality via their “lean” manufacturing process. As the industry moved away from Detroit, the city lost its affluent tax base. Early in the 21st Century both GM and Chrysler had to go through the renewing fires of bankruptcy before they could compete effectively.

Of course the ecological perspective could be applied to the auto industry as well as its component firms, but this blog is about the city and why it has faired so poorly. After all, Buffalo and Cleveland went through similar declines without quite such horrible results and Pittsburg seems to have been able to reinvent itself after its steel industry went away.  What went wrong with Detroit?

The Loss of Community

What lies at the roots of Detroit’s problem seems to be the absence of community. As urban planner, Pete Saunders, points out in his discussion of the problem, ideally people live in neighbourhood contexts where schools, shopping, social and recreational activities are all connected in a defined space. In Detroit relatively few such neighbourhoods exists. Instead, Saunders suggests, the city gave itself over completely to the industry that made it famous. It became an extension of the factory. If we were to put the situation in ecocycle terms is would look something like this: 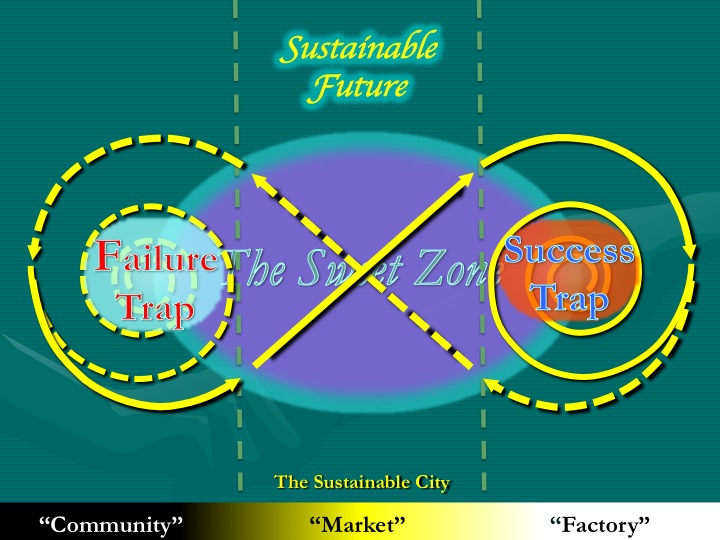 Cities are born as communities and become communities of communities. They grow through trade and mature as centres of industry – factories in the industrial era. Ideally they should be diversified, so that they do not become dependent on a single industry. To  this end they need to retain their roots in community, so that new economic activities can continually be developed. Cities, like other organizations, must find the “sweet zone” between the twin traps of failing communities and that of a success formula taken too far. In a success trap the means to prosperity become ends in themselves and are pursued far beyond their sensible limits, setting the system up for crisis and destruction.

In the case of Detroit the politicians and the planners abdicated their responsibility to keep the city’s growth sustainable. This failure was aided and abetted by numerous factors.  For instance, local governments, like all organizations, face a choice in how to structure themselves; they have to deal with the dynamic tension between centralization (efficiency) and decentralization (responsiveness). Ward or district-based councilors are responsive to local needs but can be parochial; councilors elected on a city-wide base get the big picture, but can be wooed by large interests. Corruption can be a problem with either model. In 1918, under the influence of the Progressive Movement and its drive for efficiency, Detroit moved to a city-wide model of elections. Local communities lost their voice and the big interests spoke louder. For the next fifty years local government did whatever the automotive industry wanted them to do, even if it meant building freeways through neighbourhoods, surrendering a transit network or allowing industrial zones to disrupt communities. The downtown area was allowed to dwindle away and no longer acted as a magnet to draw people into the city at night.

As a result, Detroit fell into a success trap and was unable to stop the once-virtuous behaviours that were steadily becoming vices in the changed situation. Instead of being a diversified “forest”, that contains a variety of species of different types and ages, they turned themselves into a small “grove” of three large “trees” that was the automobile oligopoly. The effect was to create a giant, over-connected system through which resources had only a few ways to flow. If the industry prospered, all prospered with it; if it failed then all failed. When they reach this stage, organizations take on a Jekyll and Hyde nature, with short spells of optimism interrupted by longer periods of despair. Government becomes increasingly dysfunctional: even if they are aware that they are in a trap, politicians seem powerless to do anything about it. Short-term palliatives are pursued, even if people know that they are just kicking the can down the road. Instead of being given pay increases, workers are given enhanced pension benefits and the reporting of resulting liabilities is fudged or falsified. Basic routines begin to break down and the spiral trap tightens as the organization descends into chaos. Change now can come only from the outside.

This seems to be the stage that Detroit has now reached. The State of Michigan has stepped in and appointed an Emergency Financial Manager. He will play hardball with the city’s creditors, using the threat of bankruptcy to extract concessions from them. Either way Detroit’s liabilities will be significantly reduced, although the huge pension obligations can probably be modified only via bankruptcy. That will prepare the soil, literally and metaphorically, for new growth.  If Detroit does not succeed in reinventing itself, then nature will step into the vacant space. It will take centuries, but prairie plants will bloom where the factories once thrived and what was once a proud city may become again a scattering of small settlements on the banks of a mighty river.

2 Responses to The Decline of Detroit: An Ecological Interpretation