Bad Apples or Bad Barrels? An ecological perspective on ethics in management 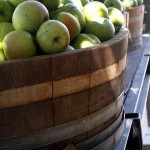 A Barrel of Apples

In my last two blogs I have suggested that many of our institutions have lost their sense of purpose, as their means to success have steadily become ends-in-themselves. This loss of purpose has been accompanied by a steady increase in ethical lapses in management, which seem to have escalated hugely over the past few years.  During his presidency George W. Bush became well known for always attributing these deviations from ethical standards to “bad apples”. If people were greedy or stole or abused their power, he said, the problem did not lie with the system. It was just bad actors – “evildoers” – who were responsible for the problem – they should be investigated, arrested, tried and punished.

In Western thought this context-free perspective on human behavior can be traced back to Plato and beyond. In the business schools we can track it back to the efforts to professionalize the field of management in the late 1950s and to turn its study into a social science. The assumption was that people ought to be rational in a logical, context-free way. In an earlier blog I have described this rationality as similar to that of Mr. Spock’s of Star Trek. It was also assumed that people ought to be ethical in a context-free kind of way. Wherever they were and whatever they were doing, they ought to behave ethically. Individuals were thought to “apply” ethics to their behavior, in much the same way that managers applied management principles to organizations.  If individuals didn’t behave ethically, then the implication was that they were “bad” people. Hence the “bad apples” that GWB criticized.

This Platonic perspective on ethics is alive and well today and nowhere more evident than in the form of the “MBA Oath”, which received considerable publicity when it was introduced at Harvard in 2009.  Those for and against the oath have argued whether it is  effective or not, but none have mentioned the Platonic foundations on which it is based. The ecological perspective in The New Ecology of Leadership throws new light on the issue by making a figure-ground reversal between text and context. Let me explain: 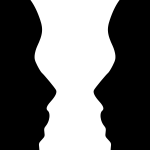 I have mentioned before that The New Ecology of Leadership does not use ecological rationality to replace the economist’s concept of logical rationality but to embrace (and contain) it. What do I mean by this? One way of thinking about it is as a figure-ground reversal. Everyone is familiar with this famous visual illusion – depending on how your interpret figure and ground in the picture, you will see either a vase or two faces looking at each other. Neither view is “right” – it all depends upon your point of view. Of course this doesn’t prevent people who can see the vase arguing with others who see the faces! The problem is that you can’t see them both at the same time: one is always figure, while the other is always ground. Each entails the other.

This entailment of figure and ground suggests what might have happened to management after it was professionalized in the late 1950s. Although the ethical and philosophical assumptions that humans were logically rational were meant to be “context-free”, they effectively became the infrequently-examined “ground” against which management theories and practices were viewed.

The “figures” that become more prominent against this ground were deviations from logical rationality and ethical lapses. The deviations in theory took the form of contrasting perspectives like Douglas McGregor’s Theory X and Theory Y. Theory X was a rational agent’s view of others, while Theory Y was a more humanistic, context-dependent perspective. Tom Peters and Bob Waterman described their book, In Search of Excellence, as a rejection of the “rational model” and their conclusions provoked ferocious arguments in the academy. The more recent rise of leadership in the business schools has its roots in visceral reactions to the rational agents of management.

This means that, when it comes to ethical lapses, the “bad apples” argument is usually wrong. Sure there are evildoers – psychopaths and sociopaths – who will behave pathologically, no matter what the context, but one hopes that they make up a relatively small proportion of the population. A much larger group, possibly the rest of us, except for a few saints, will find their behavior to be context-dependent. The systems in which we live and work can create contexts that will evoke good conduct as well as others that will induce bad behaviour. We have to learn to manage these contexts – design, control, anticipate and even avoid them – both individually and collectively. If we don’t manage these systems consciously, then someone else will. The assumption of logical rationality as the backdrop to management theory and practice simply gets in the way of our understanding the ability of others to game the system to their advantage.

Getting Rid of Our Illusions about Ethics

We become susceptible to the figure-ground illusion because we are trying to make sense of a 3-D world from a 2-D picture. As soon as we move into a 3-D world the illusion disappears. In the same way, the introduction of the additional dimension of context into management thought and practice should dispel the illusion that bad behavior is all about bad apples and has nothing to do with the barrel. It has everything to do with both the barrel and the apples.