The Ecodynamics of Donald Trump: Can The Centre Hold? 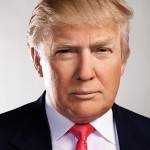 The rise of Donald Trump has been a puzzle to many political pundits and a shock to observers around the world. What explains his appeal and his ability to mobilize people who, for a long time have felt excluded from the political process? Typically populists like Trump arise in times of political unrest, when the existing order is failing and a significant portion of the population feel that there is a need for radical change. But why now in the USA and what are the conditions that have allowed Donald Trump’s campaign for the Republican Presidential nomination to flourish?

These questions becomes easier to understand when one looks at society and its institutions, not as static systems, but as ecological processes. From this perspective successful social institutions are conceived in passion, born in communities of trust, grow through the application of reason and mature in power. Here they tend to get stuck in systemic traps, structures that conserve the habits that made them successful, but render them inward-looking and insensitive to the changes that are going on outside. In his book, The Rise and Decline of Nations economist Mancur Olson described how, over time, vested interests and rent seekers clog the system and prevent meaningful change. Thomas Mann and Norman Orenstein give us a broad overview of this insidious process in Congress in their two books, The Broken Branch (2009) and It’s Even Worse Than It Looks (2011). Most importantly, they outline the changes that have led to the polarization of its members and the emergence of a quasi-parliamentary system, built upon opposition, in a constitutional republic where the separation of powers demands negotiation and compromise.

For a more systemic view of how both parties have unwittingly contrived to build a trap one can to turn to Lawrence Lessig’s fascinating 2011 book, Republic, Lost: How Money Corrupts Congress – and a Plan to Stop It. He showed how an economy of influence has emerged in Washington and bred what he calls dependency corruption. This is not straightforward votes-for-dollars bribery; that’s illegal and happens only rarely. It’s a far more deceptive process. At the root of the trap (in Lessig’s view) is the money that members of Congress need to run for office. With campaigning almost a nonstop activity (especially since the mid-1990s), so is the need to raise funds. This is a huge distraction from the business of government in its own right. The obvious source of funds is from those who have an interest in legislation, which means that Congress has to be concerned with issues that attract factional interests rather than the broader public interest. As a result Congress’ agenda consists of topics suitable for fund-raising and its members have little interest in simplifying regulation or tax codes: complexity enables them to raise funds from interested parties. Thus the concerns of Congress steadily diverge from the concerns of the population at large. In the medium term participation in the political process may drop but the resentment keeps on building…

Organizations and institutions can spin in systemic traps for decades. After all these are called ‘success’ or ‘capability’ traps and depend on the organization’s default habits that have made it successful. Typically policy will be focused on metrics that have proven to be key indicators of success in the past and these will likely exclude peripheral indicators of trouble. Take, for example, the bi-partisan commitment in Congress to free trade. It seems clear that, at least in principle, free trade should create widespread economic benefits to all parties involved. These are relatively easy to measure, particularly the immediate benefits to consumers. At the same time, however, there are concentrated losses that can devastate communities, destroying families and livelihoods. These are not easily measured and the adjustment process whereby displaced workers, at least in theory, learn new skills to build higher-value products is hard to track, let alone measure. Some economists now doubt that it happens in any significant way.

Economic “Prosperity” but Damage to the Social and Political Ecology

The recent uproar over Carrier’s move of its air-conditioning business to Mexico is a case in point. Carrier is relocating a 1,400-person factory to Monterrey from Indianapolis. South of the border workers will make about $20 a day compared with roughly $20 an hour in the American factory. The economics case for Carrier looks like a no-brainer, even after you take into account moving costs and any differences in education, work ethic, safety etc. But what about the costs in Indianapolis to communities families and livelihoods? The social safety net in the US is flimsy enough but going on welfare is hardly an alternative to well-paid, meaningful work that supports communities and their narratives. The damage to the social and political ecology is very real and hard to detect; that is until popular outrage and disenchantment boil over and give rise to Donald Trump. As one might expect from this thesis, the top four variables that have the strongest correlation with being Trump supporters are whites without high-school diplomas, who describe their heritage as “American”, live in mobile homes and either work or used to work in “Old economy” jobs. The next highest correlation is a history of voting for segregationists like George Wallace…. 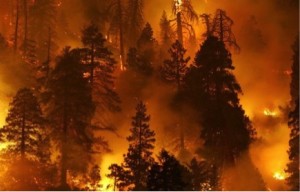 Fire in a California Forest

If this ecological perspective is roughly right it explains why Trump supporters are not concerned by his failure to come up with coherent policies. Trump articulates what they only feel and as long as he gives voice to their concerns they could care less about policy. Attacks on Trump from the Republican Establishment only reinforce their sense of being embattled and solidify their support for him. On the left Bernie Sanders appeals to a different constituency but one that also believes that the political system is broken and needs a revolution to reform it. Hillary Clinton, on the other hand, thinks that one can achieve results only by working within the system. At the moment she seems the candidate most likely to win the Presidency. If she does, the centre will hold – for the moment.

Whether the political centre can hold in the longer run, however, seems to depend on whether both parties, but the Republicans in particular, are sufficiently shocked to embrace radical change. If Donald Trump is the Republican candidate and the Republicans lose control of both the House and the Senate as a result, then they are likely to have to adopt real reform. This will mean taking seriously the advice of their remarkably hardheaded 2012 post-election autopsy and realizing that the coalition they have relied on for so long is irretrievably broken. To stand any chance of restoring their fortunes they have to de-emphasize ideology and move to the centre where they can appeal to a much broader range of voters especially the Hispanics. Only then can a bipartisan approach be developed toward escaping from the complex systemic trap into which American politics has fallen. If they can do this, then Donald Trump will be seen, in hindsight, as the necessary destructive force, the fire in the forest, so essential to the renewal of ecosystems. If they don’t, the fire will be bigger next time…