Renewing Rome Part III: The Future is the Means – the Present is the End 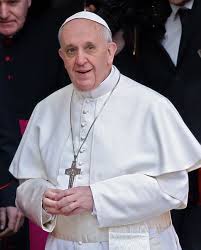 Last week I took an ecological perspective on Pope Francis and his efforts to renew the Roman Catholic Church (RCC). His chosen role of prophet (rather than the other two religious offices of priest and king) is to bring passion – faith, hope, confidence, trust – back into the institution. One of his vehicles for doing this, apart from his own humble lifestyle and actions, is his choice of poetic, metaphorical language and the use of narrative – stories – as his medium.

Pope Francis’ use of evocative language, dynamic analogies and his emphasis on the role of narrative, rather than philosophical and theological arguments are quite striking compared with that of his predecessors, yet characteristic of the creative leadership required on the back loop of the ecocycle. Professor Jay Conger identified the key elements of transformational leadership in a 1991 Academy of Management Executive article called “Inspiring others: the language of leadership”. The first is the ability to frame the purpose of the organization in a meaningful way; the second is the skill to use language to give emotional power to the message. Last week we saw how Pope Francis expressed the mission of the RCC as a military field hospital whose primary role it is to deal with the spiritually wounded. This image embodies all the values and aspirations that he believes to be important and supplies a test against which all action can be measured. It even suggests an approach to the problems of sexual abuse that have plagued the institution:

“This church with which we should be thinking is the home of all, not a small chapel that can hold only a small group of selected people. We must not reduce the bosom of the universal church to a nest protecting our mediocrity. And the church is Mother; the church is fruitful. It must be. You see, when I perceive negative behavior in ministers of the church or in consecrated men or women, the first thing that comes to mind is: ‘Here’s an unfruitful bachelor’ or ‘Here’s a spinster.’ They are neither fathers nor mothers, in the sense that they have not been able to give spiritual life.”

Learning and Growth: The Future is a Means, the Present is the End

Pope Francis’ language is rich and sensual. When he talks of the “freshness and fragrance” of the Gospel he makes it sound like a great meal ready to be eaten! These are images that everyone can understand and they carry hints of dangers and possibilities that are apparent to all. This visceral sense of urgency and immediacy, that everything is happening, right here, right now, reminds me of the Quakers of the 17th Century and their approach toward the scriptures. They avoided anything that focused on the past; their entire concern was with the present. They accepted only the Gospel of John and Matthew’s Sermon on the Mount, making them the least dogmatic of all the Christian sects.

This focus on the present allows an emphasis on learning and growth. It uses a vision of the future as a means and the present as an end, rather than the other way around. Harvard Business School’s Fritz Roethlisberger put it this way:

“It should be obvious that growth and learning take place in the present. . . . The past is gone and the future is uncertain. . . . Some of you, I fear, tend to think of the present as a means and the future as an end. . . . What if I suggested to you that the future is the means and the present is the end?…Are there not two different kinds of goals? . . . one kind which takes all meaning and significance out of the present, and . . . another kind of goal which makes the present more meaningful and significant. . . . By means of [the first kind] we make ourselves miserable in the present . . . we create a target just in order to shoot at it and we make ourselves miserable every time we fail to hit the bull’s-eye. . . . In the case of the second kind of goal, we create the target to perfect our shooting here and now. This kind of goal works for us. It makes meaningful and significant the present. It facilitates growth, learning, the sense of adventure and exploration.” (“The Secret of Success.” In Man-in-Organization: Essays of F. J. Roethlisberger. Cambridge, Mass.: Belknap)

Here is what Pope Francis says in his interview in much the same vein:

“Our life is not given to us like an opera libretto, in which all is written down; but it means going, walking, doing, searching, seeing…. We must enter into the adventure of the quest for meeting God; we must let God search and encounter us… You are not setting the time and place of the encounter with him. You must, therefore, discern the encounter. Discernment is essential.”

A Movement Not a Structure

The Pope sees the church not as a structure, but as a movement, a community of relationships rather than a hierarchy of rules. He regards himself and the bishops as leaders who, like shepherds, must also be guided by their flocks who “have a flair for finding new paths.” He understand that the role of the Roman Curia, the bureaucracy, is an enabling one not an enforcing one, “They are instruments of help. In some cases, however, when they are not functioning well, they run the risk of becoming institutions of censorship.”

Lastly, Pope Francis recognizes the importance of context and process. He quotes St. Ignatius, the founder of the Jesuits, “…great principles must be embodied in the circumstances of place, time, and people.” This implies too that young and old may seem to be out of step with each other:

“The young Catholic churches, as they grow, develop a synthesis of faith, culture and life, and so it is a synthesis different from the one developed by the ancient churches. For me, the relationship between the ancient Catholic churches and the young ones is similar to the relationship between young and elderly people in a society. They build the future, the young ones with their strength and the others with their wisdom. You always run some risks, of course. The younger churches are likely to feel self-sufficient; the ancient ones are likely to want to impose on the younger churches their cultural models. But we build the future together.”

Pope Francis’ interview and his actions will no doubt disturb the Roman Catholic establishment and all those who have a vested interest in the status quo. His journey and the progress of the institution are going to be fascinating to watch for all students of leadership and management.