← Harvard Business School: The Reality Show? Renewing Rome Part III: The Future is the Means – the Present is the End →

Six months ago, before the election of Pope Francis, I wrote (as a non-Catholic) about the challenge of change in the Roman Catholic Church (RCC). I depicted the church as wandering the wilderness for the past 50 years, ever since the failure of the Second Vatican Council (1962-65) to deliver on its promise of renewal. I showed the church entering the back loop of the ecocycle and suggested that if the church were a secular organization this would be the time to hire an outsider, a turnaround guy, who would shake up the bureaucracy, strip the formal organization down to its essential core and set about revisiting the institution’s mission. I wrote that it would take a miracle for this kind of change to happen…

So far Pope Francis seems to fit the billing. His selection was a surprise and he is about as radical an outsider as could be found in the College of Cardinals – the first non-European pope in 1300 years, the first from Latin America and the first Jesuit. The latter choice is particularly interesting as historically the Jesuits, like some of the other holy orders, have been change agents in the Church. It was the Jesuits who lead the Counter-Reformation that curbed the excesses of the Renaissance Church, put the focus back on parish and community and the Christian way of life, together with an emphasis on the education of priests on how to perform their functions.

Pope Francis, beginning with the selection of a name that none of his predecessors dared choose, for fear of the expectations it would create, has set out to distance himself from “business-as-usual”. As Hans Kung has pointed out, Pope Francis has set out to demonstrate his humanity, eschewing the jeweled mitres, ermine capes and other trappings of office. One might say that he has, quite literally “come down to earth”, bringing the papacy with him. Even his language is down to earth. Last week Pope Francis gave a wide-ranging interview that has instantly changed the tone of the institution. It suggests that he has a very clear idea of what has to be done.

The Role of the Prophet

From an ecological perspective Pope Francis is focused on the renewal of the ecosystem that is the RCC. On the ecocycle I have placed him in the centre of the back loop, creatively leading the institution out of the wilderness that it has been in for so long to climb the mountain for a renewed vision of the promised land: 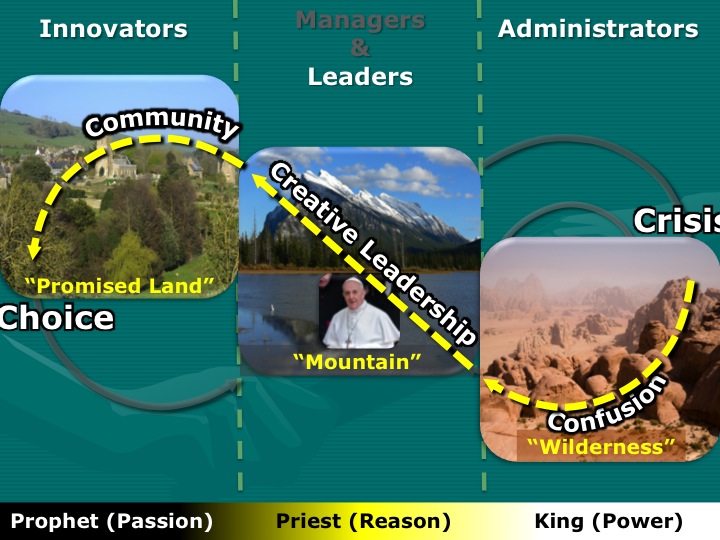 Pope Francis as a Creative Leader

Along the bottom I have shown the three holy offices or functions that, according to Christian theology, Christ performed in his earthly ministry. From an ecological perspective they can be seen as ecological phases in the development of human ecosystems. Organizations and institutions, even religions like the RCC are conceived in passion, born in communities of trust, grow through the application of reason and mature in power. Power tends to freeze them, setting the stage for crisis and destruction but with the possibility of renewal. Of the three offices the prophet (passion) is concerned with revelation of the will of God; the priest (reason) is an intermediary that reconciles humans and God, and the king (power) governs, both “restraining and conquering”. It is quite clear from his interview that Pope Francis sees his primary function as that of prophet articulating the mission of the church and he understands the necessarily disruptive role that this will play:

“In the church, the religious (i.e. members of the religious orders) are called to be prophets in particular by demonstrating how Jesus lived on this earth, and to proclaim how the kingdom of God will be in its perfection. A religious must never give up prophecy. This does not mean opposing the hierarchical part of the church, although the prophetic function and the hierarchical structure do not coincide. I am talking about a proposal that is always positive, but it should not cause timidity. … Being prophets may sometimes imply making waves. I do not know how to put it…. Prophecy makes noise, uproar, some say ‘a mess.’ But in reality, the charism of religious people is like yeast: prophecy announces the spirit of the Gospel.”

The Pope describes the Jesuits as an institution that is always “fundamentally in tension” between Christ and his church, which are “two fundamental points of reference for its balance and being able to live on the margins, on the frontier.” The relationship between these two points is “both…and”, not “either/or”. It is clear that he sees this tension, between the individual and the institution, people and rules, as being a challenge for the church as a whole, with the current balance currently tilted too far toward a pre-occupation with rules,

He calls for a new balance;

“The dogmatic and moral teachings of the church are not all equivalent. The church’s pastoral ministry cannot be obsessed with the transmission of a disjointed multitude of doctrines to be imposed insistently. Proclamation in a missionary style focuses on the essentials, on the necessary things: this is also what fascinates and attracts more, what makes the heart burn, as it did for the disciples at Emmaus. We have to find a new balance; otherwise even the moral edifice of the church is likely to fall like a house of cards, losing the freshness and fragrance of the Gospel. The proposal of the Gospel must be more simple, profound, radiant. It is from this proposition that the moral consequences then flow.”

I love that “disjointed multitude of disciplines to be imposed insistently”. It makes the RCC sound just like any large bureaucracy. His message, in other words, is focus on the mission; everything that does not help the mission is baggage.

And what is that mission? Pope Francis compares the church to a military field-hospital, located in the forward areas and dealing with just the critical issues:

“I see clearly that the thing the church needs most today is the ability to heal wounds and to warm the hearts of the faithful; it needs nearness, proximity. I see the church as a field hospital after battle. It is useless to ask a seriously injured person if he has high cholesterol and about the level of his blood sugars! You have to heal his wounds. Then we can talk about everything else. Heal the wounds, heal the wounds…. And you have to start from the ground up.”

To be continued next week