← Fire and Ice: All I want for Christmas is a Sump Pump! Words are Easy, Numbers can be Faked, Behaviour is Difficult: The Case for Embodied Management →

Every Manager a “Janus”: Ambidexterity and the Ecological Perspective 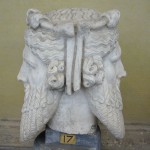 Statue of Janus from the Vatican (Courtesy of Wikipedia)

I can’t believe it’s almost January again, but perhaps it could make a timely theme for a blog. The month is named after Janus, the Roman god of thresholds – beginnings and endings – who looked two ways, toward both the past and the future. The concept has a very ancient history; although there was no Greek equivalent, the idea of a god with two faces can be found in Babylonian art and other Indoeuropean religions. The general concept floats in and out of Western consciousness, where it has been particularly popular with creative people in many fields.

“Janusian thinking” was a phrase coined by psychiatrist Albert Rothenberg in his 1979 book, The Emerging Goddess: The Creative Process in Art, Science, and Other Fields to describe a process of “actively conceiving two or more opposite or antithetical ideas, images, or concepts simultaneously”. He discerned use of the practice in the work of people ranging from Coleridge and William Blake to da Vinci and Michelangelo, Rembrandt and Picasso, Kierkegaard and Nietzsche, Poincare and Einstein.  In the field of management its latest incarnations are in Roger Martin’s idea of The Opposable Mind and in the academic theory of ambidexterity. The latter concept is the subject of an excellent issue of the Academy of Management Perspectives. As an aside, let me say that membership in the Academy and access to their journals is still one of the best deals in the management field!

“Ambidexterity” is a management term first coined in 1976 by Robert Duncan and then picked up by Tushman and O’Reilly to help understand how companies could manage both “evolutionary” and “revolutionary” change processes. More specifically it has been used to understand how to manage the tension between “alignment” and “adaptability”. From an ecological perspective, the “ambidexterity” of complex systems is just an aspect of an ecological process and examples from nature as a manager of the tensions between continuity and change are available everywhere. When applied to human organizations the management of these tensions becomes the central activity, making every person in the organization a “Janus”: 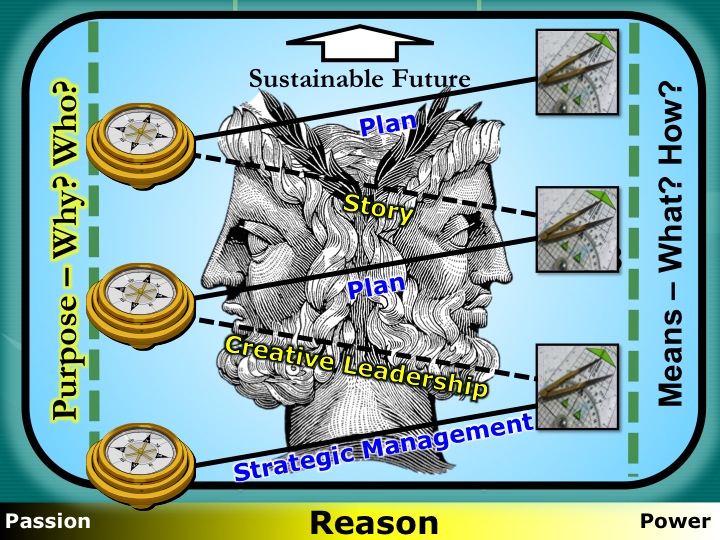 The sweet zone of the ecocycle with Janus

As the diagram shows, in the sweet zone of the ecocycle the every manager is stretched between the “who” and the “why” of ends and the “what” and the “how” of means, both of which must be addressed if the organization is to be sustainable. Two processes – creative leadership and strategic management – connect the poles but proceed in different directions. Creative leadership (a compass) is all about ends and the development of options; strategic management (a map) is about the development of means and the making of choices. The weasel word that everyone uses but no one understands is the idea of “balance” between the two.

Recently the concept of ambidexterity has proven popular in management journals, although interest in it may be peaking and headed for decline. It has never caught on in management parlance. I think that interest in it will be sustained only as part of a renewal of the roots of management thinking and a reformulation of the philosophical foundations on which it is based.

Certainly the general use of a “both…and” mode of thought that ambidexterity promotes is needed, instead of the default “either/or” approach that one finds everywhere. Two weeks ago I blogged about Pope Francis and his efforts to reform the Roman Catholic Church (RCC). “Either/or” thinking was on prominent display in the comments on a recent article about Pope Francis in the Wall Street Journal. Here is my comment on those comments:

“It’s depressing to see how many commentators regard capitalism (and institutions like the RCC) as a static “things”. For them change becomes an “either/or” proposition – capitalism or socialism, doctrine or liberation theology. If, on the other hand, one regards institutions and organizations as ecological processes, rather than as economic, religious or political entities, everything changes.  One begins to see how institutions and organizations are conceived in passion, born in communities of trust, grow through the applications of reason and mature in power. Here they tend to become stuck and unable to change, which leads to crisis and destruction but with the possibility of renewal, catalyzed by a particular kind of leadership.   From this “both…and” perspective, Pope Francis is making a brave attempt to renew a pair of decadent institutions – capitalism and the RCC. It’s three hundred years since Anglo-Saxon capitalism was founded in the passions and practices of the Nonconformist sects of England and America and their mission and purpose has long been forgotten. We are now stuck in the power phase. In the case of the RCC, the Jesuits and other holy orders have always been the agents of change – clamped to the side of the church – of it, but not “in” it. It was the Jesuits who lead the Counter-Reformation that curbed the excesses of the Renaissance Church, put the focus back on parish and community and the Christian way of life, together with an emphasis on the education of priests on how to perform their functions. Now this outsider, this Pope “from the ends of the Earth”, is offering a lesson in change management to everyone who holds capitalism and democracy dear and wants to see them renewed.”

Happy New Year to all and I hope that 2014 offers new opportunities and possibilities!

One Response to Every Manager a “Janus”: Ambidexterity and the Ecological Perspective