← Pope Francis – the Undercover Boss: “Sell your desk!” Every Manager a “Janus”: Ambidexterity and the Ecological Perspective →

Fire and Ice: All I want for Christmas is a Sump Pump! 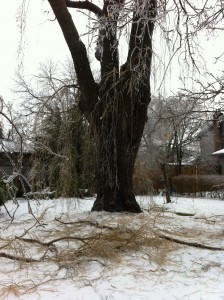 It’s been a horrid two weeks week weather-wise in Southern Ontario. First we had a hard freeze, making it unusually cold for this time of the year, then we had a heavy snowstorm, which dumped about 30 cm of snow on us over a period of two days and now, over this past weekend, we had a major ice storm, which coated every branch and twig with 20-40 mm of ice. When I got up on Sunday morning and went outside I could hear large branches snapping throughout the neighbourhood. The wind was wafting through the woods in little gusts and you could hear the trees groaning as they swayed ponderously, unable to snap back resiliently against the forces being imposed on them.

All of which reminds one of change and how nature builds resilient ecosystems by continually stressing them. Many forests use fire and insect attack to do this and technically the forests of Southern Ontario are a wind-burst ecology; that is, they rely on microbursts of wind during storms to clear open patches into which new growth can come. But the weekend storm was a sharp reminder that they are also an ice storm ecology, using freezing rain as a giant pruning tool.

But enough of ecology for the moment: I was particularly aware of the weather because our house’s sump pump had stopped working; or rather it wouldn’t stop working – it was pumping but the water level wasn’t going down. The motor was getting hot, as they are not designed to run continually. Most Canadian houses have an internal pump that sits in a small sump in the basement and pumps out the ground water that flows into the lower levels, particularly during the spring thaw. They have a float, rather like those that one finds in toilet tanks, except that it works the other way around; when the water level in the sump gets high the pump runs until it drops below a certain level. The water is pumped outside, either into a storm drain or into the garden. About two years ago I had had to change our discharge to flow into the garden and it had worked fine but now the water wasn’t flowing…

Our sump is on a corner of the house and we get roots coming through the wall from the giant willow on our front lawn. After pumping out the sump with a small portable pump to lower the water level and carrying it away in buckets, I looked into the sump and saw the suction end of the sump pump covered in fine roots. Were they the source of the blockage? After 30 minutes of hard work (it’s a tight, almost inaccessible, space) I had cleared all the roots that I could see and tried the pump again. Nothing doing; the water just swirled around in the bottom of the sump. But in that process I noticed bits of plastic and other debris coming off the pump. Perhaps the roots were inside the pump? Maybe the pump’s impellors had stripped? I would have to take the pump out to look at it…

This was a major job; the pump was cast-iron with a brass non-return valve but everything else was ABS (plastic) pipe with glued joints. One has to cut the pipe with a saw with one hand, while lying on one’s side in a tight space…This required a trip to the hardware store to buy an electric reciprocating saw (I have always wanted one); one hundred dollars later it was mine. After much effort I cut the pipe and pulled out the pump. It was in bad shape, covered in rust and scale, having been in the sump for about 15 years. I decided I was going to need a new pump…This required research on pumps, the quality of which, like that of so many appliances these days, has gone down over the years. Eventually I went to my local plumbing supply store, where some very helpful people guided me through what I would need to finish the job. Just over two hundred dollars later I headed for home with a new sump pump, non-return valve, ABS pipe and fittings and pipe glue…

I won’t tell you how long it took to install everything while lying on my side in a tight space, with glue dripping down my fingers, nor how I had to interrupt my labours to pump the sump manually and carry the water away in buckets… But at last the job was done and I turned on the pump only to find nothing happened. The water just swirled around the bottom of the sump: the outlet pipe was clearly blocked, probably frozen…maybe I should have started there in the first place… 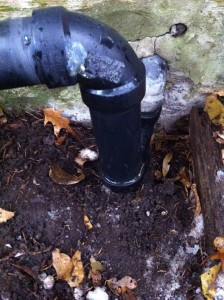 The pipe was frozen as it exited the wall

Now I had to go outside, clear the 30 cm of snow from the discharge pipe and direct a hairdryer on the pipe just as it comes out of the wall. After 20 minutes I switched on the sump pump again…Nothing doing. Now I took my new saw and cut the pipe near where it comes out of the wall – it was choked with ice. After a visit to yet another hardware store to get some ABS “Y” joints I poured very hot water down the pipe from the outside. Success! The pipe cleared and the sump pump pumped. Now all I had to do was to construct an insulating box on the outside of the house that would stop the outlet pipe from freezing as it came out through the wall. Fifty dollars later I emerged from yet another store with all the materials to do the job. I spent a whole morning cutting and fitting polystyrene slabs, glueing them inside (it was too cold for the glue to work outside) and then spraying in insulating foam and reconnecting the whole system with easily-removable, flexible joints.

On Sunday we has no power for ten hours as the ice storm created “catastrophic damage” to the Ontario power grid. By the time power returned the sump pump was covered in two feet of water; to my relief it cleared it all in thirty seconds. So now we have a new sump pump (and one old one that may still work), a clear insulated pipe (to be tested during the next really cold snap) and I have a new electric reciprocating saw (which may help me cut up all the fallen branches from the ice storm). I think of all the money I saved by not calling in a plumber, and the pipe glue is coming off my fingers quite quickly now… Wonderful! May all your Christmases and Holiday Seasons but just as joyful but with a little less hard work and better weather!

5 Responses to Fire and Ice: All I want for Christmas is a Sump Pump!