← Don’t Throw the Past Away Climate Change and Evidence-based Management: An Ecological Perspective [Part I] →

Economics as a Moral Science and the Capitalist Dilemma: An Ecological Perspective 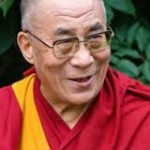 His Holiness the Dalai Lama

As I mentioned last week, Kenneth Boulding was and is my favourite economist and I was reminded again of his work when I came across a New York Times article on capitalism and the Dalai Lama. In it His Holiness suggests that wielding capitalism for good requires a deep moral awareness. Over forty years ago, in his 1968 address to the American Economic Association Boulding outlined his view why economics, like all sciences, could never be value-free for long. In the subsequent article, entitled “Economics as a Moral Science”, he wrote that science is a learning process that ran into two broad difficulties as it proceeded. The first of these was a “generalized Heisenberg principle”: “When we are trying to obtain knowledge about a system by changing its inputs and outputs of information, these…will change the system itself… (sometimes) radically”. The second difficulty is related – that science does not investigate an objective, unchanging world but actually creates the world it is investigating: it moves from pure knowledge to control. At this stage values at all levels in the society become critical.

When it came to economics, Boulding saw it as recording the results of a learning process that involves three systems – threat, exchange and integrative. Threat is the use of power: “Do something nice for me or I will do something nasty to you”. Exchange, as its name suggests, is “Do this for me and I will do that for you”. The integrative system is all about relationships: “Do this for me because of the quality of our relationship”. These triadic sortings are very common in the social sciences. Boulding mentioned the compulsory, contractual and familistic categories of sociologist Pitirim Sorokin and in The New Ecology of Leadership I listed eight others. These ranged from philosopher John Dewey’s impulse, intelligence, habit to management academic Jeffrey Pfeffer’s emergent, rational, constrained, all of which informed the trio of passion, reason and power in the ecocycle.

An Ecological Perspective on the Development of Economics

Boulding’s criticism of neoclassical economics was that, although it had begun as the study of moral philosophy, it had come to focus on the exchange system to the exclusion of everything else. This cut it off from understanding the process of how human preferences and values are formed which is “the fundamental key to the total dynamics of society…(S)elfishness, or indifference to others, is a knife edge between benevolence (integrative) on the one side and malevolence (threat) on the other. It is something that is very rare.”

From an ecological perspective one can look at economics, not just as a structure of knowledge but also as an ecological process that was born in the community of moral philosophy, grew through the application of reason and has matured in power. The neoclassical version of it can be seen as now being in crisis, caught in a power trap where the mathematical means have completely run away with the human ends. This would seem to lead to some of the symptoms that Clayton Christensen contends are a feature of the capitalist dilemma in the West: 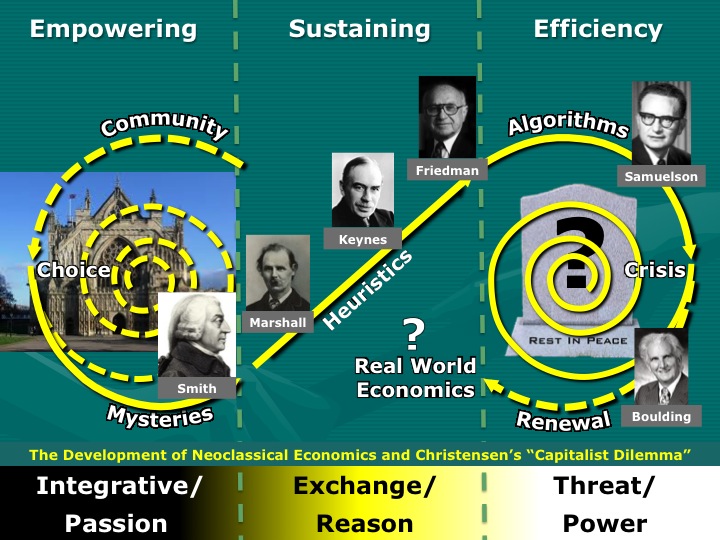 How Neoclassical Economics Got the Way It Is

This rather busy diagram shows at the bottom Boulding’s three social systems (integrative, exchange, threat)) in parallel with the ecocycle’s contexts (passion, reason, power). The “S-shaped” life cycle curve, which is the front loop of the ecocycle has its roots in communities of faith like the medieval church and the rebellions against its orthodoxy (left). Placed on it are Roger Martin’s stages in the development of knowledge – from mysteries through heuristics to algorithms. This is the learning process that leads to the commoditization of experience that Clay Christensen talks about in his work and the labels at the top of the diagram follow his three forms of innovation. His argument is that the American economy needs to come up with more empowering innovations and fewer geared toward efficiency. The ecocycle suggests that it will have to be accompanied by a change in economic thinking.

The diagram shows neoclassical economics either spinning in a vicious spiral into its grave or being renewed under the heading that I have called “Real World Economics”, named after a useful forum on the web. Such a renewal would have to embrace evolutionary economics, identity economics, institutional economics and several other factions. It would owe a lot to Kenneth Boulding for pointing the way. If he was right, economics will have to look again at how personal preferences are formed, sustained and changed. If it is to become a moral science the discipline will have to grapple with the threat and integration systems and not just restrict itself to exchange. In a larger context Sorokin argued for a new mentality that integrated reason, faith and science, but he was unclear on when or how it would come about.  One imagines that His Holiness the Dalai Lama would certainly agree with this goal and the need to work towards it. It’s unfortunate that an ecological perspective suggests that it may take a stern, unambiguous warning from nature before anything of significance will happen…