← The Nature of Uncertainty: Hunting Black Swans Economics as a Moral Science and the Capitalist Dilemma: An Ecological Perspective →

Don’t Throw the Past Away

The late Kenneth Boulding, environmental advisor to JFK and one of my favourite economists, once said that “Anyone who believes in indefinite growth in anything physical, on a physically finite planet, is either mad – or an economist.” I used that quote last week to open my talk to a particularly rambunctious group of Rotarians in Kamloops BC. I went on to suggest that this topic – the future of material growth on an increasingly crowded planet must become the central question in the 21st Century. This is despite that fact that mainstream economics seems incapable of grappling with it. The message was very well received and during the question period we had a discussion of the need to find new concepts of nonmaterial wealth of the kind one finds in community relationships – a topic that is close to the hearts of Rotarians everywhere. There were also intellectuals around; I was especially pleased when one of the Rotarians complained to me at the end, “You didn’t mention my favourite poet, William Blake.” I knew exactly where she was coming from, as I am a longtime fan of literary critic Northrop Frye’s writings and artist, poet and religious mystic William Blake (1757-1827) was a favourite of his too.

A central thread running through my activities in Kamloops was “sustainability” as later that day I went on to talk to an MBA class as well as an undergraduate HR conference on “Bridging the Generation Gap”. The ecological perspective proved especially useful in the latter session. The title of my topic was “Don’t Throw the Past Away” and I used the ecological perspective to highlight the way in which many countries in the West discard the elders in society so that that they play little or no role in nurturing the next generations. This dynamic is apparent in almost all the advertising one sees from the investment industry, which plays up retirement as a time of total self-indulgence and complete relaxation and implies that retired people have no useful role to play in society. No wonder they get discarded!

The Stages of Psychosocial Development

One of the benefits of being asked to address a new topic with the ecological framework is that one gets to read new materials and to integrate unfamiliar frameworks into the overall model. In the case of “Bridging the Generation Gap” I used Erik Erikson’s stages of psychosocial development as a key driving dynamic in the ecological process. The graphic looked like this: 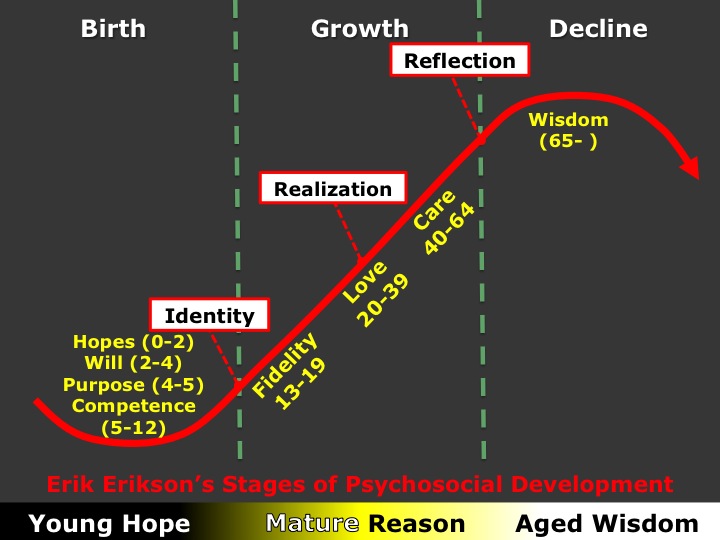 Erikson’s developmental stages fit very nicely into a lifecycle curve that underpins every system’s ecocycle. Here it plays the same role as a product or technology lifecycle does in a commercial concern. The stages fit naturally into three eras – “young hope”, “mature reason” and “aged wisdom”. During the first of these Erikson shows four stages between birth and the age of twelve when a tentative identity is laid down. During the next fifty years this identity becomes realized via another three stages that come to an end around the age of 65 to be replaced by a period of reflection when one looks back on one’s life. Each of the stages consists of an existential question and is characterized by a mini-crisis: 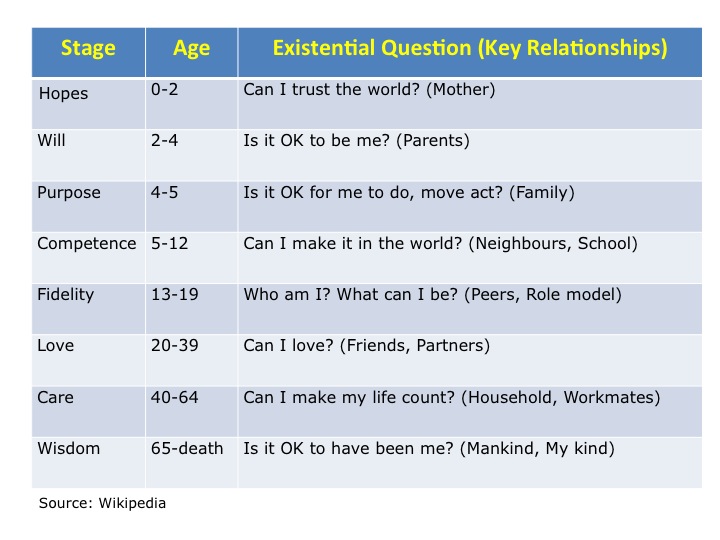 The Central Role of Narrative to Being a Good Ancestor

This life cycle then folds “up” into the overall ecocycle for society. Here I suggested that the key notion to the integration of all the stages of development was narrative. We tell stories about ourselves that create narrative centres of gravity that we call “identity”; families tell stories about themselves as do communities and societies. The stories that grandparents tell and read to their grandchildren are a continual affirmation of who they are as individuals, families and communities. When this process works effectively the result is a generative society that cares for future generations. Such a society creates meaning by integrating hopes for the future with wisdom from the past in a present that is full of significance for all who live in it.