← Exploring Leadership Using Metaphors Don’t Throw the Past Away → 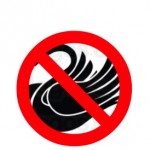 This past week I gave the opening keynote at the 2014 Conference Board meeting on Enterprise Risk Management. It gave me an opportunity to bring an ecological perspective to risk and uncertainty as well as allowing me to promote The New Ecology of Leadership, which was featured in the program. I really like these occasions when I am challenged to use the ecological mental model to understand a new area as I learn both about the new area as well as get to understand the mental model better. I also get to meet other people working in related fields. In this case I was particularly pleased to meet Guntram Werther, a professor of strategic management at The Fox School of Business at Temple University. He is a critic of Nassim Taleb’s “strong form” view of so-called “black swan” events, arguing that many such events are forecastable using holistic, “syncretic” thinking. This consists of “…proper situational awareness, insightful lessons from history, multiple perspectives, cognitive shifting, intuition and insight into multiplayer intentions, their implications and shifting contexts and other information-integrating logics.” I believe that an ecological mental model is one way of going about such thinking.

At the same time I repeated statistician George Box’s comment that “Models, of course, are never true, but fortunately it is only necessary that they be useful.”

Syncretic thinking, which is very similar to what IDEO call “T-shaped” thinking, aims for “both…and”, not “either/or”.  Werther quotes Jung who, like Kant, made a clear distinction between knowledge and understanding:

“I can only approach the task of understanding with a free and open mind, whereas knowledge of man, or insight into human character, presumes all sorts of knowledge about mankind in general … [leading to] the two diametrically opposed and mutually exclusive attitudes of knowledge, on the one hand, and understanding on the other. This conflict cannot be solved by either/or, but only by a kind of two-way thinking: doing one thing while not losing sight of the other.” (Jung, The Undiscovered Self, p.19)

This same duality between calculation and judgement is found in enterprise risk management.  I expressed it as a dynamic relationship – a dance – between a focus on algorithms on the one hand and pattern perception on the other: 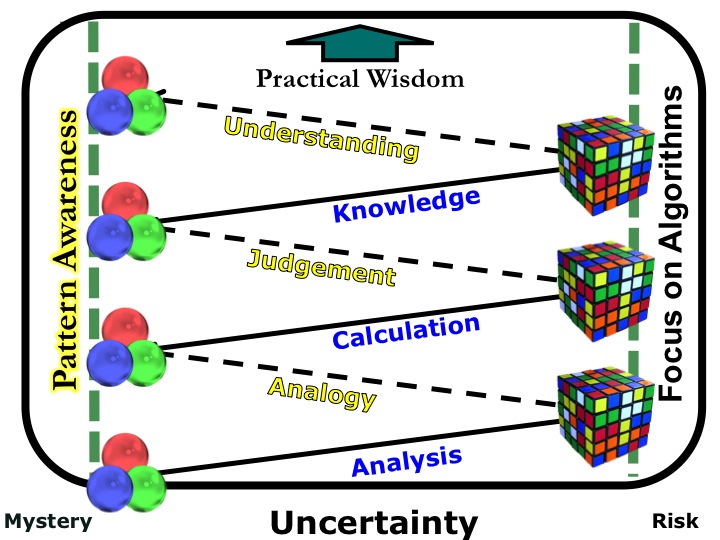 The Dynamic Relationship Between Patterns and Algorithms 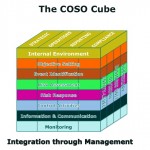 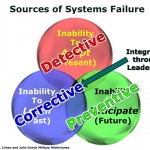 For the former pole of the tension I used the COSO risk cube, a rather structured way of looking at risk that I suggested was the equivalent of a large Rubik’s cube! The COSO approach emphasizes the role of management and calculation to deal with risk. For pattern perception I used the three sources of organization failure from Cohen and Gooch’s  entertaining book, Military Misfortunes. They identified these as three “inabilities”; to learn from the past, to adapt to the present and to anticipate the future. I represented them as three intersecting coloured spheres representing integration of risk by leadership and judgement.

Of course these images are not “right”; they are designed to be provocative and evocative to remind those who seek to understand risk and uncertainty that no single approach will do – every view is partial. The objective, as Guntram Werther suggests is to create a guiding thread, what Confucius called a “string”, to hold many facts together. In my view this is the primary role leadership and the medium of story – to act as a “a string in the labyrinth” of complexity and uncertainty.