← Management by Machine: MBO as Manipulation? The VW Debacle: How Large Successful Organizations and Institutions Can Become “Bad Barrels” And What To Do About It →

Don’t Throw the Past Away: Rediscovering the “Drucker Space” 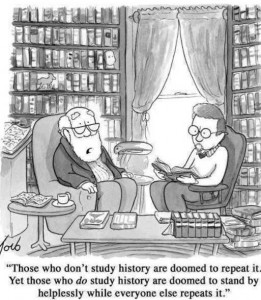 For Peter Drucker history was an essential resource. Commentators have described the scope of his writings as “Braudelian” in honor of the work of historian, Fernand Braudel, the leader of the French Annales school of history, renowned for its broad, integrative approach. Drucker’s illustrations of organization and change included both the British Raj in India and the Meiji Restoration in Japan. A trio of little-known German thinkers, Willem von Humboldt (1767-1835), Joseph von Radowitz (1797-1853) and Friedrich Julius Stahl (1802-1861) informed his understanding of what it took to preserve the traditions of the past while facilitating rapid change.

Ever since the reform of the American business schools in the late 1950s, however, the perceived importance of history to management has dwindled. It seems that innovation has replaced tradition and history itself is often viewed, at best, as nice rather than necessary. In his prescient book, Technopoly: The Surrender of Culture to Technology, cultural critic and media theorist Neil Postman identified the work of Frederick Taylor, the pioneer of scientific management, as embodying all the key assumptions of the modern age:

Postman suggests that these are the core tenets of an ahistorical totalitarian technocracy that he calls “Technopoly”.

Up until the 18th century, discovery, invention and technological change in the West took place within the grand narrative of the Bible, which acted as the moral center of gravity. It supplied the ends to which technology was the means. With the coming of the European Enlightenment and the emergence of science, the scriptures began to be replaced by a narrative of Progress. Instead of looking to the past as a guide we turned to the future as a goal. With progress often expressed in material terms, quality slowly morphed into quantity and the means to our progress started to become ends in themselves.

Today there is growing concern that we in the West are losing our sense of purpose and meaning at many different levels of society. With growth in real incomes restricted to a tiny fraction of the population, the consolation of increased material consumption is no longer available. In America, the home of Progress, people are starting to look back and talk about the “golden era” of economic growth in the 1950s and 1960s. As the American Dream fades, some are wondering what their children and grandchildren are going to do. They are searching for a new narrative, a new center of gravity that answers the existential questions: Who are we? Why do we matter? What’s our mission?

The answer can’t be “More!”

Back to the Future

Historian Daniel Boorstin’s favorite aphorism was “Trying to plan for the future without a sense for the past is like trying to plant cut flowers”. We need the past to understand the roots of our condition; where we have been and where we are now. Only then will we gain a glimmering of where we are going, where we ought to go and what we should do about it.

At the enterprise level history can help managers in at least three ways:

Currently, however, many organizations struggle to get into this space, especially those companies caught between the anvil of shareholder value and the hammer of digital technology. In late 2014, The New Republic (TNR), an American magazine concerned with politics and the arts, celebrated its centenary. Two years earlier it had been bought by one of the founders of Facebook, who had begun trying to transform it into a “digital media company”. The change was driven by technology and the publication’s history and mission received short shrift. At the TNR centenary dinner Leon Wieseltier, cultural editor for thirty-two years, articulated the challenge: “We are not only disruptors and incubators and accelerators. We are also stewards and guardians and trustees. The questions that we must ask ourselves, and that our historians and our children will ask of us, are these: How will what we create compare with what we inherited? Will we add to our tradition or will we subtract from it? Will we enrich it or will we deplete it?”

If Peter Drucker were alive today, I am sure that he would add “Amen” to that.

This blog appeared originally on the Drucker Forum website to publicize this year’s meeting with the theme: “Claiming Our Humanity – Managing in the Digital Age”