← Is Management Due for a Renaissance? A Theory and a Hammer: Managing With Incentives (Part II) →

A Theory and a Hammer: Managing with Incentives (Part I)

VAH Phoenix where the wait time scandal was uncovered

The wait time scandal, recently revealed in the Veterans Affairs Hospital (VAH) network in the U.S., is another indication of how difficult it can be to change large-scale, complex organizations. The VAH system has had a long roller-coaster history. It has been “turned around” often enough to make anyone’s head spin. These efforts appear to generate short-term improvements but the system seems inevitably to slide back into the swamp. The latest report is an interim one and it outlines preliminary findings without any attempt to understand the root causes – they will come later this year with the final report.

What we do know is that about a year ago senior people decided to focus on improving waiting times. These were to be measured by an Electronic Waiting List (EWL), which counted the number of days between the date when a veteran booked an appointment to the date the appointment took place. The target was that no veteran should have to wait more than 14 days and incentives were attached to meeting the dates. What could be simpler? You can’t manage what you can’t measure…

What ensued was measurement mayhem. Waiting time in hospitals is a classic, systemic problem – usually the result of a combination of complexity, lack of resources and broken work processes. People embedded deep in the system can rarely improve the situation through their own individual efforts. As a result, administrative officials found myriad ways to game the wait times. The most popular approach seems to have been to create a buffer paper list ahead of the EWL. This gave the veterans the impression that they were on a wait list but did not trigger the actual measurement of a wait time. Appointments could be transferred from the paper lists to the EWL as and when actual appointments became available. This could be done within the target of 14 days, often on the same day, showing zero wait time! The administrators collected their bonuses until the calm was interrupted by a whistleblower…

The Persistence of Managing With Incentives

We don’t know exactly what went wrong in the VAH but it is highly likely that, whatever it turns out to be, it will have been aggravated by the incentive plan. The problems associated with managing using incentives are legion, especially in the public sector. I blogged a few months ago about the dysfunctional results that ensued when test-based incentive schemes were introduced into the American education system. Yet their popularity seems to remain undimmed. Why is this the case? I suspect it is because of a self-reinforcing loop that rationalizes away any problems and allows its devotees to hold on to the basic principles. What are those principles and where do they come from? Next week I am going to suggest that they are the result of a rationalist approach to management. This week I want to look at what the self-reinforcing loop might look like: 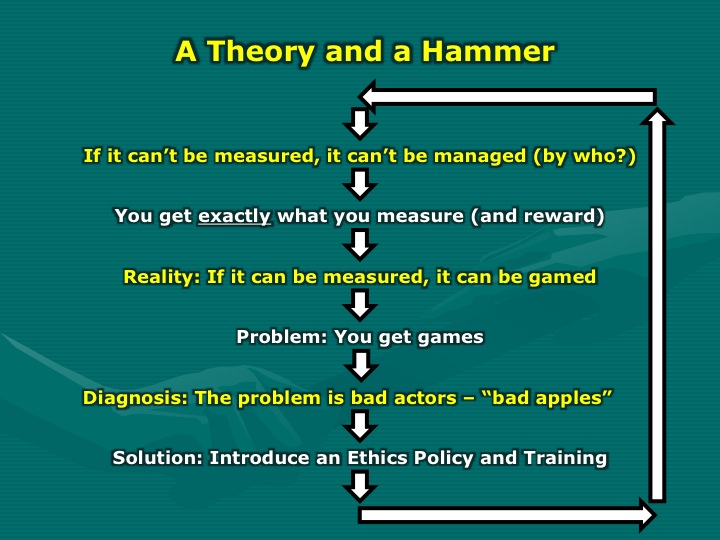 Here is an impression of how it might work: Managers invoke the mantra, “If you can’t measure it you can’t manage it”, starting the sequence. [Few people seems to ask who it is that is doing the measurement – Peter Drucker always argued for self-control which implies self-measurement]. They then add incentives to reinforce their message. In complex systems, with insufficient resources and broken processes, the measurements usually end up being gamed. Typically this problem is not seen as systemic. Instead it is diagnosed as the work of bad actors – “bad apples”. The authorities introduce an ethics policy, accompanied by training, and the incentive scheme continues…They also hire some new “heroes” who may produce some short term improvements, or at least the appearance of them, and the larger cycle of short-term recovery followed by long run decline repeats itself indefinitely…

This entry was posted in Change, Leadership, Strategy and tagged incentives, scandal, VAH, Veterans Affairs, wait time. Bookmark the permalink. ← Is Management Due for a Renaissance? A Theory and a Hammer: Managing With Incentives (Part II) →