← See-Feel-Smell-Change? Changing Behaviour Without Changing Minds Part II Is Storytelling a Strategy or a Competency? →

Addicted to Heroes: The Struggle to Improve America’s Schools

I have been reading Diane Ravitch’s 2010 book, The Death and Life of the Great American School System. She was an appointee to the Department of Education by both George H.W. Bush and Bill Clinton and initially a supporter of George W. Bush’s No Child Left Behind (NCLB) program. NCLB, which was begun in 2002, set the goal of having 100% of American children pass tests for proficiency in language and mathematics by 2014.  For this to happen, the number passing the tests would have to increase steadily every year. The watchwords of the program were “measurement”, “accountability” and “choice”. The philosophy came straight from the business world and the belief seems to have been that over the twelve-year period poor teachers and administrators would be replaced by good ones and the schools would become better with choice fueled by vouchers and private, charter schools available to replace poorly-performing public ones.

By 2009 Ravitch was thoroughly disillusioned with NCLB, arguing that it was a strategy without any vision for public education. It was framed in such a narrow, mechanical way that for teachers the program turned out to be a version of Jack Welch’s rank-and-yank system. Developed in GE, this system demanded that the top 20% of all performers were rewarded with bonuses, while the bottom 10% were fired. The implementation of such programs has had many unintended consequences in the private sector and many of these soon began to show up in the schools. Teachers started to “teach to the tests”, narrowing the curriculum and doing practice tests to improve their pupils test-taking ability. They began to ignore both the bright and slow students and to focus on the middle segment, members of which who could be most readily pushed across the proficiency line. As one might imagine, the teachers in the next grades receiving children who had been declared “proficient” in this way faced an uphill battle getting them through their classes. Cheating on the tests became widespread, with some cases of outright fraud taking place as answers were adjusted after the fact to boost scores. More generally NCLB reduced cooperation throughout the system and set teachers against each other. It turned out to be a great boon to the private consulting and testing industry; one wag quipped that NCLB really stood for “No Consultant Left Behind”.

Several years ago Jim Womack, founder of The Lean Institute and author of The Machine that Changed the World, wrote a blog called “Fewer Heroes, More Farmers”. In it he deplored the tendency for large corporations to rely on “heroic” leaders to galvanize their organizations. These leaders came in, turned around the business, were richly rewarded and then moved on. When the organization’s performance deteriorated the corporation set about searching for another hero….

Womack noticed three features of such businesses that were usually present:

Womack agreed that sometime heroes are necessary to sort out a desperate situation, but he argued that they wouldn’t be needed nearly as often if every important process in the business was tended by a “farmer”. The lean movement calls these farmers “value-stream manager”. “Farmers” plough straight furrows and tend the fences; they supply the discipline that every large-scale organization needs.

Unfortunately the repeated use of heroes in an organization creates a boom-bust cycle that demands yet more heroes and the system can become addicted to them. We can see this clearly in the American education system. Diane Ravitch mentions several of the heroes from the past: Alan Bersin in San Diego, Joel Klein in New York City and Michelle Rhee in the District of Columbia. In each case we see heroic actions, often conducted with great power but with little thought for continuity and the development of community. Instead of clearing the ground for the farmers to come in and plow the straight furrows, the heroes kept on going until they alienated enough of the community to be thrown out. This led to the search for another hero….

The ecological perspective captures the emergence of this situation nicely. It shows an educational ecosystem traversing the ecocycle through three contexts: community, market and factory: 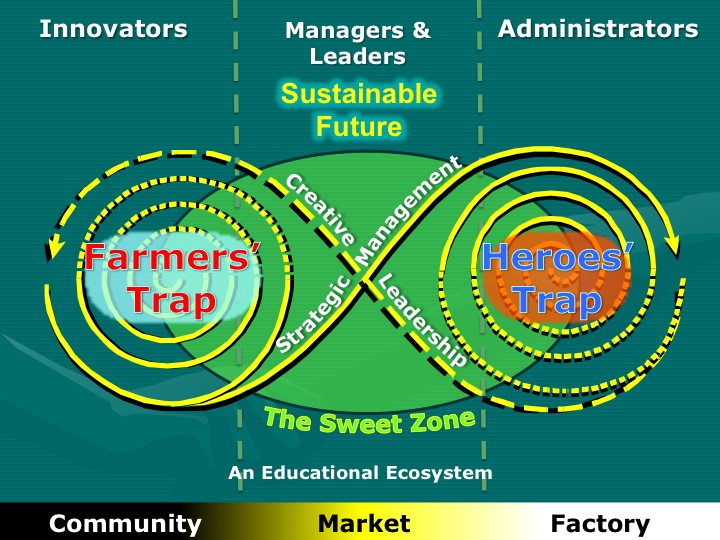 The Trajectory of an Educational Ecosystem

Typically schools begin their lives as community affairs and responsive to local needs. Often they grow as part of a religious community. As a nation grows and regional and national markets emerge, the schools became exposed to their demands, particularly the need to scale up and to handle many more pupils. Churches can no longer cope and governments have to get involved. In the 20th Century the American school system became an arm of industry: it was based on a factory model, using mass-production methods to produce “products” suitable for employment by industry and capable of consuming its output.

From an ecological perspective, for the system to be sustainable it has to be able to dwell in the sweet zone between twin traps. The Farmers’ Trap consists of methods and technology that are flexible and highly effective, but only on a small-scale. When one tries to scale up the system, one runs into quality problems.  The Heroes’ Trap, on the other hand, reflects the problems encountered when one tries to renew large-scale methodologies and technologies that tend toward rigidity. For renewal the institution needs to revisit the needs of the larger community, moving back to the left-hand side of the ecocycle to renew its sense of purpose. It can fall instead into the Heroes’ Trap, consisting of a succession of heroic attempts to implement new methods, but without ever revisiting the fundamental purposes of the activity. NCLB led the American education system into just such a trap and the system is still living with the consequences.

The bottom line is that the measurement and assessment of work for performance purposes can work well in simple systems, where results are all due to individual efforts and/or cause-and-effect relationships are well understood. As systems become more complex and results are due to collective effort, measurement and assessment are more important for learning and development than for reward and punishment. Schools are quintessential examples of complex systems, where cause-and-effect are not well understood and may vary from situation to situation. There is no “One size fits all”. In such situations the top-down application of rank-and-yank, carrot-and-stick policies driven by simple metrics may create nothing but unintended consequences.

One Response to Addicted to Heroes: The Struggle to Improve America’s Schools