← “Ethical Capitalism – Worth a Try?” – Confusion at Davos about What “It” Is Watch Your Language! Why Metaphors Matter in Management →

Skating To Where the Puck Is Going To Be: CVS Decides to Stop Selling Cigarettes

“Cigarettes have no place in an environment where healthcare is being delivered.” With these words, Larry Merlo, the CEO of CVS, the US second-largest drugstore chain, announced that they would be the first such chain to discontinue the sale of cigarettes. The decision appears to be an admirable one. It comes across as the highly unusual decision of a public company to forgo certain short-term profits in exchange for uncertain long-term benefits. CVS estimates that, together with ancillary products bought by smokers, it will lose about $2 Billion in annual revenue, costing it about 17 cents a share in earnings (CVS earns about $4.50 a share annually). So the downside is clear; what about the upside?

The upside has to be seen against the volatile, ever-changing face of American healthcare, with all its attendant uncertainties. One of the most helpful guides to this is Harvard Business School’s Clayton Christensen’s The Innovator’s Prescription, written with medical doctors Jerome Grossman and Jason Hwang. Their basic insight is that the one of the reasons that the American healthcare system is so expensive and inefficient is because it is being disrupted by three dynamics. The first is scientific and technological progress, which sees our understanding of diseases advance from that of symptoms to causes. Thus leukemia, which we used to think of as a single disease, is now seen as comprising over forty different kinds of blood cancers, each of which may require a different approach. The second is what they call business model innovation, often facilitated by digital technology. The third disruptive dynamic is in the value networks – the contexts in which firms launch their business models. The migration of TV sales from appliance stores to discount retailers would be a good example.

Hospitals have a very long history, which is woven together with that of religious institutions. The idea of the modern general hospital emerged in the 18th Century during the Enlightenment as the religious centres of care began to develop into places of cure. The first hospitals consisted of collections of generalists coping with all health problems. In those days almost all the health problems were unstructured as cause-and-effect were so poorly understood and mortality was high. As cause-and-effect relationships became better understood, specific cures and effective interventions started to emerge. Doctors began to specialize as the silos of knowledge got deeper and the organization of the modern hospital by discipline began to emerge. By the end of the Crimean War (1856) hospitals were starting to become known as place where one went to get better, rather than as places where one went to die.

Christensen et al. identify three kinds of business model; “solution shops” which diagnose and solve unstructured problems; value-added processes that take simple components and produce “healed” items; and facilitated networks that allow people in a community to exchange things with each other. Initially general hospitals were solution shops because the causes of almost every malady were a mystery. But over time, especially after the discovery of antibiotics during World War II, technological specialization and scientific progress allowed more focused treatments to evolve. And with them came a different business model – the value-added process. A case in point that Christensen et al. refer to is the Shouldice Clinic, Canada’s famous hernia hospital. It is a “focused factory”, a value-added process that does nothing but repair hernias, a job that it does more cheaply and more effectively than any general hospital. Other focused factories have emerged built round heart repair, orthopedic procedures, eye surgery and the diseases of the intestinal tract. The third kind of business model, the facilitated network allows the management of complex chronic diseases – Alcoholics Anonymous would be an early example – where members can find fellow sufferers and share their experience of what it takes to manage their condition and to control their addiction.

The accelerating disruption of the general hospital and the specialist physicians it employs is significant.  General hospitals, designed as solution shops, cannot manage value-added processes and facilitated networks effectively; it just stretches them in too many different ways and overwhelms their systems with variety. The result is massive inefficiency that cannot be tackled without separating the different business models. It is this process of business model emergence and separation that is now at work in the US; diagrammatically it looks something like this: 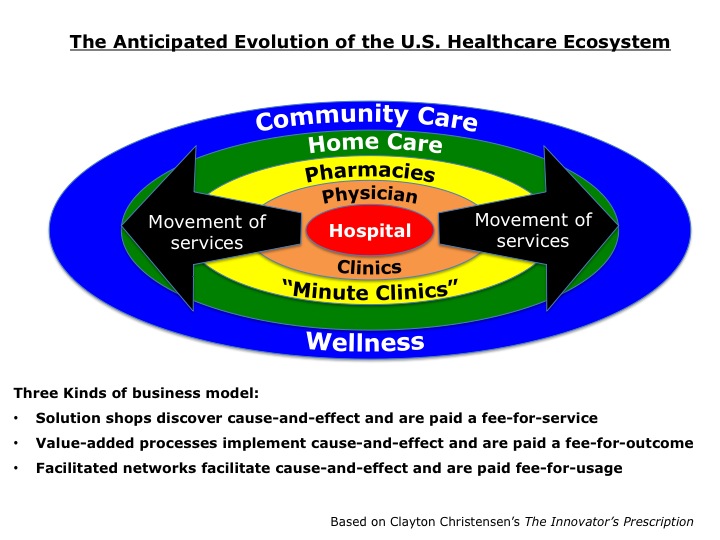 The Anticipated Evolution of the US Healthcare Ecosystem

The diagram shows the movement of health services out of the core general hospital as the cause-and-effect relationships that underpin diseases change from being mysteries to being well understood and their treatments become routine. The result will be what I would call a health “ecosystem”, with tiers of services.

The anticipated evolution of the US healthcare system seems to be following the principle of subsidiarity. Articulated most prominently by the Roman Catholic Church in the late 19th Century, it is a principle of decentralization that any matter should be handled by the smallest, lowest, least centralized competent authority. Thus today it makes less and less sense to have a general hospital do everything. Heart conditions that used to require surgery by superstar heart surgeons can now be dealt with on an outpatient basis. The skills of specialists are being commoditized as their intuitive knowledge is being replaced by precise diagnostics, mediated by technology. Even in the outer circles of the diagram, which capture the emerging concern for care in the home and the promotion of wellness rather than the treatment of sickness, technology is playing an increasing role.

So CVS seems set on positioning itself in the yellow band of the diagram just “downstream” from what they hope is a coming flood of business as procedures are moved from hospitals to physician clinics and from them to “one-stop” health shops, were you can get your minor ailments treated at “Minute Clinics” and your prescriptions filled. The CVS decision makes for great PR and no doubt they will milk it for all it is worth but a rationale like that proposed by Christensen and his colleagues likely supports their bold decision. Like ice hockey legend, Wayne Gretsky, they aren’t skating to where the puck is, but to where they think it is going to be.