← The “3Rs” of Management Part II: Rationality and Power Skating To Where the Puck Is Going To Be: CVS Decides to Stop Selling Cigarettes →

“Ethical Capitalism – Worth a Try?” – Confusion at Davos about What “It” Is 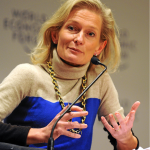 “Ethical Capitalism – Worth a Try?” was the rather timid title of one of the open forum sessions at the recently concluded World Economic Forum at Davos.  It was chaired by Zanny Minton Beddoes, the Economics editor for The Economist, and featured a panel of leading businesspeople as well as the social sector represented by Save the Children’s Jasmine Whitebread and Muhammad Yunus of Grameen Bank fame.

The panel began with Stan Bergman, Chairman of Henry Schein, declaring that he was “100% committed to the notion of free markets” as if they were articles of faith rather than useful tools, whose efficacy in practice is not always guaranteed. This point was made later by the economist on the panel, Ignazio Visco, Governor of the Bank of Italy. But it quickly became clear that most of the businessmen regarded capitalism as an economic machine that tended toward equilibrium and that any changes should be minimal and directed at making the machine work better.  Of course this assumption of equilibrium legitimizes the status quo and makes any criticisms of the system suspect.

Several of the participants made the point that, as an economic mechanism, capitalism is inherently free of ethics and that they have to be imposed from the outside. From that they concluded that there was nothing inherently wrong with or bad about the capitalist system; the problems were caused by bad or misguided individuals – investors who looked only to the short-term, unethical capitalists and interventionist governments. It was another version of the “bad apples, not a bad barrel” argument; get rid of the wrong doers, the system is fine.

The only participant who disagreed with this assessment was Muhammad Yunus, who argued that capitalism has an inadequate, impoverished view of human nature, emphasizing selfishness at the expense of our ability to be selfless and altruistic. He gave the example of payday lenders in America and the UK who are often the only source of funds for poor people and who charge interest rates of 1,000% or more. He went on to suggest that the high level of unemployment and that the state of the American healthcare are both examples of problems with the capitalist system. Clearly his comments struck a note with the audience and his remarks were the only ones to be applauded.

Capitalism as a Social-Ecological Process

What was missing from the discussion was any sense of history or even curiosity about where capitalism came from. Modern day capitalism has all the appearance of an economic machine, an appliance, but has it always been like that? It wasn’t designed by anyone; it just emerged and has been tinkered with ever since. And if it’s a machine/appliance, why don’t the “engineers” (economists?) understand it better? Why doesn’t “it” solve the problem of payday loan sharks and unemployment? There was mention of the old cliché about “teaching people how to fish” rather than giving them fish, but no discussion of what happens if the fish themselves disappear…

Once one starts to address such questions, the view of capitalism as an ecological process starts to commend itself. As I have written elsewhere, if we look at capitalism as an ecosystem, then it was likely conceived in passion, born in communities of trust, grew through the application of logic and matured in power. There is evidence for this in the origins of Anglo-Saxon capitalism in the passions and values of the Nonconformist communities of 17th Century, like the Quakers. These were communities of trust who by doing good did very well. The Quakers founded the iron and steel industries as well as (of all things) the chocolate industry (they saw chocolate as a healthy alternative to hard liquor). They became major bankers (Barclays, Lloyds) because they were trusted. They were also social reformers of schools, prisons, asylums and hospitals.

As they grew in size however, the logic of the businesses and markets that they had created began to take over. The Quakers found that they could not fund their businesses through partnerships (their favoured vehicle) and they had to change to joint-stock companies, which meant that their shareholders did not necessarily share their values. They also had to hire people for their technical skills not for their values. Gradually their Quaker values died out; they joined the Church of England and their business became giant public companies, organized in hierarchies of power. The word “capitalism” itself didn’t appear until the mid-19th Century…

So by now (from this ecological perspective) there is a risk that we have a large-scale decadent system, where value-extraction has taken over from wealth-creation. The problem is that an ecological process with profoundly ethical roots has become a mechanical structure that is ethics-free. Sociologist Max Weber suggested that there were two forms of rationality: wertrationale, a values-based rationality where things were done because they were intrinsically valuable and zweckrationale, an instrumental rationality, where things were done only because they had a tangible  (and measurable) payoff. Over the years zweckrationale has all but driven wertrationale from the concept of capitalism; means have become ends.

Evidence of this domination of zweckrationale appeared on the Davos panel with the suggestion by Martin Sorrell, CEO of the advertising business, WPP, that the problem of ethics could be tackled by the use of Key Performance Indicators (KPIs). CEOs of large companies seems to have a blind faith in KPIs that rivals their confidence in markets; to improve anything, they believe, all one has to do is measure it and apply incentives. Only Muhammad Yunus suggested that selfish goals can be measured easily but the selfless ones cannot; the same applies to quantity and quality. One could also point out that anything that can be measured can also be gamed and that a heavy KPI management environment promotes analysis over synthesis and encourages top-down command-and-control rather than command-and-collaborate.

So what is to be done? The Davos forum didn’t make much progress on that part of their topic. In the past the catalyst for the creation and renewal of Anglo-Saxon capitalism has been religion. Unfortunately, with the materialist views of the world now in the ascendant, we may have painted ourselves into a corner and closed off this avenue. What is needed is a new conception of human nature – which is certainly what Nonconformists like the Quakers brought to 17th Century England. The ingredients for this lie in new evidence from the cognitive sciences and new ways of interpreting that evidence; an ecological perspective can help. This will not happen automatically or easily; the current ideology of capitalism is self-sealing If capitalism were a natural ecosystem, it would need a crisis of some kind to renew itself – fire, wind, disease or pestilence. Let’s hope that it doesn’t come to that…

2 Responses to “Ethical Capitalism – Worth a Try?” – Confusion at Davos about What “It” Is