← Changing Our Models of Change: Nothing Lasts Unless It Is Incessantly Renewed” Cultivating Organizations – Background to The New Ecology of Leadership → 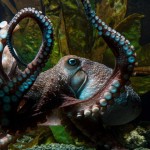 The story of Inky the octopus made headlines around the world this past week. In case you have been in Outer Mongolia (without the internet) Inky was a male common octopus on exhibit in New Zealand’s National Aquarium on the east coast of the North Island. One day his keepers noticed that he had disappeared. No one saw him go but they could follow his trail. He had squeezed through a small gap in the lid of his tank, slithered across the floor and disappeared down a narrow 50-metre long pipe that led to the sea. Inky was the size of a rugby ball but, like all octopi, he could get through holes the size of coins (the only limit is the size of an octopus’ beak, which can’t be shrunk).

As I was reading the story I was reminded of the ecological relationship between scale and opportunity. Inky was looking at his environment for tiny escape routes. As a result his world was full of potential to be explored. Larger scale creatures might not see these opportunities at all. We see this phenomenon everywhere in the history of innovation. While Xerox was developing its first commercial plain paper copier, the 914, it was desperately short of cash and other resources. It explored licensing the technology to IBM, who turned to Arthur D. Little, the well-known technology consultants, to get their opinion. Little surveyed potential owners of the machine. It was complex to use, could produce one copy every 26 seconds and had a tendency to set the paper alight. Every machine came with a built-in “scorch eliminator” (fire extinguisher). There is no doubt, however that everyone was put off by its size. The 914 was a large cube, roughly four feet square, and weighed an astonishing 650 pounds! It needed a separate room to house it. After a year of study the technologists dismissed the machine as being far too cumbersome and expensive. They concluded that there would never be a market for more than a few thousand of them. IBM rejected Xerox’ overtures and the rest is history. The 914 went on to be a colossal success and Xerox eventually placed (the machine was leased on a per copy charge) more than 600,000 of them.

In contrast, entrepreneurs who look at the world with fine-grained vision see opportunities that their coarse-grained competitors will not. Sam Walton, the founder of Wal-mart is a case in point. The story of Wal-Mart’s growth from a chain of small, rural discount stores to its current position as America’s largest employer is the stuff of business legend. Numerous reasons have been given for its success, ranging from the entrepreneurial genius of Sam Walton and the logistical skills that the company has developed, to predatory pricing and the abuse of the labor laws. One of the reasons that one rarely sees advanced is that of scale.

In the late 1950s Sam Walton owned a Ben Franklin variety-store franchise. Here he perfected a method of making profits from small-scale retail outlets. When he went out on his own in the 1960s, his first store was only 16,000 square feet in size; subsequent stores were even smaller – at 12,000 square feet. This small-scale model allowed him to put stores all over Arkansas in spots that presented little competition. Ecologically it was the equivalent of putting “weeds” into open patches. This was the time when the development of the suburban mall was well under way, and many of the established retailers, like Sears Roebuck were pursuing a strategy of building economies of scale. Sears at this time could probably not have made a decent return from stores much under 50,000 square feet in size. Suitable locations for them were increasingly hard to find and ringed with competitors. Because of the small scale of its stores and the consequent absence of competition, Wal-Mart grew prodigiously.

A further advantage of Wal-Mart’s small scale and rural beginnings was that Walton had to develop his own distribution system because traditional wholesalers refused to make small drops on remote country routes. This was the genesis of the company’s famed logistics system, which gradually evolved as the constraints to efficient shipping were steadily overcome by novel solutions and the latest technology. Wal-Mart had a network of twenty-four stores in Arkansas before it moved into the neighboring states, pursuing a rural strategy and initially avoiding competition in large urban centers. 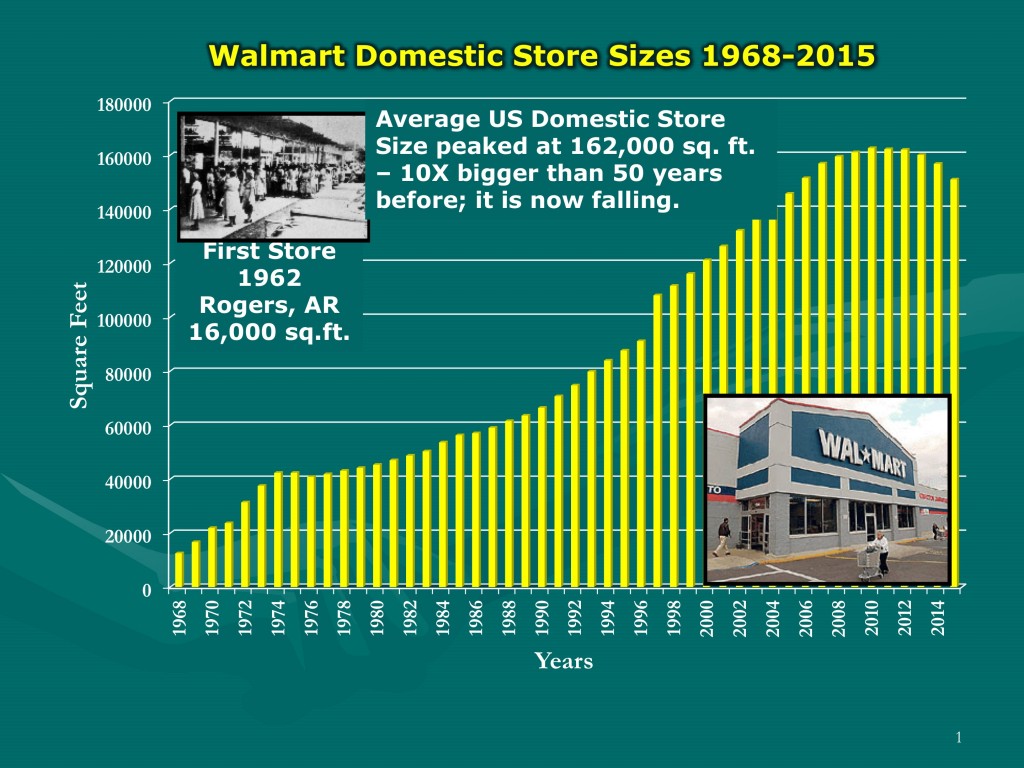 As the diagram shows, in the 50+ years since its founding the size of Wal-mart’s stores has increased hugely, although recently it has started to decline. The giant superstores (average size 186,000 square feet) are falling out of favour as shoppers turn to the internet. Wal-mart has experimented with smaller scale formats – 40,000 sq. ft. “neighbourhood markets” and, since 2011, with 15,000 sq. ft. “express” stores. Management said that the latter format would allow it to play “urban offense and rural defense”. This turned out not to be the case and in 2016 the company announced the closure of all 102 Express stores. There was a hint that their famed logistics system could no longer handle profitably the really small stores on which they had built their fortune so many decades earlier.

All the same, it’s a credit to Wal-mart management’s curiosity that they are still thinking small and haven’t yet let their great success constrain their search for opportunity. That was another thing Inky’s keepers at the New Zealand National Aquarium said about their octopus. Even though octopi generally are active and engage with their environments, Inky had an especially curious nature. In the current management jargon the ability to pay close attention to one’s environment is one of the features of being “mindful”. So here’s a recipe for innovation: stay curious, think small and be like Inky, the Mindful Mollusk! Oh, and at the same time create the context for everyone else in the organization to do the same.