← Learning: The Power of Simulations The Nature of Uncertainty: Hunting Black Swans →

Last week I spent a day-and-a-half with a group of senior managers from a large global company discussing leadership. The company faces all the challenges one might expect it to face – globalization, digitization, cross-cultural difficulties and so on in a VUCA world i.e. one that is Volatile, Uncertain, Complex and Ambiguous. 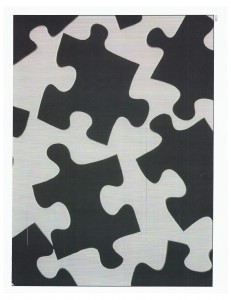 A Puzzle Without a Picture

Our topic was leadership and our medium was metaphor. A few weeks ago I blogged about the role and power of metaphors in management and the original meaning of the word – from the Greek meta (beyond) and pherein (carry). Our detailed sub-topics were “setting direction”, “building alignment” and “creating commitment” and we began by outlining the challenges the company faces using the well-known instrument Visual Explorer, developed by David Horth and Chuck Palus at the Center for Creative Leadership (CCL). It consists of hundreds of images from which participants are typically asked to select one that connects with their challenge.  They then discuss their images in their teams and present their thinking to the group as a whole. The image on the left represents a typical choice; the company’s challenge is like putting together a complex puzzle without the picture on the box to guide the people. An excellent discussion then ensued about who had the picture or whether the puzzle that is the future comes in a box with a picture at all!

Exploring Metaphors in an Ecological Framework

The second of our three half-day sessions began with a presentation of an ecological perspective from The New Ecology of Leadership for framing the discussions about where the company is headed and we then moved to the Leadership Metaphor Explorer (LME). This new instrument by the Horth and Palus team consists of 83 cards with images and phrases, each of which describes a particular leadership culture. Each of the five teams of six people had their own pack of cards and every individual was asked to pick two cards – one that reflected the current leadership culture and another that showed how it would have to change to help the organization grapple with its challenges. They discussed their choices round their tables and then presented their discussions to the group as a whole. I should add that, in order to stimulate uninhibited conversation, I brought an ample supply of my own, patented “Get Out of Jail Free” cards that promised the holder immunity from “prosecution” or any damage to their career that might ensue if they said something to offend the corporation, annoy senior executives etc. etc. As always these were a huge hit, with some managers decorating their bodies with them in the same way one might use cloves of garlic for protection against vampires! 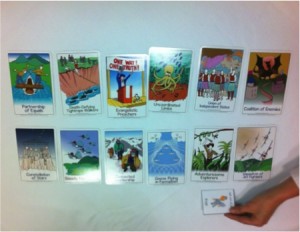 The conversations catalyzed by the LME went extremely well. There were animated discussions around each table of six, at the end of which they lined up their “before” and “after” cards in two long rows.  This allowed each team to compare and contrast their views of the current situation, which they illustrated with real examples from corporate life. Some talked about their own managers as exemplars of the different leadership cultures and how important it was to understand the differences among them. They also talked about their views of the future and what would have to be done or undone to cope with the challenges.

By the time each team got to present their discussions to the plenary group they had begun to create complex narratives about where they had been, where they are now and where they must go. The five flipcharts were set up in a roughly pentagonal shape and the group of thirty managers strolled around and stood to watch the presentations on the charts. There is something extraordinarily powerful about the dynamics of this process and the addition of the LME cards and their phrases makes all the difference to what might otherwise be boring text-only presentations. The images engage the right sides of the brains of those present, keep their creative juices flowing and the conversations light, which allows one to tackle the most difficult of topics.

For example one of the touchiest topics raised was that of budgets and the firm’s performance management system. Like many large organizations the corporation does not separate the financial forecasting function of budgets from performance management. In The New Ecology of Leadership I suggested that the decoupling of these two functions may be the most important action any management team can take. Yet, despite general acknowledgement that most corporate budgeting systems are broken, there has been precious little progress made in this key area. In any event we had an excellent discussion about the tough issues associated with changing the situation and the team of managers left with renewed commitment to doing what they could to address the issue.

I came away from the three sessions very pleased with the Leadership Metaphor Explorer and how well it made a bridge from the Visual Explorer up front to the very sensitive, difficult issues that the senior managers needed to get a handle on. I think that the participants also found the ecological framework to be a helpful mental model for making sense of the dynamics at multiple levels in the organization; within the organizations itself,  in the products and services that make up its “components” and in the larger context in which it operates. I think that the feedback will confirm that it was a day-and-a-half well spent.