← The Engineer and The Gardener: the Central Tension in 21st Century Management Lead Like A Gardener: The Movie →

BREXIT: A Study in Complexity

British politics is in a real mess. Mired in the Brexit debate, its current predicament is best captured in the poetry of the Victorian writer Matthew Arnold; “Wandering between two worlds, the one dead, the other powerless to be born.” The British public, Remainers and Leavers alike, seems to be thoroughly sick of the whole topic and just want it to end. But it won’t. The UK and its parliament are caught in a social/systems trap.

This predicament can be visualized using the ecocycle, which is an ecological/complexity perspective on how complex adaptive systems function: 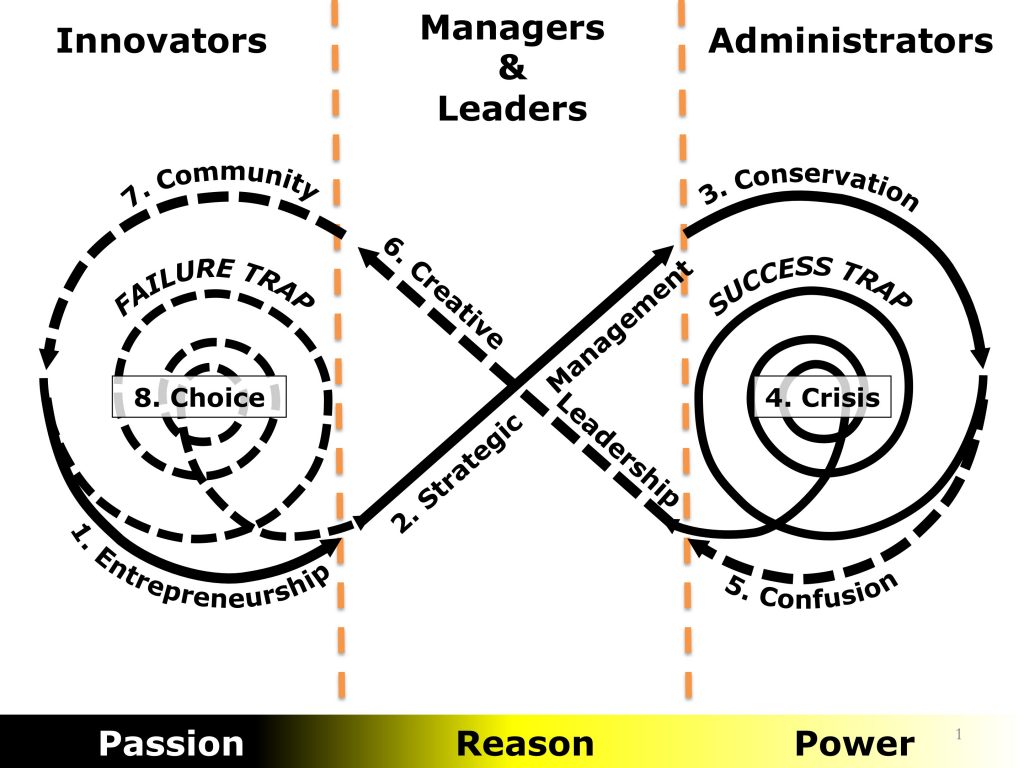 Enterprises, economic, social and political, are conceived in passion, born in communities of trust, grow through the application of reason and mature in power. As successful systems mature, however, they become over-invested in the structures and processes that perpetuate their success and suppress any disruptive threats. They get stuck in a success or power trap, which sets them up for crisis and destruction but with the possibility of renewal. This is where the Brexit process is at the moment, spinning in a spiral of crisis and confusion (between stages 4 and 5 in the diagram). Both Theresa May and Jeremy Corbyn are trying to preserve the current power structure by getting back to stage 3 (Conservation) but Brexit has altered the political landscape and their efforts to do so are just keeping the system in the trap. The country needs to go forward but no one knows how.

The Tragedy of the (House of) Commons

One of the best-known social/systems traps is Garrett Hardin’s tragedy of the commons. In a 1968 Science article of the same name he tells the story of villagers who grazed their cattle on a shared pasture. It was profitable for each individual villager to add an extra cow but eventually over-grazing destroys the pasture. The trap is that each individual pursues his or her short-term personal advantage but jeopardizes the group’s survival as a whole.

We find the same kind of social/systems trap in organizations, where it is known as a success or power trap. The organization and the individuals that comprise it are unable to abandon the habits and heuristics (rules of thumb) that have made them successful and have become embedded in the power structure.  The trap works like an addiction – the short-term rewards are clear and tangible, while the long run consequences of anything are unclear and vigorously disputed.  An additional problem is that there is no data about the future; any predictions are extrapolations from the past. As a result humans default to an ancient way of making decisions in uncertain situations – they tell stories to each other and the ones with the most compelling stories usually carry the day.

Humans live in a constant tension between issues of identity and utility, a tension that includes the pull between our social and individual natures. Identity deals with collective questions like “Who are we?” and “Why do we matter?” Utility in its rational actor version is concerned with individual questions like “What do I want?” and “How do I get it? In the case of Brexit you can see the contrast between the two when you look at the arguments between the Leavers and the Remainers. Leavers talk about issues of identity – ‘sovereignty’ and ‘control’ – they wear the Union Jack and promote a narrative of ‘Global Britain’. Remainers, on the other hand, raise utilitarian economic issues and talk about the financial damage that Brexit will do to the UK economy. As a result both factions talk past each other. But when push comes to shove stories of identity trump the logics of utility. People whose narratives are threatened will vote against their own self-interest to get their story back. The most vociferous supporters of Brexit live in the old coal-mining and heavy industrial areas that have been most damaged by Britain’s shift from an industrial to an information economy. In interviews they seem immune to arguments of economic harm. Their vote for Brexit comes across as a desperate plea for change. Their mantra is “Anything would be better than this.”

The original sin in the Brexit matter is David Cameron’s. Large-scale human systems are technically complex, requiring functional specialization, and for stability they must be hierarchical. Ideally these hierarchies are not pyramids of command and control, where the lower levels are told what to do, but multiple layers of constraint with the large, slow systems creating boundaries within which the smaller, faster systems must stay. If a small, fast system escapes these constraints disruptive change may follow. In politics modern representative democracy is one such hierarchy of constraints. There is functional specialization in the civil service and members of parliament are not delegates but representatives required to use their own informed judgment on complex issues. Unfortunately David Cameron’s referendum was a misguided experiment in direct democracy that allowed factional passions in the UK to escape these constraints.

Cameron let the genie out of the bottle but for a very poor purpose. There was no national need to call a referendum.  It was not a matter of pressing urgency to the voters. But Cameron had an internal party problem and feared that Tory right-wingers might defect to Nigel Farage and the United Kingdom Independence Party (UKIP). Thus the referendum was not a matter of conviction but one of convenience, a way of keeping the party together. Just as lawyers in court never ask questions to which they don’t already know the answers, one suspects that Cameron thought he would win the referendum easily. Over-confident, the Remainers ran a lack-luster campaign focused on the negative, economic consequences of leaving, while the Leavers told a powerful national narrative of a sovereign, independent Britain forging its own destiny and with control over immigration, the core issue for many supporters of Leave. (For some more thoughts on the power of narrative in the European context see my blog of November 12, 2013.)

In short, Brexit, from the very beginning, has been all about the maintenance of the present political power structure while trying to manage disruptive change. Theresa May is still trying to find a way of keeping her party together while “delivering Brexit” and Jeremy Corbyn wants Brexit to happen without his fingerprints on the deal. For the Brexit issue cuts right across the intensely tribal divisions that are such a feature of British politics. As such it represents perhaps the most powerful threat to the structure of the main parties since the repeal of the Corn Laws in the mid-19thCentury. Both Theresa May and Jeremy Corbyn are losing control of their parties. Their leadership is being questioned and splits are emerging. Last week eight Labour members left to form The Independent Group (TIG) and three Conservatives joined them.  Nigel Farage has formed a new Brexit political party to which he hopes to attract right-wing conservatives. With the official deadline for Brexit , March 29, fast approaching there is the threat of more defections and the likelihood that parliament as a whole will start to take control of the process. Once that happens the old, frozen power structure will become much more fluid, a pre-condition for the conception and birth of the new. The very recent announcement that Labour will support a vote for a second referendum and signs of movement in Theresa May positions suggests that parliament is moving to open up its options again.

A typical formation sequence of a political fission goes like this: individuals separate from large parties to form groupings, small groupings develop tendencies, tendencies become factions, factions become movements and movements become political parties. The essential catalyst for this formation process is creative leadership. This is leadership that gathers together the shards of the old power structures and brings them back into a new community. The vehicle for this is a compelling vision, a powerful new narrative that addresses the existential questions, “Who are we?” “Why do we matter?” What’s our mission?” Only a new community with a powerful narrative can create the choices and the collective power for the new world to be born. Now all Britain needs is the creative leadership that can help it happen. This week of March 11, 2019 should see whether it is forthcoming.