← Heading for London, Vilnius and Vienna You Can’t Herd Cats, But They Will Hunt Together →

European Union: If You Have Them By Their Wallets, Will Their Hearts and Minds Follow? 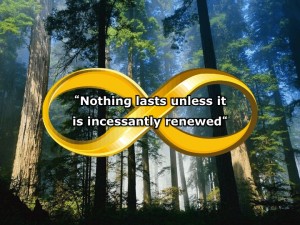 Last Thursday I was the opening speaker at the International Forum for Future Europe held November 7- 8 in Vilnius, Lithuania. The theme of the conference was Sustainable Development and Harmonious Society and the title of my talk was “European Renewal and the Ecology of Sustainability”. I had been given 20-30 minutes, which is the shortest time I have ever had to get across an ecological perspective, especially when dealing with such a large complex system as the European Union. I decided to express the central message in terms of three memorable artifacts (see picture):

The presentation was very well received by the approximately 300 attendees in the Lithuanian Parliament buildings and kicked off two days of presentations and discussions on a wide variety of sub-topics related to the overall theme.

European Integration and its Challenges 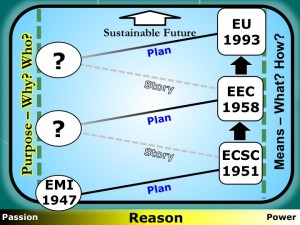 The European Union in the Sweet Zone (just – see commentary)

One particular slide of mine that attracted some comment was of the position of the European Union in the “sweet zone” of the ecocycle. It showed the community being founded in the immediate aftermath of World War II in the form of a series of “movements” that dealt with the challenge of bringing Europe back together so that the tragedy of what philosopher Stephen Toulmin calls the “Second European Thirty Year War” (1914-1945) would not repeat itself. These movements included the Anglo-French United European Movement, which eventually became the European Movement International and culminated in the creation of the Council of Europe. The Council became an umbrella for the setting up of the think tanks and discussion groups that continues to this day and of which the Vilnius conference was just the most recent example.

These movements were quickly superseded, however, by integrative structures. The best known of these early integrative organizations was the European Coal and Steel Community, which was set up by the Treaty of Paris in 1951 and designed to make any future war between France and Germany “unthinkable”. Since then the means of European integration – the “what” and the “how” – have predominated over the ends, the purposes of integration – the “who” and the “why” – and my slide shows the European enterprise trying to run up the right-hand side of the sweet zone, flirting with the power trap. It has produced lots of plans and a powerful bureaucracy but without revisiting its purposes and sponsoring the creation of powerful narratives to which the citizens of Europe can subscribe. The unspoken philosophy behind this process seems to have been an economic one – “If you have them by their wallets, then their hearts and minds will follow.”

An ecological perspective suggests that this “buy-in” (like all “buy-ins”) will be temporary at best and that even the resulting tepid commitment will fluctuate with the EU’s economic fortunes. In good times people might be mildly in favour of the European enterprise but in tough times they will tend to default to their national narratives and national identities. This is indeed what we see with the rise of euroskepticism, which as Nigel Farage, the leader of Britain’s United Kingdom Independence Party (UKIP) proclaims is all about national identity.  What is needed, I suggested to the Vilnius conference, is a narrative for the whole of Europe that, over time, will create a European identity.

Although I had no time to go into the matter in my presentation, the challenge for Europe is to create a shared narrative that weaves together the national narratives into a coherent powerful story that can evoke the commitment of many to the European project. This is not a job that can just be handed over to the writers and wordsmiths. Such stories may read well but they rarely have any traction. The challenge was well stated by the late historian Tony Judt in his paradoxical thesis that Europe has been able to rebuild itself politically and economically only by forgetting the past, but that it can define itself morally and culturally only by remembering it. The horrors of the Second Thirty Year War (1914-1945) are disappearing fast from living memory. Next year is the centenary of the outbreak of World War I and those with first-hand experience of the Second World War are dying off. The new generations have no memory of what it was like. Further progress in European integration will require them to revisit the past but asking new questions and being open to new interpretations. Obviously I champion an ecological perspective as being one way to go at the challenge.

At the same time the EU will have to sponsor the creation of shared experiences for the youth of Europe, so that they can build their own narratives and create their own visions of the future. For effective visions are the product of powerful narratives – outputs from them, not inputs to them. Without a coherent narrative that learns from the past and helps one understand the present, no compelling vision of the future is possible. But this is the European Challenge for the next few decades.

One Response to European Union: If You Have Them By Their Wallets, Will Their Hearts and Minds Follow?