← The Spring Campaign Learning: The Power of Simulations → 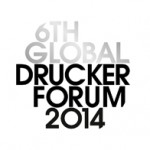 The theme for the 6th Global Peter Drucker Forum to be held in Vienna November 13-14 is “The Great Transformation – Managing Our Way to Prosperity”. The launch event took place in that city last week. Over 120 people gathered there to discuss the theme and some of the sub-topics that are likely to be raised at the meeting.

The inspiration for the meeting’s theme comes from a general feeling of malaise in the West. Since the Great Recession of ’08 there has been a weak cyclical recovery that has not yet seen the major economies reach their pre-crash levels. Unemployment and debt levels remain high, social security systems are underfunded and many of the structural problems that precipitated the crash remain unaddressed. A host of longer-term issues remain untouched. In the past technological advances have bailed us out of these kinds of situations, creating growth and jobs. This time there is concern about how much growth the new digital technologies will create and a real worry that they will destroy rather than create jobs. At the same time there are concerns about the ability of politicians to sort out the mess and most mainstream economists seem powerless to help them think through the issues.

It seems likely that we are facing multiple wicked problems, where there are no definitive formulations and no right-or-wrong solutions, but every attempt counts! In such circumstances how we describe our social, political and economic challenges influences the solutions we try, so getting a variety of viewpoints might be the most important role played by this year’s Forum.

For an expansive, provocative view of what’s happening, economically and technologically – the context in which management is operating – I have found neo-Schumpeterian economist Carlota Perez’ writing most helpful. Her views seem to mesh with an ecological/systems perspective of how the world works and make more sense to me than the equilibrium-based perspectives of neoclassical economists. 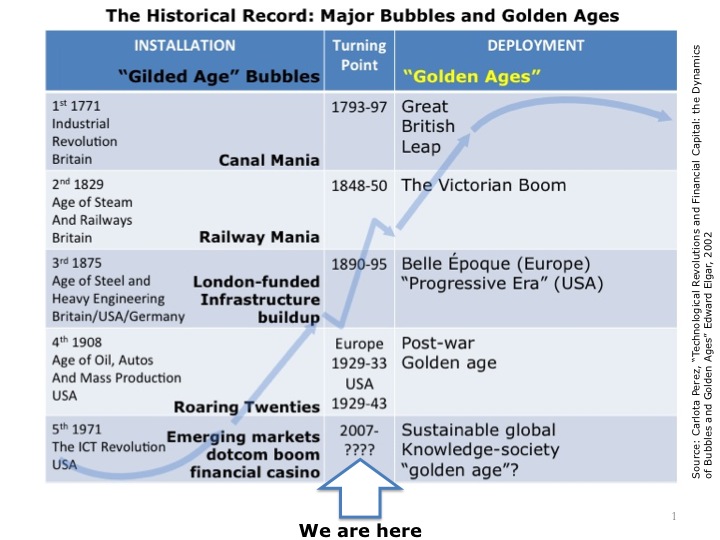 As shown in the diagram, she has identified five technological revolutions over the past three centuries. The features that they have in common are that they did not just lead to new products and industries but transformed entire economies by creating a new “techno-economic paradigm” or “common sense best practice”. According to Perez, these S-shaped technological surges go through two stages, each lasting 20-30 years. The first phase, called the Installation Period sees the setting up of the new infrastructure as the markets pick winners; it is toward the end of this stage that financial bubbles often occur. The second phase is called the Deployment Period. This is usually considered to be the “golden age” when the full benefits of the revolution are felt and the benefits are broadly spread. In between the two stages there is a “Turning Point”, a variable period of recession as the excesses of the first phase are curbed and the institutional ground is prepared for the second.

A key distinction in Perez’ framework is between financial capital and productive capital. These are not different kinds of capital so much as they reflect different functions of capital. The motives of the wielders of financial capital are to keep their assets liquid or semi-liquid and make money from money; their economic function is to redistribute wealth. The deployers of productive capital, on the other hand, are motivated to create wealth by the provision of goods and services. To do this they may borrow financial capital but their motive is to create greater profit-making capacity. Thus the distinction is between the enablers of wealth creation and the actual creators of wealth, between the financial economy and the real economy.

Where We Are Now

Perez suggests that the Western world is currently in the inflection point between the installation and deployment phases of the information and communication technology revolution. She draws analogies of the period we have been through to the canal and railway manias of earlier eras as well as the Roaring Twenties. These are “gilded ages” when financial capital takes over the economy and often creates speculative bubbles of the kinds we have experienced. She points put that the subprime speculative frenzy was largely enabled by the ICT revolution and would not have been possible on nearly such a large scale without it.

What is needed now according to Perez, once the finance economy has been stabilized, is the redesign and regulation of the national and global financial architecture to enable a structural shift in the real economy. She points out that this is going to be the object of an intense power struggle: “The last time around (after the crash of 1929) it took more than a decade and a world war to establish the Bretton Woods agreements and the welfare state, which were the appropriate framework for the deployment of the mass production revolution.”

Is Perez’ framework “right”? Of course not. However, as the statistician, George Box, pointed out, all models are wrong, but some are useful. Perez’ model is useful; it seems to point us in the right direction and address the issues we should be considering. Along the way it will suggest some good questions we should be asking. The fact is that in times like these we need good narratives to build consensus on action and focus our efforts. Remember that with wicked problems all attempts at solution count. Just as is the case with organizations, an indifferent plan coherently implemented is likely to be more effective than a good plan poorly implemented. This is because a community that shares a common, compelling narrative is far better equipped to learn from their experiences than one that doesn’t. The learning mantra with complex systems is “probe-sense-respond” and coordinated action of any kind that creates a learning situation is preferable to inaction that doesn’t.

In the West we are a long way from developing a shared narrative on what is happening in our societies and what we should be doing about it. As Peter Drucker would have said, it’s going to demand some hard thinking about the complex process that is capitalism. More importantly, it is going to require some very different thinking and this is where the Global Drucker Forum can perform its function as a catalyst for change. Sounds like a good conference to be at in November!