← Ecology versus Engineering: Why Reverse-Engineered Strategy Is No Better Than A Paint-by-Numbers Kit Harvard Business School: The Reality Show? →

Syria – complexity, dilemmas and a quest for leadership 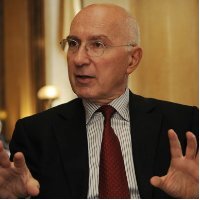 Richard Straub, President of the Drucker Society of Europe

The theme of the Drucker Forum to be held in Vienna November 14-15 is “Managing Complexity” and Richard Straub, the President of the Peter Drucker Society Europe has been posing various provocative questions to publicize it. Recently he posed a question on Syria as a complex problem: “What should political leaders do? There is no simple answer to a situation of high complexity and unpredictability. We need politicians who are better than that. Any ideas?”

My reply had to be shortened because of the space limitations on LinkedIn. Here is the full response:

One thing we know from the US involvement in Iraq and Afghanistan (and even in Vietnam) is that we don’t want any more attempts at engineering solutions to complex , “wicked” problems. Basically an engineering approach examines the current situation, envisions a desirable future and then identifies “excellent” organizations that have already reached this enviable condition. The organizational engineers then “reverse-engineer” these excellent organizations and identify the “key success factors” that led to their success. These are then condensed into “principles” that must be “implemented”.  This approach is widely used in corporations, where its effectiveness is highly debatable but it has also been a longtime feature of American foreign policy. The result is storefront democracy, a nominal veneer applied to politics that can neither conceal not contain the raw power dynamics that rule behind the scenes.

An engineering approach to democracy makes for dramatic announcements and high-flown rhetoric. Thus at the outset of the Iraq War George W. Bush expressed the hope that Iraq would become a federal democracy and a beacon to all the totalitarian states in the Middle East. The Americans then set about implementing all the formal trappings of democracy. Democracies have constitutions, therefore Iraq must have a constitution; democracies have institutions, therefore Iraq must have institutions; democracies have elections, therefore so must Iraq, and so on. But this mechanical approach does not work in complex systems. You can create facsimiles of the institutional forms through fiat but you cannot reproduce the causal dynamics, the ecological processes that underpin and sustain them and are the prerequisite for any viable democratic system.

The Preconditions for Democracy

Democracy depends upon the presence in a nation of a civil society, where people are prepared to cooperate with others in communities of trust and practice on all matters, even when their colleagues are not their kin. One of the major catalysts for this kind of cooperation has been religion, especially religions that have been “reformed”, so that church and state are separated. As is well-known, none of these preconditions exist in the Middle East. The colonial powers formed these states without regard to ethnic groupings and they consist of a polyglot of families, clans, sects, tribes and other groupings with long histories of conflict with each other. The problems with the training of the Afghan army are well-known. Some of them are due to illiteracy etc. but the real problem is that there are few, if any, “Afghanis”. Those being trained have powerful allegiances to families, clans and tribes but feel none to the Afghan state. In addition, Islam is an unreformed religion that has never gone through the necessary separation of temporal and religious power. Indeed some doubt whether it ever can go through this process and survive.

Three Conclusions From An Ecological Perspective

So what is to be done? Is this the counsel of despair? Not at all. But political leaders should realize that from an ecological perspective there are no short cuts to democracy. The developmental processes can be accelerated, but they cannot be skipped. In England, the Mother of Parliamentary Democracy, it took over six centuries from the Magna Carta to the extension of the franchise to women for an example of modern democracy to emerge. Countries like America could see further and go faster but they stood on the shoulders of those who had gone before them and learned from their mistakes.

A second conclusion from this approach is that every nation will have a different path to democracy; one size does not fit all and the practice of democracy permits many variations. There are some common themes; for example the equal treatment of females and the education of girls and women seems to be a powerful catalyst for political and economic development. But each nation starts from a different place and will have to find its own way to implementing such strategies.

The third conclusion from an ecological perspective is that democracy is a journey, not a destination. The countries of the world span a spectrum of political states from authoritarian to democratic. Even in the most politically advanced countries democracy is a work in process and a very long way from perfection.

It is the failure of engineered, storefront democracies that explains America’s historical preference for the realpolitik support of strongmen and their ability to provide stability in troubled societies. Humankind’s history is a testament to the fact that stability is preferable to chaos, no matter who provides it and often no matter how suspect the dictator’s values.

An ecological perspective on complex systems recognizes the critical function of communities of trust and practice and the pervasive role that power plays in every organization. Perhaps such an approach to handling wicked problems instead of an engineering one will lead to a better alignment between practice and rhetoric.

This entry was posted in Uncategorized. Bookmark the permalink. ← Ecology versus Engineering: Why Reverse-Engineered Strategy Is No Better Than A Paint-by-Numbers Kit Harvard Business School: The Reality Show? →

One Response to Syria – complexity, dilemmas and a quest for leadership