← Blog On Summer Break, Then Occasional Rather Than Weekly What They Should Be Teaching at Business Schools →

Strategy as the Creation of Power: The Lion versus the Fox 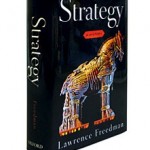 Strategy – a History by Lawrence Freedman

This week my blog consists of the review I wrote for Strategy+Business of Lawrence Freedman’s Strategy – a History:

Lawrence Freedman defines strategy as the central political art. “It is about getting more out of a situation than the starting balance of power would suggest,” he writes. “It is the art of creating power.” This definition allows strategists to assess outcomes, but Freedman, professor of war studies at King’s College London, knows that it does not offer them much guidance in enhancing outcomes. For that, practitioners have to appreciate the evolution of our understanding of cause and effect in complex social situations, and the role that power plays in those situations. Freedman’s new book, Strategy—an erudite, encyclopedic study that will surely become a standard reference in the discipline—offers just such an appreciation.

This 750-page book is organized into five parts: (1) strategy’s origins in Western thought, (2) military strategy, (3) political strategy, (4) business strategy, and (5) strategic theory. Sir Lawrence (he was knighted in 2003) begins at the beginning, tracking the origins of strategy in the Hebrew scriptures. There, in the archetypal story of David and Goliath, Freedman discerns the basic polarities of strategy: cunning and strength.

Those two qualities are opposing tensions that spiral like the arms of a double helix throughout the book. They were embraced by both the Greeks and the Romans, although with very different attitudes toward their legitimacy. For the Greeks, the wily Odysseus’s Trojan horse was the epitome of strategy, whereas the more powerful Romans favored standup fights and viewed anything else as underhanded.

The modern incarnation of strategy as an exercise in reason is, for Freedman, a quintessential product of the European Enlightenment. He traces the classic dimensions of strength and cunning into the strategies of annihilation and attrition, conventional warfare, and guerrilla warfare espoused by Clausewitz and other 19th-century military thinkers, and further back, to the 5th century BC and Sun Tzu.
In the political realm, the polarity morphs into a contest between Machiavelli’s lions and foxes, force and guile, oligarchy and anarchy; the first partner in each pair is employed by the establishment and the second by the radicals and the revolutionaries. Anarchists and Marxists next enter the story, as do academic pioneers, such as U.S. social scientist Albion Small, who wrote: “Conventionality is the thesis, Socialism is the antithesis, Sociology is the synthesis.”

Strategy jumps into business with the rise of the management class. Now, the tension is between deliberate and emergent strategy, and performance and learning, with the dawning awareness of “a new balance to be struck, between complete resistance to change on the one hand and oversensitivity to shifts in the environment on the other, between stasis and chaos.” Strategy has not always been sensitive to this tension and has at times overreached itself, according to Freedman: “Business strategy, like military and revolutionary strategy, could suffer from its own heroic myths. It acquired an unrealistically elevated status as the ingredient that would make all the difference between success and failure…[by overlooking] the importance of chance and circumstances in explaining success.”

Freedman’s masterful synthesis in the final part of the book outlines the limits to models of rational choice. Here, the polarities of strategy become existential tensions in the guise of Daniel Kahneman’s System 1 (spontaneous, associative) and System 2 (calculating, deliberative) modes of thought. Freedman asserts that strategy begins in the urges and passions of System 1, and then moves from intuition to deliberation as System 2 is called upon to find arguments for and against the proposed action.

The role and influence of narrative is a second notable theme woven throughout Strategy. Although the human brain is highly receptive to stories, the author finds that their explanatory power is limited. Narratives of executive and corporate success tend to exaggerate the role of individuals and the importance of conscious, deliberative action in achieving preset goals. According to Freedman, it is more fruitful to think of these narratives as scripts. This narrower definition allows more control over meaning and interpretation, and there is a natural link between script and performance that enhances the execution of business strategy. The main advantage of scripts, however, is that they allow for improvisation.

“A strategic plan, relating available means to desired ends through a series of steps which if followed carefully and in sequence produces the desired outcome, suggests a predictable world, with cause and effect known in advance,” writes Freedman. “One large conclusion of this book is that such plans struggle to survive their encounters with an awkward reality…. There is only one action that can be anticipated with any degree of certainty, and that is the first move of the central player for whom the strategy has been devised.” And that, in a nutshell, is the central truth illuminated in this ambitious and impressive new book.