After the discussion of my HBR blog, “Stop Trying to Engineer Success”, died down on the Harvard site it continued, at least in name, on a thread in Systems Thinking World (STW). With over 17,000 members, STW is an unusually active group, with a comment to topic ratio of about 25:1. In contrast, the Center for Creative Leadership site has over 28,000 members, but the comment to discussion ratio has deteriorated over the past four years to 1:1.  In other groups that struggle to get participation discussion topics outnumber the comments by a wide margin.

I say that the discussion “continued in name” on STW because it is a notoriously fragmented group and whatever the nominal topic is, the comments can go anywhere. What the discussion highlighted for me was the predominantly analytical (engineering) approach to systems thinking held by many participants, based on what seemed to be a scientific materialist view of the world. This belief is on the right hand side of what can be thought of as a spectrum of beliefs about reality, ranging from idealism (on the left) to materialism (on the right). On the left, spirit or mind is prime and matter is secondary; on the right it’s just the other way around. Of course that simple dichotomy vastly oversimplifies the situation and there are a huge number of positions in between.

Here is a one response from STW:

“Engineering, the selection and arrangement of technologies to suppress a problem, works fine if a) done properly and b) the stated problem actually exists. However, in most cases the presumed problem is sheer fiction so even the best engineering is not going to result in enterprise success. The key lies in discovering the problem(s)…”

Of course it is the discovery of the problem that requires an ecological approach so that one can tell what one is dealing with – complex, wicked “mess” or a just a complicated problem that is amenable to engineering solutions.

Another (software engineer) seemed to favour engineering solutions, except when applied to himself:

“You can mess with machines and chemicals and they won’t notice your interventions. But when you mess with people, they notice. Personally, I am one of the “cats” and I don’t respond well to being herded, regardless of the herdsman`s intentions.

We generally expect to be able to predict secondary effects of material systems and engineer appropriately. However, predicting secondary effects in human systems is somewhat more difficult. Nevertheless, it can be done. It is an additional speciality.”

At the root of many of the arguments on STW are fundamental disagreements about the nature of reality (ontology) and how we know about it (epistemology). One of the participants wrote:

“I am now wondering if business organizations are really complex systems; and if they are actually non-complex systems that host complex problems. So, though businesses suffer complexity, the business function itself is not complex.   I ask because, as I said earlier, I believe skillful and artful contrivance (emgineering) to be foundational for business “survival”. If that’s true, how can business organizations be complex?   Where am I missing the boat here?” 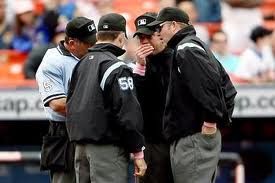 I am afraid that what’s missing the boat is the word “really”.

“They ain’t nothin’ ’til I calls ’em” acknowledges the third.

The three views reflect three different perspectives on epistemology. The first is scientific realism – the assumption there is a reality “out there” that we can represent more and more accurately “in here”. The second is idealism – the assumption that reality exists only in the mind. And the third might be called “constructivism” – the belief that there is something out there independent of us but what “it” is is only partially knowable and we construct what are inevitably partial understandings of it. This view is opposed to the objectivism of the first umpire and the idealism of the second and embraces multiple approaches.

For me the spirit of an ecological perspective and systems thinking lies with the third umpire, so to ask whether organizations are “really” complex systems is not helpful. We cannot know. What we can do is find out if it is useful to view them as complex systems. What does it reveal? What does it conceal? And then, when we are done, we can lay the perspective aside and move on to another one. But they aren’t “really” anything until we call ’em.