Is “Shareholder Value” a Myth or a Tool for Corporate Euthanasia? 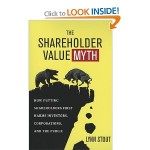 I have been reading Lynn Stout’s The Shareholder Value Myth: How Putting Shareholders First Harms Investors, Corporations and The Public. It is a short, highly readable book, written with the objective of demolishing what Professor Stout calls the “shareholder value myth”. She is the Distinguished Professor of Corporate and Business Law at Cornell Law School and makes a powerful case against the “ideology” of shareholder value. First, she demonstrates that it is not a requirement of U.S. law; second, she shows how it misinterprets corporate economics, and lastly she examines the evidence that it is effective in increasing returns to shareholders. The evidence on returns is inconclusive but it becomes clear that a firm’s adoption of the shareholder value model can destroy the commitment of its employees to the enterprise.

In The New Ecology of Leadership I single out the baleful influence of neoclassical economics on the field of management and the shareholder value model (SHV) that accompanied it as the most powerful catalyst for the decline of innovation and creativity in organizations.

Professor Stout shows clearly that the notion that the sole purpose of a firm is to maximize shareholder value is not grounded in law. U.S. corporate law holds that corporations are controlled by their Boards of Directors and it calls for them to exercise their best business judgment, which in the normal course of business can override any duties to shareholders. The famous Dodge v. Ford case, which is often cited in support of SHV, deals with the treatment of minority shareholders by a majority shareholder in a closely-held firm and not really with a public corporation. Secondly, the shareholders do not “own” the corporation legally. The corporation (as Mitt Romney recently pointed out, although not in a legal context) is a person for legal purposes. It owns itself, just as human beings own themselves. In the normal course of business a share of stock is a contract between a corporation and a shareholder that gives them highly limited rights. Only in bankruptcy are shareholders entitled to any residuals after legal obligations have been met.

This undermines the whole principal-agent theory that underpins organizational economics. This is the idea that the shareholders hire directors and executives to act as their agents, which Stout states is simply wrong as a description of public corporations. To put it in ecological terms, one might say that a corporation develops like any other person; first it is conceived and then it is born. Only once it is incorporated and a board of directors has been appointed, can it issue stock. And outside of bankruptcy – while it is “alive” – the board of directors controls it, not the shareholders.

Lastly, Professor Stout reviews the evidence that SHV improves returns to shareholders.  She argues that one cannot focus on individual companies for short periods of time. In these circumstances SHV can “unlock” shareholder value for particular investors at particular times but reduce aggregate shareholder wealth over the long term. The author likens it to “fishing with dynamite” – the first fisherman to do it gets a tremendous “harvest” but destroys the system in the process. It is the well-known “tragedy of the commons”, where what is rational for a wealth-maximizing individual is destructive of community welfare. Even in the U.K., where company law is much more favorable toward shareholder primacy, firms do not perform better for their shareholders.

This all assumes, of course, that we know what the interests of the shareholders are. As Stout points out, corporations are real, if intangible entities, but “shareholders” is an abstraction. The term covers a wide range of actors with very different interests; some are long-term investors, while others are not. She argues that short-term investors, like hedge funds, actually embrace corporate myopia. With their ability to concentrate their holdings in particular stocks, hedge funds are in a powerful position to impose a short-term speculative view. Activist hedge fund managers (they used to be called “raiders”) like Carl Icahn, for example, are concerned solely with their own return-on-investment and could not care less about those to long-term investors, who may have multiple interests, including the continuity of their jobs and the survival of their communities.

If there is little evidence showing that SHV benefits society in a sustainable way, there is growing evidence that it damages the internal culture of organizations, inhibiting creativity and innovation. Certainly this has been my experience working within diversified businesses. I can still remember how I felt when the CEO of the conglomerate who had acquired us gave an interview to the financial press in which he described himself and his colleagues as “guns for hire” doing corporate turnarounds. A disciple of the SHV model, he used it as a bludgeon to beat up on the divisions during the tortuous torture that was annual budget process. This mercenary attitude negated everything that we were trying to do to foster the engagement and commitment needed to supply superior customer service in what to many seemed like a hum-drum commodity business. The SHV model reduced everything (and everyone) to its (and their) lowest common denominator. 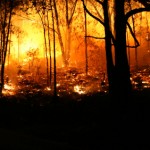 Fire in a Forest

So is the SHV a myth? If it is, it is a very powerful one. I like to think of it as an end-of-cycle tool in the management of enterprises. It is a means, not an end. When firms are conceived and born they have as many different purposes as those of their founders. If they survive and the communities they serve develop into markets, then they will have to focus increasingly on creating customer value. One would not think of using SHV in these early stages of growth. Once firms have to raise public funds to grow, then SHV will start to become more relevant but should not stop the firm from pursuing its original purposes. If their products and services age and become commodities, with limited scope for differentiation (some say that this stage is never inevitable), then SHV may be an appropriate catalyst for the liquidation of parts the enterprise and the redeployment of its resources. In short, SHV’s primary strength is as a tool for liquidating aging enterprises that have lost their mission and purpose. Its role is similar to that of fire in a lodge-pole pine forest; it tests the system. And, like fire, it should be used sparingly because these are people and communities we are dealing with, not trees. In short, SHV should be used judiciously and selectively with a very clear understanding that if it is deployed continually in any organization, it will crush the creativity and innovation required for renewal.

2 Responses to Is “Shareholder Value” a Myth or a Tool for Corporate Euthanasia?