← The Fusion of Ideas: Welding Imagination to Experience Halftime in America: The power of story →

Complex Systems – Learning from A River 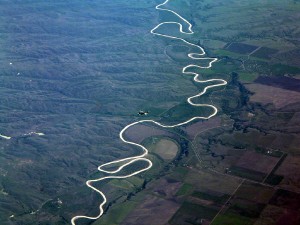 The Mississippi river complex drains the heartland of America, exiting, as everyone knows, below New Orleans. The river, its catchment basins, flood plains and deltas comprise a complex system that has evolved over the eons to deal with change. Huge fluctuations in rainfall and snowmelt are handled by allowing the plains on either side of the main channel to flood and the main channel itself twists and winds whenever the local topography permits it. On the flat plain the river writhes like a serpent.

Over the past five thousand years the delta mouth of the Mississippi has switched back and forth over a distance of three hundred miles along the coastline of Louisiana, like some giant, untended garden hose in full spate.  The state itself was largely created by the river and the vast amounts of topsoil, spread in thick deposits, makes the entire river valley one of the most fertile farming regions in the world.

The early humans in the region lived for millennia as hunter-gatherers, a lifestyle that made them as mobile and resilient in the face of change as the river itself. Although some of the hunters began to settle on the banks of the river as herders and farmers about a thousand years ago, settling began in earnest with the arrival of the Europeans in the early 16th century. Efforts to tame and “rationalize” the river for navigation began in the early 1800s. The Army Corp of Engineers was formed in 1802 and was given responsibility for river works during the War of 1812. Serious attempts to straighten and deepen the river began at about the same time with the coming of the steamboat. 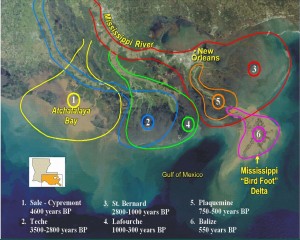 At first the strategy was to bypass obstacles like rapids and close off side branches to increase the velocity in the main channel to make it self-scouring.  For decades this approach seemed to work but it really just redistributed the silt into deeper, slower-moving parts of the stream until the river bed was raised above the level of the surrounding plain and the river burst its banks. These discoveries were typically made during periods of high water such as the huge flood of 1927, when the Mississippi broke out of its constraints in 145 places. The Army Corp of Engineers embarked upon a vast program of flood control as the users of the river and its flood plains began to depend increasingly upon its stability. Local communities began to build levees which contained the river, but as silt accumulated, continued to raise its bed well above that of the surrounding plain.

It has become clear that these efforts to keep the Mississippi stable have not banished change from the ecosystem. Rather they have changed the tempo and amplitude of change from the frequent, small adjustments of the river in its natural state to long periods of stability interrupted by much larger shocks. These big disruptions are made more catastrophic by the loss of lives and assets invested in the farms, cities and industries located close to the river. The scale of these disasters seems to be escalating and nowhere is this clearer than in the delta itself, where the full flow of the stream exits into the Gulf of Mexico. Here a much-reduced volume of silt is now carried in the depths of the sea, rather than nourishing and building up the wetlands, as it has in the past. As a result the wetlands are shrinking, a process that is aided by the penetration of salt water far inland, where it kills the plants that hold the swamps together. When hurricanes like Katrina come ashore, the wetlands are no longer able to buffer the city of New Orleans against the storm surge. More worrying still, since the 1950s the Mississippi has been trying to jump its channel 150 miles north-east of New Orleans to flow to the Gulf directly south along the Atchafalaya River. The Army Corps’ defenses against this held in the great floods of 1993 and 2011, but if it happened the river would bypass Baton Rouge and New Orleans altogether, creating a huge disruption in the American economy and the lives of its citizens. If this systems perspective on the river is correct, the risks of such a catastrophe grow every year.

What this example shows us is how complex systems, managed for stability and efficiency without a thought for renewal, can grow to very large-scale organizations that are highly vulnerable to catastrophic change. What is needed is systemic thinking of the kind outlined in my new book and systemic action, not to dominate nature, but to harness her power to take us where we and she need to go.