← The Ecology of Digital Transformation: Sense-Making in Silicon Valley Words and Looks: Leadership Lessons from A Christmas Carol →

Don’t Mistake Outputs for Inputs: The Folly of Trying to Plant “Cut Flowers” 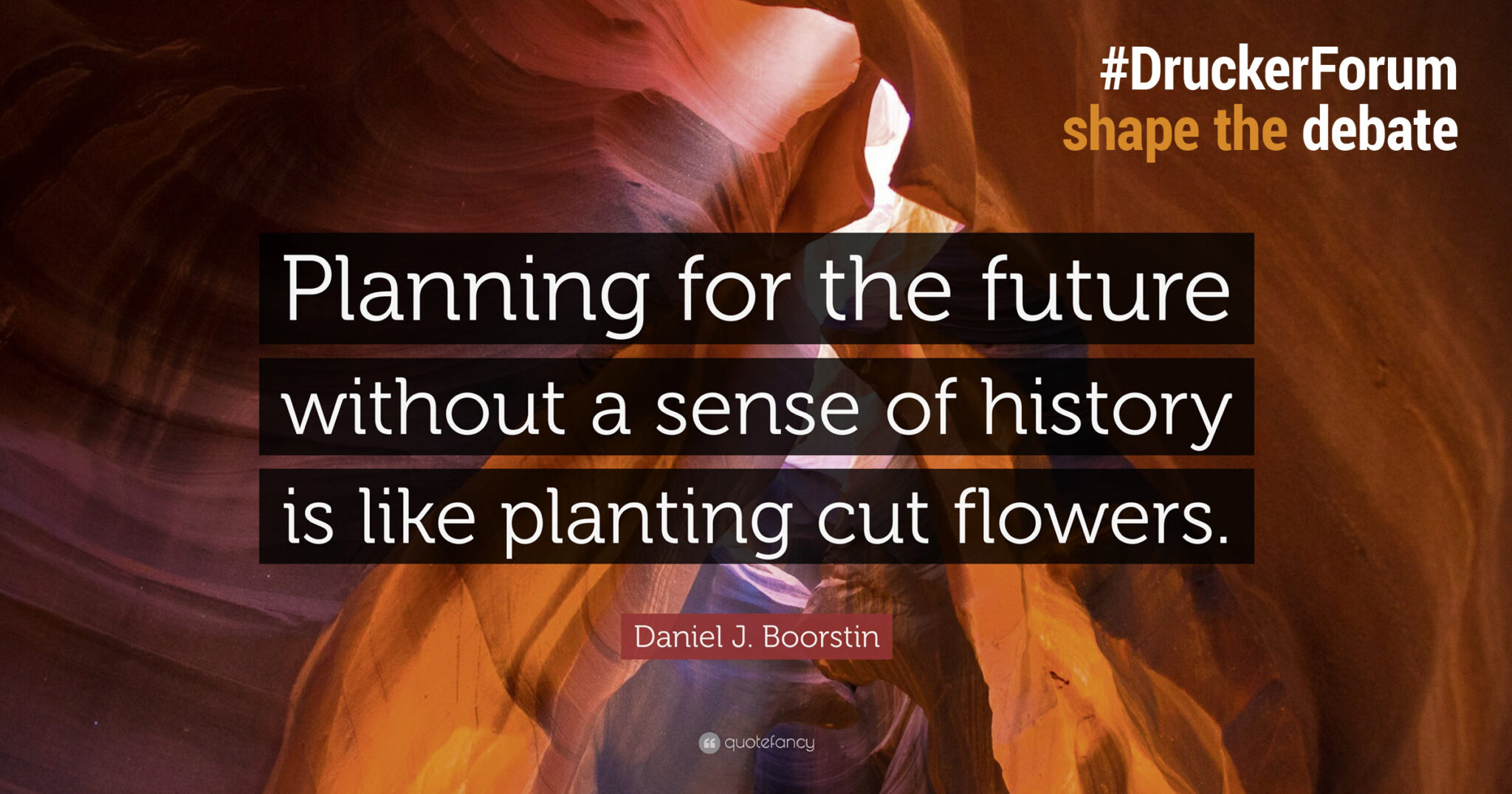 Why does so much management advice sound reasonable but turn out to be of little value? Most readers will know what I mean. Take the following guidance on how companies can ‘accelerate their agile transformation’:

What’s not to like? Well, that’s the problem. The first test of any management advice is to ask, “Is the opposite also true?” If not, then the statement is a simple truism like each of those above. Clearly one wouldn’t want a C-suite with an anti-agile mindset nor a firm with the wrong mix of talent and so on.

Nevertheless, some truisms bear restating because they deal with priorities – necessary conditions – without which change efforts may fail. So, we should look at this advice more closely. The problem is that each of the sentences is a linguistic trick. It starts with a verb, which makes it sound like an action, but it’s really an achievement, a desirable outcome. This is why one can’t disagree with them. They are like cut flowers: the spectacular result of a creative process but not its cause. They are emblems of success, outputs not inputs. To be truly helpful these generic ‘whats’ will have to be turned into specific ‘hows’ – how to ‘create a C-suite with an agile mindset’ in this organization, in our situation, with these people, right here, right now. And that’s where things get difficult. Every organization is different: history and context matter. Priorities will differ and what works in one situation may not work in another. And in the end it will turn out that the cluster of attitudes we call an ‘agile mindset’, like so many other ‘success factors’, is itself an emergent property, a consequence of a successful change effort, not its cause.

Many writers gloss over these problems by treating corporations as if they were rational decision-makers, actors in their own right, with clear goals. Companies are said to have ‘found ways to infuse a higher-purpose calling into their culture’, they ‘leverage their core capabilities to enter new growth markets’ and ‘unleash the creative abilities of their people’. Personifying corporations as actors in their own right may be useful for headlines but it’s unhelpful when we are trying to understand cause-and-effect in complex systems. When The New York Times publishes a report that “Boeing Fired Its Leader” its journalists are using writers’ shorthand to report the outcome of a complex process, not to describe the decision of a lone actor.

What Is To Be Done? Grow Your Own Flowers!

Peter Drucker contended that a every business had two tasks: the one administrative, the other entrepreneurial. Administration is needed to make the today’s business effective (efficiency is a minimum condition) and entrepreneurship is needed to create tomorrow’s business. These are the twin elements of performance.

Unfortunately, these two activities demand different logics, the one analytic and the other integrative. Administrative logic is that of the engineer: breaking down complicated mechanisms into their elements, identify causes and optimizing the parts to improve the whole. Or perhaps it that of the plumber: clearing blockages and stopping leaks. Whatever the metaphor, it is an analytic process and it has been the default approach for Anglo-American managers for the past seventy years. It is necessary but not sufficient. Used on its own, it has been the root cause of a lot of true-but-useless management advice that ignores history and context.

For the logic of entrepreneurship is integrative, synthesizing rather than analytic. It is more like that of a gardener than a plumber, someone who brings together people and resources: selecting people for their growth potential and the contributions they can make and then creating and maintaining the conditions in which they can grow, individually and collectively.  It’s about anticipating effects through pattern recognition developed through experience from the past, mixed with a vision of future. Gone are the clarity and certainty of administration to be replaced by the confusion and uncertainty of innovation.

The twin logics are often described as scientific management and humanistic management respectively, but the relationship between them has been a vexed one. As recently as a decade ago Adrian Wooldridge, Bagehot columnist for The Economist, described it as a ‘battleground’ between hard and soft management.  Paradoxically, successful entrepreneurial activities have plenty of vision, leavened with strict observance to detail and process There is a complex dynamic between contradictory, yet interdependent processes. The result is dilemmas that have to be lived, rather than problems to be solved.  With dilemmas, opposites are always true, depending on the context. To plan for the future we have to know the past.

Thus the practice of management is all about sense-making, using the integrative powers of narrative to make sense of the situation in which the enterprise finds itself, what the people know and can do and the actions the situation demands. It is about creating the conditions for emergence. It’s about helping individuals understand their own stories, make meaning from their experiences and anticipating what might happen.

This blog began with some simple truisms so it’s fitting that it should end with some profound truths. This is the wisdom from the past that, it sometimes seems, we have to keep on discovering and rediscovering through experience:

Over a century ago, management pioneer Mary Parker Follett (1868-1933), one of Drucker’s greatest resources wrote:

“The skillful leader then does not rely on personal force; he (sic) controls his group not by dominating it but by expressing it. He stimulates what is best in us; he unifies and concentrates what we feel only gropingly and scatteringly, but he never gets away from the current of which we and he are both an integral part. He is a leader who gives form to the inchoate energy in every man. The person who influences me most is not he who does great deeds but he who makes me feel that I can do great deeds.” (The New State, 1918)

And 1,500 years before Follett, Lao Tzu, the semi-legendary author of the Tao Te Ching, wrote something like this:

Learn from the people

Plan with the people

Begin with what they have

Build on what they know

Of the best leaders

When their task is accomplished

The people all remark

“We have done it ourselves.”

Regular readers of my writing will recognize this blog for the 2022 Drucker Forum as a modified and much abridged version of https://www.linkedin.com/pulse/true-useless-why-so-much-management-advice-sucks-what-hurst-frsa/

Over forty years ago I went through a management experience that changed my life and career path. The firm I was working for was taken over in a leveraged buy-out that went spectacularly wrong. For the next four years we managed through chaos to a new order, transforming people in the process. The HBR article I wrote and subsequent book became “best sellers” and set me off on a decades-long quest to understand what had happened to us and why.

Now, forty years later, I think I have a better idea of what the real issues are. It all begins with the acknowledgement that the tensions between scientific and humanistic management are part of a much deeper set of dualities that spiral throughout our existence as individuals, families, communities, organizations and societies. They have grown in complexity as our cultures and our institutions have grown more complex. They coil through philosophy in general and the history of management thought in particular. Here the dualities are familiar; exploitation vs. exploration, calculation vs. judgement, individual vs. team, performance vs. learning, detachment vs. immersion and so on and on.

To grapple with the tensions – the dilemmas and the paradoxes that underly them – it is helpful to adopt a dual-process approach to cognition. Such frameworks have been around since the beginning of recorded history, but they are more prevalent in Eastern thought e.g. Taoist philosophy, than they are in the West. This is starting to change e.g. Daniel Kahneman in his 2011 book Thinking, Fast and Slow. He, together with some other cognitive scientists, call them System 1 and System 2. System 1 a.k.a. ‘intuition’ is unconscious. It works fast, effortlessly and associatively and it is often emotionally charged. System 2 a.k.a. ‘reasoning’ is slower, conscious, effortful and deliberately controlled. It often follows rules.

Kahneman set out to show the flaws in System 1 and developed what has been called the heuristics and biases (HB) approach. It has been widely embraced by mainstream Anglo-American management thinkers, who are devoted to the Rational Choice Model and System 2. The HB approach has been criticized by people like Gerd Gigerenzer, who demonstrate the power of System 1 to make “fast frugal” decision under conditions of uncertainty. More recently I have learned of Gary Klein’s work on Naturalistic Decision Making (NDM) that throws light on what we mean by intuition. Klein has studied how experts (firefighters, emergency room personnel etc.) make decisions under conditions of time pressure, high stakes, inadequate information and uncertainty.  He found that they do not identify options, evaluate outcomes and use rational choice models. Instead, they used their experience (personal and vicarious) to recognize patterns, simulate the results of actions and then act. Interestingly Kahneman and Klein wrote a paper together titled “Failure to Disagree”. In it they agreed that HB seemed to work as better approach in laboratory situations dealing with toy problems, while NDM was better in practice handling real ones.

In short, when you are trying to make sense of people, enterprises and management, history and context matter!