This is the third in my series of blogs triggered by Harvard history professor Jill Lepore’s criticism of HBS professor Clayton Christensen’s theory of disruptive innovation. Although her curiously jumbled assessment was wide of the mark, it presented an opportunity for me to outline an ecological interpretation of disruption, rather than the mechanical readings that are so common and seem to be favoured by Christensen himself.

Last week I translated disruption into ecological concepts, using Canadian ecologist C.S. “Buzz” Holling’s adaptive cycle and the larger concept of panarchy, which looks at the interaction of these cycles at different systems levels. This week I add the cognitive dimension, which turns the adaptive cycle into the ecocycle, allowing one to use ecological analogies to understand the transformation of human organizations. In Crisis & Renewal I used Berkeley professor Jeffrey Pfeffer’s triad of perspectives on action: emergent, rational and constrained to supply this cognitive dimension and to suggest that they might represent three stages rather than three static categories.

Last week I discussed panarchy, the ecological equivalent of hierarchy, using the adaptive cycle. Here is the equivalent using the ecocycle: 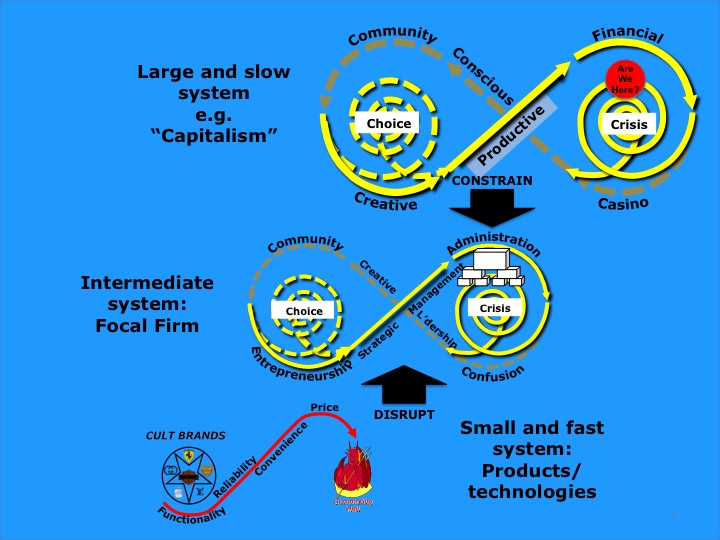 The Ecological Equivalent of Hierarchy with Ecocycles

Like last week’s, this systems framework is a three-pane window that can be shifted up and down multiple systems levels. The levels selected are a matter of choice: In this case in the middle is the “focal firm”, the organization whose dynamics one is trying to understand. It is shown as an ecological process, emerging (arbitrarily) from community, the “soil” of entrepreneurship, growing through strategic management (reason), and maturing in administration (power). Here organizations tend to get “stuck” and unable to adapt to change, which sets them up for crisis and confusion, requiring creative leadership to take them back into communities of trust and practice, where creativity and innovation are nurtured.

The level above is the context in which the firm is operating; in this case I have labeled it “Capitalism”. Capitalism too is shown as an ecological process, beginning in community, and going through a series of stages: creative, productive and financial, where it too tends to get stuck, creating crisis and the emergence of “casino capitalism”. The red “Are we here?” label suggests that we have been through one spiral of this so-called “success trap” and may be headed for another. To get out of this trap may require a series of crises and a social movement to take the system as a whole back into community. I have labeled this stage “conscious capitalism”, because I see the current “conscious capitalism” movement as an attempt to do this, even though I fear that the movement is too superficial to get any real traction.

As the large, slow component of this three-pane systems “window”, capitalism constrains the activities of the levels below it. Constraints are not necessarily bad: constraints in the form of resource limitations are often the spur to creativity and innovation. Constraints in other forms, however, can be harmful. For instance there is no doubt that the emergence of financial and casino capitalism, which coincided with the rise of the shareholder value movement, has encouraged the widespread short-term outlook of many public corporations and the systemic abuse of stock options as a form of executive compensation. 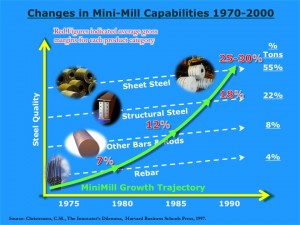 On the level below the focal organization are the smaller, faster processes that characterize the products and technologies level. Here I have shown the classic product life cycle with products going through the typical stages from functionality through reliability and convenience to commodity “hell”, where price is the only consideration. As smaller faster processes, new products and technologies can disrupt the levels above them, although disruption theory seems to apply more readily to industrial products, where the buying decision and the user experience are usually separated. In The Innovator’s Dilemma Christensen gave the example of how in the steel industry mini-mills using scrap-fed electric furnace technology disrupted the integrated mills with their large-scale blast furnaces (see insert above). The mini-mills disrupted them “bottom-up”, starting with the low-margin, low-quality reinforcing bar (“rebar”), which was all they could make initially. Then, as quality improved, they moved upwards to higher-margin, higher-quality products until eventually they reached the more lucrative structural and sheet steels. 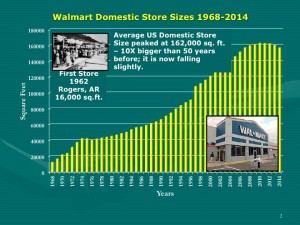 In The New Ecology of Leadership I showed how the growth in number and size of Walmart’s stores could be looked at as an ecological phenomenon. Sam Walton perfected the technique of making money from small-scale variety stores during his time as a manager of a Ben Franklin franchise. His first Walmart store was 16,000 sq. ft. in size and the subsequent stores averaged only 12,000 sq. ft. With this small footprint he could put stores where his rivals like Sears, Roebuck and the fledgling K-Mart could not afford to go. He too, like the minimills, disrupted his much larger competitors “bottom-up”, in his case by starting in the poor, rural areas and then working his way into the cities. In that process, as the graph shows, the average size of stores grew steadily. Fifty years later the average store size was ten times bigger that the first store. 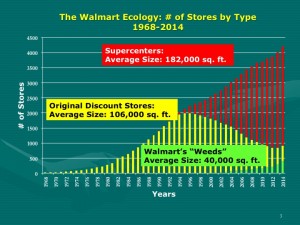 At the same time, Walmart has been changing its store formats, replacing the original discount stores with a combination of larger supercenters and small-format neighbourhood markets. The objective of these smaller stores is to keep small-format competitors from doing to Walmart what it did to Sears, Roebuck and K-Mart over the past fifty years! I think of them as the Walmart equivalent of “weeds”: agile, opportunistic organisms that have evolved to exploit small-scale, often ephemeral, pools of resources and then to move on as they are replaced by larger-scale, slower-moving but more efficient organisms. Of course the new competition for Walmart is coming from the web and it remains to be seen how they will handle that challenge.

In the ecological framework the building of growth and wealth take place on the long, slow front loop of the ecocycle, while the destructive processes are much faster. Ever since the First Industrial Revolution this has posed a problem for policy makers with the social disruption it has caused. All the evidence is that this is and will continue to be the case during the current era. As digital engines are used to enhance mechanical ones and used in their own right to replace much of the routine work previously performed by people, there will be continued commoditization of skills. In addition many fewer jobs are likely to be created than in the past. When Facebook bought WatsApp for $19 Billion it had only 55 employees! This will cause huge disruption in traditional employment patterns.

Every society has to find its own way of handling the tension between the forces of continuity and change, creation and destruction. This was always Peter Drucker’s central preoccupation and it seems likely to remain that of policy-makers in all institutions for some time to come.