← The VW Debacle: How Large Successful Organizations and Institutions Can Become “Bad Barrels” And What To Do About It Pope Francis and the Environment – Transformational Leadership in Action →

Claiming Our Humanity in a Digital Age: Big Questions in Vienna 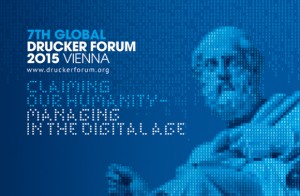 The theme of the 2015 Drucker Forum that ended in Vienna two weeks ago was “Claiming Our Humanity: Managing in a Digital Age”. Nearly 500 management academics, business people and management consultants from all over the world attended the two-day conference in Vienna.

The preliminary events began with a CEO Roundtable on the afternoon of Wednesday November 6. The opening ‘provocation’ was supplied by Tom Davenport and Julia Kirby’s June 2015 Harvard Business Review article “Beyond Automation”. In it they address the threat that artificial intelligence in the form of smart machines is encroaching on knowledge work to such an extent that it will lead to widespread unemployment. In the past machines took over work that was dangerous, dirty and dull. Now they seem to be taking over decision-making roles. Does it mean automation and the replacement of humans or is there scope for augmentation of human cognitive powers by machines? Should we be worried? The Davenport/Kirby shorthand answer, “Yes-No-Yes”, captured the both uncertainty of our questions about the future and the equivocality of the ‘answers’.

In the two days that followed the executive roundtable speakers and participants alike struggled to understand these questions and to come to grips with Peter Drucker’s acute observation that the major questions regarding technology are a not technical but human. The result was an exhilarating roller-coaster ride with unsettling plunges and thrilling loops that deposited all the riders safely at the end, but with their brains lightly fried. What follows is some of the highlights from the conference.

Tensions and dilemmas were everywhere at the forum. Are we dealing with a technology issue or a mindset issue, technical or moral? Or both? Are there limits to the ability of machine to make decisions? Should there be? How about limits on humans? What if a smart machine had overruled Lufthansa’s suicidal pilot? What distinguishes the zealots from the Luddites; West Coast optimism from East Coast pessimism? Is it a generation gap? Who will be affected and in what way? In the short-term or the long run? How do we distinguish hype from reality? What should who do about what? What’s the game plan? How do you manage? How do you lead? What’s our theory of change?

The conference participants, like the speakers, were a mix of tech-friendlies and tech-skeptics, with a full spectrum between the extremes. A sharper division was that between the values and concerns of small entrepreneurial firms and those of large established organizations, both commercial and governmental. Most of the academics and consultants present seemed more attentive to the latter group, who are presumably their natural clients.

Above and Below the Algorithm

One of the more interesting comments on the role of digital technology came from transportation entrepreneur Robin Chase, who pointed out that major innovations like Airbnb and Uber are aimed at either slicing up or aggregating existing spare capacity in society’s physical assets. This is why they neither own nor produce anything. The assets (housing and automobiles, roads and infrastructure) exist already. They may be disrupting the hospitality and taxi businesses around the world, but at the society level, despite all the talk of a ‘sharing economy’, they are primarily efficiency innovations that will reduce more jobs than they create. This may explain the pervasive ambivalence toward such technologies that create short-term benefits for individuals (albeit through what some describe as insecure, contingent jobs) but may spawn longer run problems for communities. Those who work “above” the algorithm (a tiny minority) may be fine; those who work “below” it will struggle.

Would a Thinking Machine do the Haka?

What does it mean to be human? New Zealander Kevin Roberts, Executive Chairman of Saatchi & Saatchi, captured its essence in a video-laced presentation to illustrate the ‘unreasonable power of ideas’. Rational thinking leads to conclusions but it takes emotion to get action and to generate ‘loyalty beyond reason’. With the 2015 World Cup of Rugby still fresh in fans’ memories, his video of the ultimately victorious All Blacks using their Haka war cry to intimidate their opponents was a compelling example of how humans deal with challenges in a ‘Super-VUCA’ world that is vibrant, unreal, crazy and astounding. It was a very welcome break from the pervasive rationalism that dismisses such human phenomena as ‘biases’ to be countered and eliminated. Would a thinking machine do the Haka? Why?

Sherry Turkle, Director of the MIT Initiative on Technology and Self, addressed the growing movement among the digerati of people who would “rather text than talk”. She argued that communications technology makes us forget what we know about life. The result may be a second ‘silent spring’, an ‘assault on empathy’, that makes us less able to appreciate the situation of another person and to ‘give voice to the other’. John Hagel, Co-Chairman of Deloitte Consulting’s Center for the Edge, agreed, saying that technology brings out the worst in us and he stressed the power of narrative, the incomplete story that calls to its listeners to take action and see how it ends.

Peter Drucker once wrote that “The most important thing in communication is to hear what isn’t being said.” What wasn’t being discussed at the Drucker Forum was the either role of or limits to reason in management, organizations and work, both descriptively and normatively. Ever since the European Enlightenment there has been a struggle between Adam Smith’s “sociology of virtue” and the French “ideology of reason”. Smith contended that the essence of humanity was both a concern for justice driven by empathy and a preoccupation with self-interest enabled by reason. The French philosophes, however insisted on the primacy of reason. There is no doubt where Peter Drucker stood on this issue: he saw humans as living in a world of existential tensions, strung between their concern for others and their preoccupation with themselves. It is a world of “both…and”, not either/or, that offers continual opportunities for creativity and innovation. American management, on the other hand, theorists and practitioners alike, has tended to prefer the ideology of reason and the cult of efficiency that often accompanies it.

Several speakers at the Forum remarked that the CEOs of many large companies pursue efficiency to the exclusion of anything else. This approach places them firmly on the side of the machines and the use of digital technology to replace rather than to support people. Here is a symptom of the ‘mindset’ problem, but its root causes remain to be explored. One suspects that they lie much deeper than many imagine and that their exploration will have a huge impact on how we act and think. Fortunately this means that there is plenty of material for future meetings that will do well to match the intensity and excitement of the 2015 Drucker Forum.