← The Ecology of Health Care: in Sickness and in Health The Drucker Forum: A Bridge from the Past to the Future →

The Presidential Election: America In a Trap

The best laid schemes o’ mice an’ men gang aft agley and it is difficult to imagine how disruptive Superstorm Sandy must have been to Mitt Romney’s presidential campaign. He was effectively prevented from campaigning and forced to watch his rival playing Commander-in-Chief and collecting plaudits from Republicans and Democrats alike. Some observers have suggested that New Jersey Governor Chris Christie, whose egocentric speech at the Republican Convention left little doubt about his intention to run in 2016, seems to have seen his main chance in a second term for Obama, rather than taking on an incumbent Republican in four years time. Christie denies falling out of love with Mitt Romney of course and pleads the circumstance of the disaster that struck his state.

Perhaps. Who knows? It is has been such a sorry election campaign; the most expensive on record with unprecedented nastiness and bold-faced lies from both sides. Mitt Romney’s Mormon values don’t seem to have resulted in a discernably different tone to his approach. One egregious example is last week’s claim from the Romney campaign that Obama had colluded to sell Chrysler to the Italians so that they could move production to China. It sounded like a last ditch attempt to win Ohio and veteran political observers say that the candidate has to approve such desperate measures. If so, shame on Mitt.  In 2008 John McCain, to his lasting credit, refused to sanction last minute ads playing on Obama’s relationship with controversial cleric, Jeremiah Wright. But if the party machines are firmly in charge, the candidates may have little to do with it. George Orwell foresaw it all of course in his factional novel, 1984, which anticipated a world where power was pursued for its own sake.  The “party” does anything and everything it has to in order to stay in power and no one knows whether its advertised leader,  “Big Brother”, even exists as a real person.  One might ask the same question about American Presidential candidates!

America in a Trap

The ecocycle framework, which brings an ecological perspective to organizational change was developed to understand firms and their trajectories in space and time. But I firmly believe that it can be applied just as readily to larger social entities, like nations.  The slide below shows the cycle and the zone with the two candidates in it: 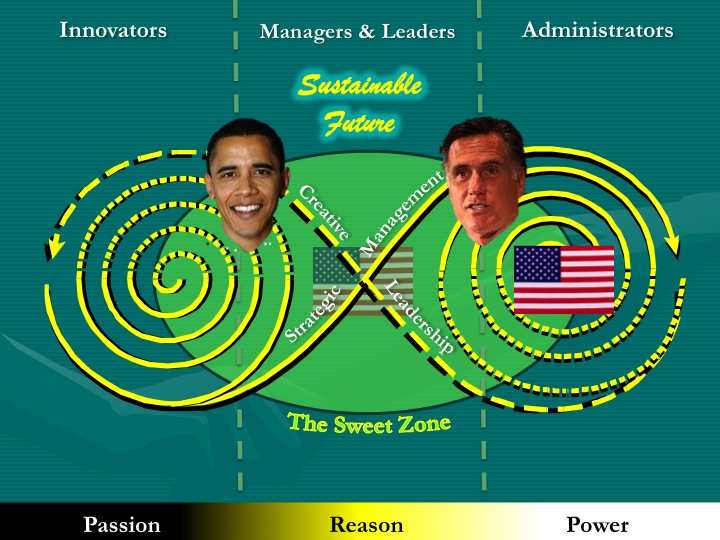 Ideally the country should be in the center of the sweet zone, where the ghostly American flag sits. Obama and Romney offer two distinctly different directions – Obama to the left, Romney to the right. Obama’s is a leadership role that offers a new integrating narrative. Of course his message of hope and change was most in evidence in 2008 but has faded since then, for reasons that will become clearer. Romney offers a manager’s role with the promise of greater efficiency of the status quo; his methods are strategic and analytic. Every organization needs both these roles to be played and circumstances will dictate which one needs emphasis at any given time. For in the real world it is impossible to keep an even balance between the two of them. Business booms tend to reinforce the status quo whereas business busts push us toward change. The Great Recession of ’08 set the stage for Obama rapturous election to his first term.

Unfortunately America is barely in the sweet zone; it is shown here as caught in a vicious spiral power trap on the right-hand side of the diagram (solid flag). Here, in the words of Walter Bagehot, creeds and institutions that were once invaluable have turned deadly. Yet we are unable to abandon them. The reasons for this are many, but all vicious social traps have the same generic feature – the short-term rewards for continuing the behavior conceal the long-run consequences of persisting in it. In this respect social traps are analogous to individual addictions.

I would suggest that the social traps in which congress finds itself are a large component of why Obama was less successful in his first term than many observers had hoped. As I explained in a previous blog, congress suffers from what Lawrence Lessig calls “dependency corruption”, which reinforces the status quo. Politicians need vast (and increasing) amounts of money to be elected and this means that they must cater to special interests. And they “create” special interests by keeping the tax code, regulations and legislation suitably complex. The result is winner-take-all politics to go with winner-take-all economics.

Bringing America Back Into The Sweet Zone

What will it take to bring America back into the sweet zone? Nature renews mature ecosystems by presenting them with challenges of various kinds – fire, flood, wind and disease. Hurricane Sandy is a reminder of how it happens, with much of the New Jersey shore now ready to be renewed. Whether it will be renewed or just restored to the status quo ante is going to be interesting. What will it take to renew American politics? Another financial failure on the same scale as the meltdown in ’08 would probably spur some action but it is going to take some time for the financial system to become fragile again. In past centuries religious revivals have resulted in movements that changed the face of politics. Today this seems unlikely. The appearance of a new charismatic leader is possible, although that was Obama in 2008 and his vision has been dimmed by his encounters with the challenge. A third party of the radical middle might help.

In all likelihood America and its people will just beat on, boats against the current.

One Response to The Presidential Election: America In a Trap