← The Drucker Forum: A Bridge from the Past to the Future Hunting Dynamics: To Think Out of The Box, You Must First Act Out of The Box →

I returned over the weekend from the Drucker Forum in Vienna. It was a great conference! From my ecological perspective it was an “open patch”, a place in which people with many different backgrounds and perspectives can gather, have an open dialogue and exchange questions and answers. This is the “soil” in which new ideas of all kinds can grow without being crushed by giant orthodoxies. 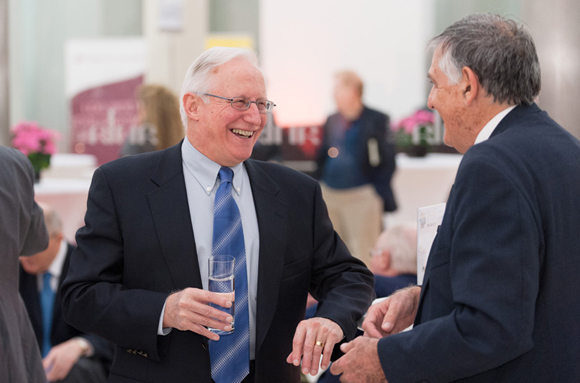 Me Chatting with Dan Schectman at the Drucker Forum 2012

On the first evening – a cocktail party for speakers and essay-winners – I introduced myself to a man standing alone. I noticed that he had a tiny gold medal pinned in his lapel. He was Dan Schechtman, winner of the 2011 Nobel Prize for Chemistry, and a pioneer of Israel’s entrepreneurial revolution. We spent about ten minutes talking about entrepreneurship, as well as his efforts to teach physics to very young children (5 year-olds). He described how he teaches the concept of phase states (solid, liquid and gas) by having them pretend that they are atoms and then forming different relationships with each other, depending on the state they are in. Thus for solids the atoms (children) are packed together as tightly as possible but for liquids they have to form molecules (two hydrogen atoms for every oxygen atom, in the case of water), which allows them to move around in little clusters, and so on. Professor Schectman is clearly a thinker in multiple dimensions and I was delighted to find that he was a fan of Bucky Fuller’s work. According to the Nobel Committee his discovery in the structure of crystals “… revealed a new principle for packing of atoms and molecules…this led to a paradigm shift within chemistry.” (Thanks, Wikipedia).

Playing in the Open Patch

The conference itself consisted of a series of plenary sessions and panels, more of which in future blogs. For the moment the big news is that my entry for the Drucker Essay Challenge, which was runner-up in the manager/entrepreneur division has been posted: PRACTICAL WISDOM – 2012 Drucker Essay. The awards were given out at a gala dinner that we held at the wonderful Palais Ferstel, which is attached to the Café Central, one of the key meeting places for the intellectual elite of Vienna in the late 19th and early 20th centuries. Apparently Vladimir Lenin and Leon Trotsky were regulars and the Vienna Circle of logical positivists met there often.

As I expected, I was by far the oldest of the award winners. When my turn came, I asked to say a few words to the assembled company. I began: “I should explain my “mature” condition. A few weeks ago I heard a wonderful quote from the CEO of LEGO: ‘You don’t stop playing when you grow old – you grow old when you stop playing.’” At that a sort of collective sigh ran through the group. I continued: “For me Peter Drucker never stopped playing and he never grew old.  Thank you very much.”

It was a great party that followed the awards and the enthusiasm and excitement among the younger essay winners was intense. As we all danced in a circle to the music of the well-known Austrian rock band Papermoon, it struck me that that the passion of these young people was as palpable as that of Dan Schectman’s and that the zeal with which he had spoken of entrepreneurship and teaching concepts from physics to very young children was quite as intense as theirs. It was this passion that seemed to permeate the entire conference and I feel sure that Peter Drucker would have endorsed it whole-heartedly: Never stop playing!

This entry was posted in General and tagged Bucky Fuller, Dan Schechtman, Drucker Forum, ecological perspective, entrepreneurs, Nobel Prize for Chemistry, Palais Ferstel, Papermoon, Peter Drucker, phase states, playing. Bookmark the permalink. ← The Drucker Forum: A Bridge from the Past to the Future Hunting Dynamics: To Think Out of The Box, You Must First Act Out of The Box →