← Is Conscious Capitalism A Conceptual Mess? The Counsel of Desirable Outcomes: Actions versus Achievements → 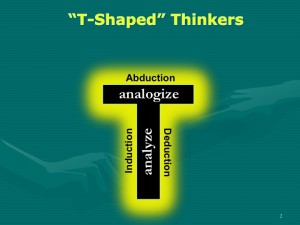 IDEO, the design and innovation firm, prizes what they call “T-shaped” individuals. These are people with a deep expertise in one field or domain (the vertical stroke of the “T”) and some expertise across several, often dissimilar, domains (the horizontal stroke of the “T”). IDEO finds that this combination leads to particularly creative innovations because such individuals can see patterns and explore insights from many different perspectives. What are the thinking processes involved in T-shaped thinking? I like to think that there are three major ones. The names of the first two modes – deduction and induction – are well known. The name of the third process – abduction – is hardly known at all, but it is critical to the whole creative process. In this blog I discuss all three modes of thought and their connection to systems thinking. 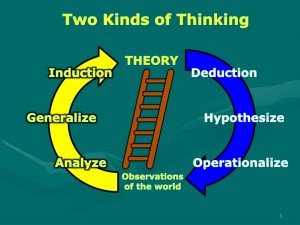 The Ladder of Abstraction – Deduction and Induction

These two modes of thought are by far the best known. I visualize them running down (deduction) and up (induction) the vertical stroke of the “T”, which is actually a ladder of abstraction. At the top of the T are coarse-grained concepts; at the bottom are events in the real world, or at least our perception of them. Deduction starts at the top and heads downward – it is “top-down logic” – it begins with premises and ends up with conclusions. If the premises are true and the logic is correct, then the conclusions must be true. Induction works in the opposite direction; it is “bottom-up logic”. It begins with specific examples and then attempts to draw general conclusions from them. Whereas deduction works with certainty – it’s either right or wrong – induction is concerned with establishing probabilities.

The term “abduction” was introduced to philosophy by the father of pragmatism, Charles Sanders Peirce (1839-1914). Abduction is also a form of thinking that, like induction, starts with specific observations but instead of going “up and down” it jumps sideways. The general form is:

…a surprising event, S, is noted

If A were the case, then S would be a matter of course

Therefore there is reason to suppose that A is the case

I must confess that I never understood what abduction was until I found myself practicing it! It was how I got to ecological and systems thinking in management:

If organizations were ecosystems, then crises would be a matter of course

Therefore there is reason to suppose that organizations are (like) ecosystems

Thus I think of abduction as fundamentally an analogical mode of thought rather than an analytic one. It allows one to see commonalities in patterns across domains by abstracting the common features from them. And the patterns that they have in common are usually based on systemic properties. 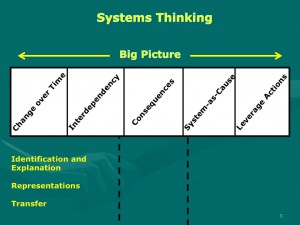 Rubrics of the “Big Picture”

Within each of these rubrics the systems thinker has to learn how to identify and explain what is happening, to be able to represent what is going on and then to transfer understanding from one situation to another. Of course “thinking” doesn’t have to be just verbal or symbolic. When it comes to abduction and analogical thought in general, we can “think” about the world in just as many ways as we can experience it. Thus music is an analogy for feelings of all kinds and patterns in music can remind us of patterns in other systems. Similarly bodily movements (as in dance) can mimic patterns from many other activities and can be used to express experiences that cannot be well conveyed using other media.

Although the Waters Foundation framework is directed at schools, it seems to me that the systems framework can be applied just as readily at much more advanced levels of study. For example, in management the ability to understand change over time, interdependencies, consequences, system-as-cause and how to leverage actions is critical. Similarly the ability to understand, explain and represent what is happening is central to leadership and our capacity to make meaning; and effective management is all about leveraging action.