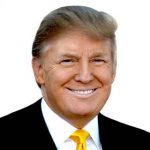 In the early hours of Wednesday November 9 2016 I was as bemused as everyone else. Donald Trump had won the presidential election and would be the 45th President of the United States. The last polls I saw had given Hillary Clinton about an 80% chance of winning and none of the commentators had seen an upset coming. As a Canadian, however, I thought that the Americans had an awful choice to make and in the end the man I wanted to lose had beaten the woman I wanted to lose…. After my initial shock wore off I started to think through what had happened and what is likely to happen from an ecological/systems perspective.

Back in March I wrote about the ecodynamics of Donald Trump. I said that it was helpful to look at society and its institutions, not as static systems, but as ecological processes. From this perspective successful social institutions are conceived in passion, born in communities of trust, grow through the application of reason and mature in power. Here they tend to get stuck in systemic traps, structures that conserve the habits that made them successful, but render them inward-looking and insensitive to the changes that are going on outside. In his book, The Rise and Decline of Nations economist Mancur Olson describes how, over time, vested interests and rent seekers clog the system and prevent meaningful change. When this happens, as their familiar narratives break down, societies often reach for outsiders, radicals on the fringes, who offer either new narratives or the revival of old ones. Trump’s narrative is the latter, the promise to “Make American Great Again”, and restore an era of growth and prosperity last seen in the 1950s and 1960s.

How Much Can The President Do?

No candidate for political office ever talks about agency during an election – the extent to which any president can change anything once they are elected. They like to imply that there are no limits to executive powers and no constraints on what CEOs can accomplish. The real world is quite different. The ability of senior executives to change organizations and policy outcomes is highly variable and context-dependent. The type of business is also important. Real estate and shipping, for example, typically allow one executive to make big decisions at the top of small organizations at all stages of their life cycle. In other businesses the two occasions when CEOs can make the most difference is when enterprises are young (and small) and (sometimes) when they are in crisis. The advantage of both democracy and capitalism is that, as ecological processes, they constantly encourage institutional renewal by creating stresses that lead to small-scale crisis and continual change. Nevertheless democracy and capitalism themselves can get stuck in social traps of various kinds: the power or success trap is particularly common.

The political process in America has been gridlocked for some time and the causes are deep and systemic. From an ecological perspective American national politics is caught in a power trap. Lawrence Lessig has described the working of this trap in some detail. He contends that over the past few decades the American political process has been systematically corrupted by money. This is no ordinary bribery; that would be criminal. It’s a subtle, entirely legal form of dependency that the system allows and encourages. Politicians have become dependent on raising huge sums of money, both to win elections and to stay in office. It is estimated that they spend 30-70% of their time in fundraising! Lessig compares this dependency to a drug addiction that cuts politicians off from the general community and forces them to deal with a tiny fraction of the population (wealthy donors and their lobbyists) who can fund and feed their habit. The people’s business – issues where progress would benefit the nation as a whole – rarely get onto the table, because there are no lobbyists working for the people. As a result most of the issues that get considered are contested ones, where private interests are prepared to pay for a preferred result. For similar reasons politicians have little interest in simplifying regulations or the tax code unless there is a corporate client prepared to pay for their efforts. Commonsense gun regulation, which a clear majority of Americans support, may have clear societal benefits but these are distributed widely over time and don’t help one fight the fury of the powerful NRA when election time rolls around. 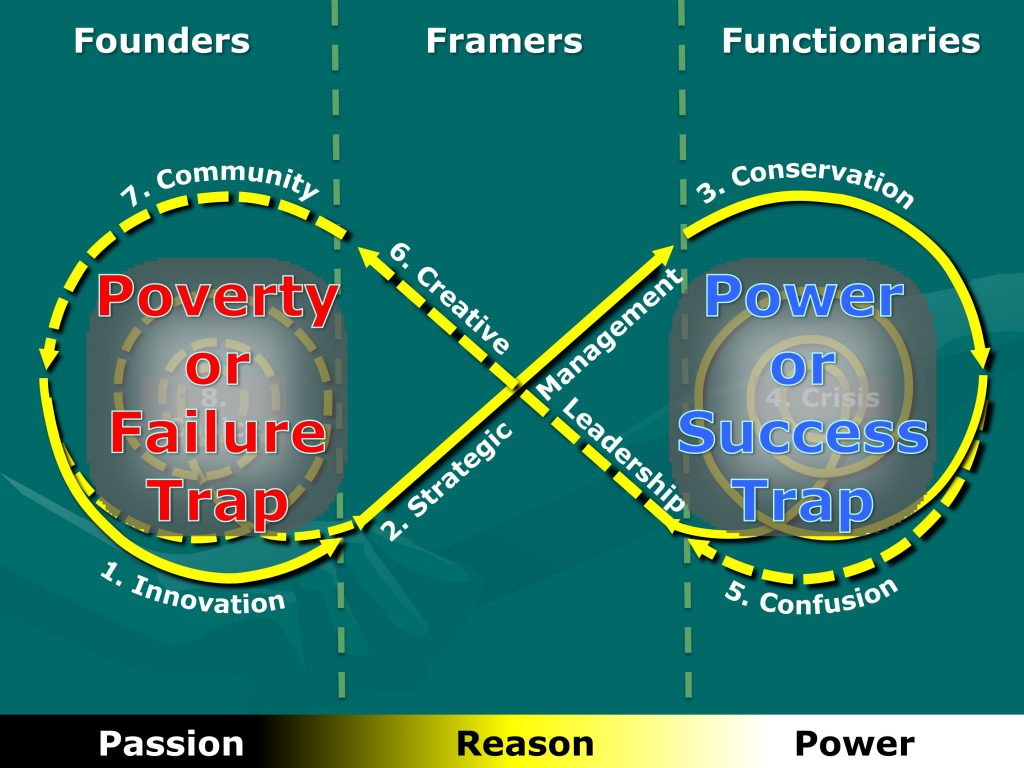 The diagram above shows the ecocycle and the twin traps that lie at either end. On the right is the power or success trap, where the system cannot stop repeating the behaviours and activities that have made it successful. It is similar to an individual addiction, where the short term rewards are positive but the long run consequences can be deadly. The adoption of shareholder value as the primary purpose of an organization has led many public companies into this trap of short-termism where instead of investing in the real economy companies spend much of their capital on share buybacks in a effort to boost their share prices. On the left is the poverty or failure trap where communities can cycle in misery, unable to break out of their condition. 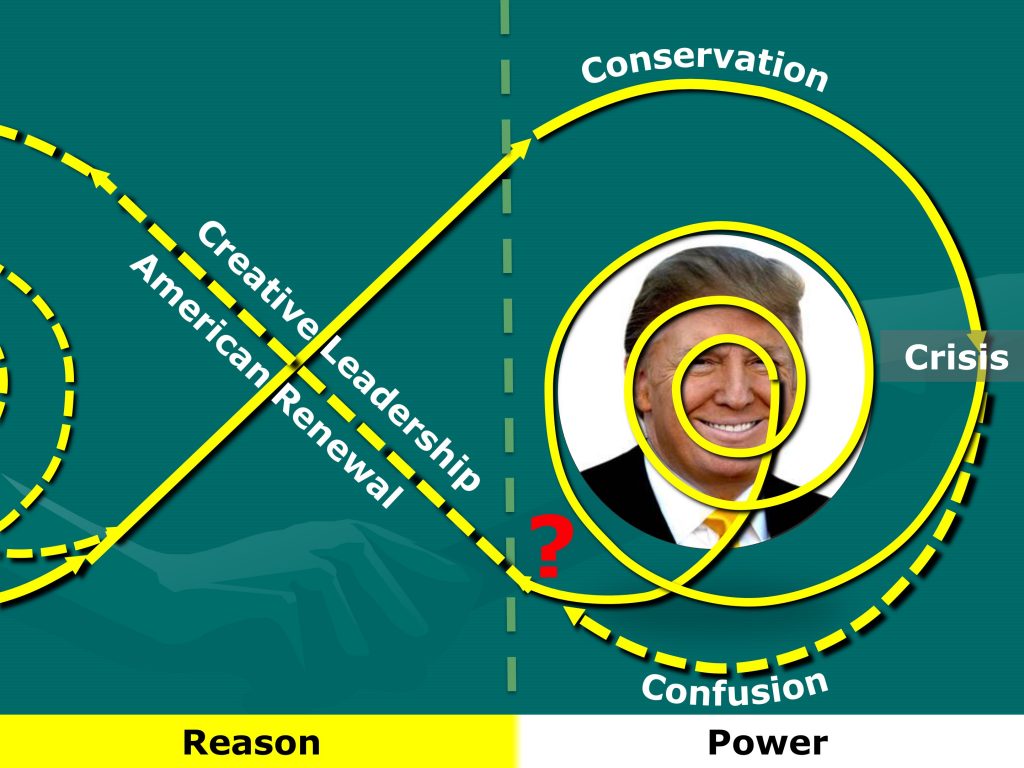 We can place Donald Trump in the middle of the right hand power trap. The question is whether he can break out of it to the left with creative leadership to renew the American Republic or will he get pulled back into the power trap?

Draining the Swamp or Drowning in It?

There is little doubt that, with Republicans controlling both the Congress and the Supreme Court, Trump will have more power to implement policy than Obama did, but the kinds of policies he can pursue will be determined by the Republican Party agenda. Mitch McConnell, majority leader of the Senate, has already said that Trump’s vow to pursue constitutional term limits for all members of Congress is not on the table. Similar, many of the components of Trump’s pledge to “Drain the Swamp” in Washington require much more time and effort than his campaign promises suggest. Lastly, Trump’s status as an outsider, which so helped him on the campaign trail is a real liability now that he needs to get things done. This is what Jimmy Carter, the last presidential outsider experienced. Trump’s lack of experience in running large-scale organizations means that he will have to rely heavily on those who have that experience. He will have to appoint people (often lobbyists) who have little interest in changing the game. With 4,000 appointments to make, his only hope is to reach across the partisan divide and choose the very best senior people and let them get on with it. Even his ability to do this is questionable, with the names of several political ideologues and even Batman-style villains being mooted for senior cabinet positions. If he appoints people like that the swamp will take him down.