← True But Useless: Why So Much Management Advice Sucks (and what to do about it). The Hammer and The Dance: The Case for Crushing the Coronavirus with Coercive Bureaucracy →

Peter F. Drucker and the Society of the Future 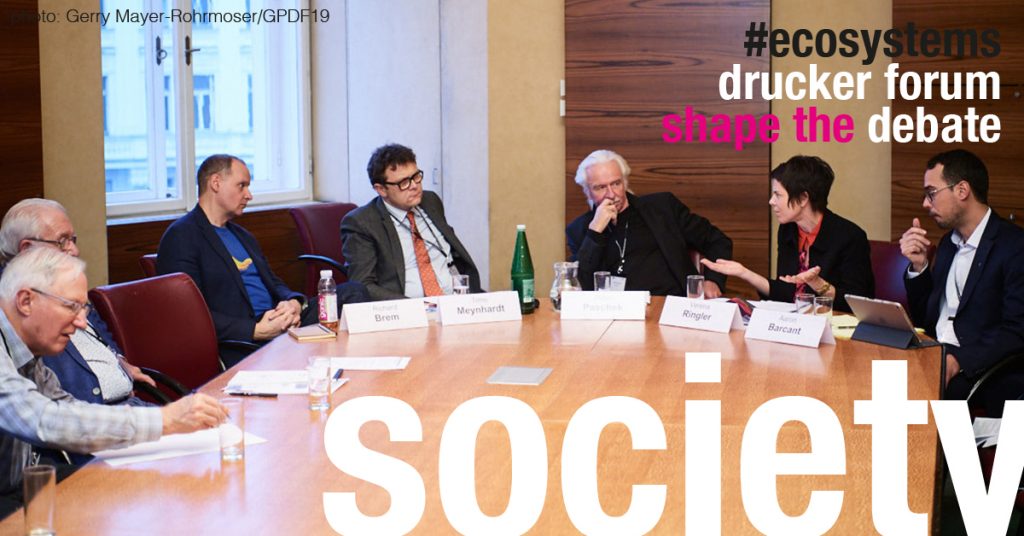 This is a report on a Round Table discussion at the 2019 Global Peter Drucker Forum. Click here for the LinkedIn version which has hyperlinks

The round table began with Richard Brem introducing the panelists and each of them summarizing why Peter Drucker’s work and vision mattered to them.

Drucker always argued that one’s worldview mattered to one’s understanding of one’s role and contribution in society and one’s ability to manage oneself and others. American philosopher Thomas Sowell, describes a vision as a ‘pre-analytic, cognitive act’ that helps simplify an overwhelmingly complex reality. Think of it as a walking stick that helps you travel over rugged terrain, giving you support when you need it and allowing you to probe the way ahead. A social vision gives us a sense of how the world works, of the nature of humankind, of causation and how social change happens.

As panelist Peter Paschek pointed out, Drucker described himself as a ‘conservative Christian anarchist’. While accepting the necessity of governance and government, he saw power and the yearning for power as the central problem of society, with that of managerial power and its legitimacy a particular concern. The political philosopher he admired most was Wilhelm von Humboldt, the pioneer of the modern research university, who found balance and harmony while managing the tension between continuity and change. Drucker was concerned with this balance at several levels, especially those of society and community. It was this interest that allowed him to see management as a social function, an organ of society that is responsible for the performance of institutions and gives the individual both status and function. Panelist Timo Meynhardt said that Drucker’s depth of thought and his emphasis on values – his practical wisdom – was his distinctive strength, making him a ‘companion in the darkness’.

Drucker had what Sowell calls a ‘constrained’ vision – a feature that he shares with thinkers like Adam Smith, Edmund Burke, the authors of the Federalist Papers and Friedrich Hayek among others. It is a vision of society as an evolutionary product with much wisdom contained in the traditions that are handed down to us. History matters and experience is critical. Order is emergent from the interactions of many individuals rather than planned and the emphasis is on practices, processes, incentives, trade-offs and prudence. This constrained vision was in contrast to the much less, if not unconstrained vision of his close friend, Christian socialist Karl Polanyi. While he and Drucker agreed on their ends – to tame capitalism and hold economic power to democratic account – they differed greatly on the means to achieve it. While Drucker regarded economic man as a once-appropriate idea that had been over applied, Polanyi thought it an outright mistake, with the ideal of a self-regulated market never existing in practice. Drucker’s concern over the very real limits to what the state can do and the ever-present risk of factional strife, required a large role for markets, albeit imperfect ones, as a valuable and effective tool to help balance the private sector against the state. Enlightened individualism must serve society. Polanyi, on the other hand, with his more utopian vision of the primitive community, saw a much larger role for an activist state (it was noted that Polanyi’s ideas have attracted renewed attention since the financial crisis of 2008 and the disenchantment with capitalism that has accompanied it).

The Role of History

For those with a constrained social vision history really matters. Panelist Aaron Barcant suggested that Drucker’s view of history matches that of Neustadt and May in their book Thinking in Time. Here is what they have to say about thinking of time as a turbulent stream:

“Thinking of time [as a stream] . . . appears . . . to have three components. One is the recognition that the future has no place to come from except from the past, hence the past has predictive value. Another element is recognition that what matters for the future in the present is departures from the past, alterations, changes, which prospectively or actually divert familiar flows from accustomed channels, thus affecting the predictive value and much else besides. A third component is continuous comparison, an almost constant oscillation from present to future to past and back, heedful of prospective changes, concerned to expedite, limit, guide, counter, or accept it as the fruits of such comparison suggest.” (p. 251)

Thus history has predictive value, not because the future will be like the past, but because some things will continue, habits will endure, and humans will tend to behave in the future much as they have behaved in the past, given similar contexts. We cannot predict the future, but studying history is a way of expanding our experience, making us resilient in the face of change, so that we can interpret the past to help us understand the present and anticipate the future.

Looking At The Present

The study of history may actually enhance a manager’s ability to stay in the present and to focus on doing, what is happening and has to be done.

As panel chair Richard Brem pointed out, Drucker was never a futurist. In 1992, relatively late in his career, Drucker identified himself as a social ecologist and wrote: ‘If there is one thing I am not…it is a “futurist”….it is futile to try and foresee the future….the work of a social ecologist is to identify the changes that have already happened. The important challenge in society, economy, politics is to exploit the changes that have already occurred and use them as opportunities.’

The events that mattered did not lend themselves to quantification. They happened at the margins of society. By the time they show up in aggregates and become statistically significant they are ‘past’. Drucker’s injunction was to ‘look out the window’.

When we ‘look out the window’ for clues to the future of society what do we see? Those with an unconstrained social vision sometimes talk of utopian moves toward cooperation on a larger scale and world government. The evidence around us indicates otherwise. The rise of populism and the disenchantment with both capitalism and democracy in the West suggest a movement toward disaggregation, with attention being paid to smaller units of cooperation. The failure of the federal government in America to address issues of popular concern has led to a renewed focus on the state and municipal government and local communities – the grass roots – as the places where things get done. Panelist Verena Ringler talked about the blurring of what is public and what is private and of cities like Palermo and Barcelona, where pockets of local cooperation are forming in opposition to the policies of national governments. Other cooperative communities, such as the well-known example of Mondragon, also offer alternative ways of coping with the tensions between democracy and management discretion, market forces and social forces, community and society.

‘What would Drucker have made of China?’, one participant asked. Karl Polanyi might have argued that the China case shows that capitalism is antithetical to democracy. Drucker would have taken a more developmental approach, perhaps quoting Berthold Brecht, ‘Food first, then ethics’.

The powerful play goes on….

This entry was posted in Change, General and tagged Constrained Vision, Drucker Forum, future of society, Karl Polanyi, Peter Drucker, Thomas Sowell, Unconstrained Vision, Vision. Bookmark the permalink. ← True But Useless: Why So Much Management Advice Sucks (and what to do about it). The Hammer and The Dance: The Case for Crushing the Coronavirus with Coercive Bureaucracy →