← The Map and The Territory: Complexity as Challenge and Opportunity Drucker’s Intent and Why MBO Fails →

Mission Command: An Elusive Philosophy Whose Time Has Come

This is the third blog in my series of reflections on the 5th Drucker Forum held in Vienna November 14-15, 2013. Among the many things that make this event so stimulating and memorable to attend is the numerous conversations that “bubble” up during the coffee and meal breaks among people who may never have met before. There are a lot of senior folk among the participants, with a wide range of experience, and they don’t hesitate to express their views! An additional bonus is that, unlike in many other conferences, the major speakers don’t fly in “seagull-style” to deposit their views and leave; they are usually there for the duration and are easily accessible during these informal sessions. As a result, while one may come out of the Forum physically tired, one is intellectually invigorated!

My blog this week is inspired by a question on our project management panel, when the discussion turned to project implementation and one participant asked “What about the leaders’ intentions?” What ensued was a discussion about mission command, the approach developed by the famed German General Staff in the 19th Century and espoused, if not always practiced, by all the leading armed forces around the world. This concept is now making its way into management. It seems that we may not be moving, as many pundits claim, from an era of “command-and-control” to one of “communicate and cooperate” but to a more creative, paradoxical condition of “command and collaborate”.

In 1955 Peter Drucker captured something of this paradox when he wrote in The Practice of Management:

When I discuss the meaning of this paragraph with executives they pick up the tension between the two sentences immediately, despite the presence of the smooth connector “moreover”. Drucker seems to be saying first, that a decision should be made as low in the hierarchy as possible, and then second, that it should be made as high in the hierarchy as possible. How do we do that?

The Scale of the Problem

The dimensions of hierarchy are scale in space and time. Ideally people lower in the hierarchy should deal with fine-grained decisions, where there is a short cycle time between action and result. Here they tend to learn about cause-and-effect very quickly as a consequence of fast, specific feedback. People higher in the hierarchy should deal with coarse-grained matters, where the feedback can be delayed and equivocal. As a result these folk tend to learn very slowly about cause-and-effect and the lessons they draw may be wrong. Think about global warming, a large-scale problem: while there may be some agreement that it is happening, there is little consensus on the causes, let alone the implications for action.

So every problem and every decision has a scale in space and time: it can be assessed for how “granular” it is and how long the lag in feedback is between action and outcome. Our understanding of cause-and-effect is the product of these two factors; the coarser the grain of the decision and the greater the delay between action and result, the less reliable our knowledge of cause-and-effect.

The German General Staff of the 19th Century understood the practical implications of this problem very well. They knew that the first casualty in every battle is the plan. To address this they developed a philosophy of command that they called Auftragstaktik – “mission tactics”. It wasn’t just tactics but a whole leadership philosophy of “leading by task”, that developed organically over a period of eighty years. It was in sharp contrast with Befehlstaktik or “leading by orders”, which was and is a perennial favourite. The command implications of Auftragstaktik were that no commander should issue an order that went into more detail than the scale at which he could appreciate the situation. A commander should never tell a subordinate exactly what to do, for that would remove the subordinate’s discretion at precisely those scales where only the subordinate could take effective action. The same caution applied to the subordinate’s subordinate, and so on down the line. If subordinates did not have the leeway to make decisions and take action on their own, each at their own unique scale, then they – and their organization – could not learn.

The idea of mission command was to set boundaries, to bracket the options and to create spaces where everyone from the highest general to the lowliest enlisted man had discretion to act in the interest of achieving the overall mission. Of course this meant that everyone would have to know and understand the overall mission and would have to be trained to act independently. In practice everyone was required to know the intent of the commander two echelons higher than their position, which meant that if their immediate superior was killed or wounded they could readily step into his shoes. To do this they would need the intuitive powers to assess a situation and the creative powers and initiative to take effective action. It also meant that not acting – sins of omission – would be criticized much more severely than acts of commission, even if the actions proved wrong. Trainees would have to be able to make mistakes and learn from them without having their self-esteem damaged.

All this implied a very different philosophy from the familiar command-and-control approach that required the issuance of very precise instructions. It embraced radically different theories of the nature of war, character and leadership, senior-subordinate relationships, training and education and so on. At its most fundamental level it required mutual trust between superior and subordinate at all levels of the armed forces.  Organizationally I find it helpful the think of the resulting structure as a nested hierarchy like a set of Russian dolls, where the outline of the doll is the leader’s intent: 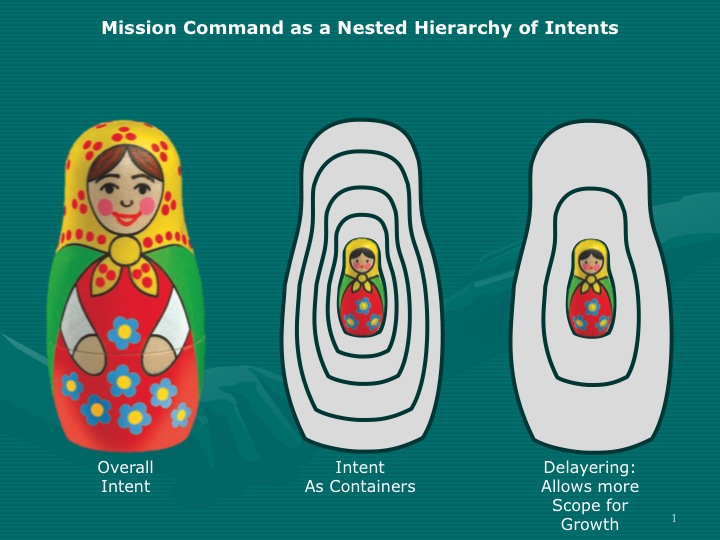 American military observers in Europe in the 19th Century seem to have had as much trouble grasping Auftragstaktik as their modern management counterparts have had in understanding the Toyota Production System. In both cases the practitioners tended to look for tools and techniques and could not grapple with the deep philosophical differences and assumptions about human nature. They had no trouble translating the field manuals, often replicating them word for word, but reproducing the behavior was another matter. We encounter the same problem in management today, particularly with the concept of strategy. Many practitioners look for strategic tools and techniques, which they then try to graft on to their own philosophies of human nature, management and organizations.  Then they wonder why they fail.

Take the ongoing distinction between strategy formulation and strategy implementation, which bedevils much writing and discussion on the topic. In the classic model strategy is deliberately formulated at the top of the organization and formally implemented at the bottom. This results in the so-called “execution gap”. What we need to bridge the chasm between the two is the concept of scale. We immediately understand that strategy formulation will likely be coarse-grained, while implementation is always more fine-grained. Once we take scale into account we realize that strategy must be “formulated” and “implemented” at many scales. Deliberate strategy, like a leader’s intent, must act as a container, setting boundaries, bracketing options and creating spaces to allow independent, creative action at all levels from top to bottom of the organization. Then, on its way “down” the organization, deliberate strategy may also encounter emergent strategy “bubbling” its way “up”, and in the process of being articulated and expanded. In the case of emergent strategy “implementation” may precede “formulation”: tactical breakthroughs may be exploited for strategic advantage. Discoveries made in the marketplace can grow to become an entire enterprise.

Thus, when we take scale into account, everybody in an organization formulates strategy and everyone implements it, but each at their own unique scale and scope. The philosophical implications of this for management practice and theory, training and education, are significant. To understand it, the study of Auftragstaktik, mission-command, will help. It is a philosophy whose time has come.

One Response to Mission Command: An Elusive Philosophy Whose Time Has Come