← CEO Succession at Intel: A Critical Decision Management and the Limits of Logic Part II →

Management and the Limits of Logic

I grew up in a middle-class English household that was not very intellectual. As a child I was cautioned against ever discussing religion, politics or money round the dinner table. As I grew older, I discovered that these were the only subjects I was really interested in! 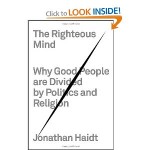 Recently I have been reading Jonathan Haidt’s The Righteous Mind, his reconfiguration of the field of moral psychology and his explanation of why good people are divided by politics and religion. His central metaphor for the human mind is that of a rider on an elephant, where the rider is reason and the elephant is intuition. Although it is not often posed in this way, the central question in moral psychology has been the relationship between the rider and the elephant. Haidt places the possible views on a spectrum ranging from Hume (the elephant is in charge) to Plato (the rider is in control). David Hume, a Scottish empiricist philosopher, was famous for his belief that “Reason is, and ought only to be the slave of the passions, and can never pretend to any other office than to serve and obey them.” Plato, on the other hand, believed that reason is or ought to be the master of all. In the middle, with an interactionist model, Haidt places Thomas Jefferson (a puzzling choice, but Haidt is a professor at the University of Virginia, an institute that Thomas Jefferson founded).

Haidt describes Plato’s view, that the rider is or ought to be in charge of the elephant, as the “rationalist delusion”, and shows how moral psychology has been under its spell for some time. That era is now coming to an end, with Haidt suggesting that “anyone who values truth should stop worshipping reason”.

Management and The Rationalist Delusion

As I was reading Haidt’s bestseller, it struck me that for the last five decades and more management too been in thrall to the rationalist delusion. It began back in the late 1950s with the efforts of the management academy to set the study of management on scientific foundations, with the hard sciences as their model and with economics as the example of what was possible in the social sciences. Emotion was tagged as the enemy of reason and the mind of the manager was idealized as factual and forensic. The “elephant” was seen a physically strong but mentally weak, with the rider’s reason needed to guide its every move. Plato would have been thrilled.

In The New Ecology of Leadership I describe how initially this change proved helpful. America was the only large industrial nation to survive World War II with its industries intact and, when the war ended, its large corporations stepped into the global goods gap that the conflict had created. The emphasis was on “more of the same”, a task at which logic excels. The siloed structures of the business schools matching the structures of their corporate clients and supplied the functional skills that every manager needed. In the aftermath of thirty years of the apparent madness that had gripped Europe it was a relief for psychologists and other social scientists to see human affairs at last placed on rational foundations. In addition, as Stalin’s and the Soviet Union’s true nature became apparent, the emerging Cold War created a stark contrast between the “Godless Communism” of the Soviet Union and the God-fearing Rationalism of American Capitalism. The advantages of the latter over the former were so obvious to most observers that the thought of questioning the assumptions that underpinned the system never occurred to them.

Now, fifty-three years later, everything has changed. The fall of the Berlin Wall in 1989 marked the collapse of communism under its own contradictions. But today, scarcely two decades later, capitalism is showing its own flaws and is plagued by its own contradictions. These paradoxes are deep and pervasive. At the level of the firm one of the most interesting puzzles is that the firms that do the best job of maximizing shareholder value ex post (after the fact), are the ones who don’t focus on it as a goal ex ante (before the fact). They focus on things like engaging their employees and creating customer value. This is a puzzle for economists, who insist on the primacy of shareholder value, but whose theories understand nothing about riders and elephants and equate logic with cause-and-effect.

Thus central problem is capitalism’s inability to come to grips with human nature and understand the dynamic tensions between rider and elephant, reason and intuition. We now know that emotion, far from being the enemy of reason, is essential to decision-making; reason can lay out all the options, but only emotion can prune the tree of possibility. Individuals who have lost their mental capacity for emotion can ratiocinate endlessly but cannot actually reach decisions; there are always more data to be gathered and more options to be considered. Thus the delusion that reason should be master of all can make it difficult to understand how many business decisions are actually arrived at. Too often reason cloaks the arbitrary exercise of power. 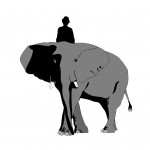 The Rider (reason) on the Elephant (intuition)

Haidt chose the elephant as his metaphor for intuition because they are large, smart, social creatures. The experimental evidence he cites is overwhelmingly in favour of Hume’s view that reason is the servant of the passions and that Plato was wrong. This affirms Daniel Kahneman’s and Amos Tversky’s conclusions that “System 1”, our fast, unconscious, intuitive mind dominates “System 2”, the slow, deliberate conscious process favoured by the rationalists. Haidt, however, is not optimistic that his evidence will persuade many suffering from the rationalist delusion that they are wrong. After all, his evidence speaks to riders and not to elephants. Elephant behavior can be changed, but through action rather than reason. We need to understand that, when it comes to practices like management, we (riders and elephants) act our ways into better ways of thinking rather more readily than the other way around. This is where the concepts of ecological rationality and embodied cognition that I develop in The New Ecology of Leadership become very useful in helping one appreciate the limits to logic.

It is become increasingly clear that logic evolved in humans, not to help us (the riders) reach wise decisions, but to help us justify and argue for wise decisions that we (our elephants) have already reached. And all those arguments rarely persuade anyone to change the their minds unless their “elephants” were already leaning that way in the first place…perhaps my parents’ cautions about dinner table conversations had a point after all.