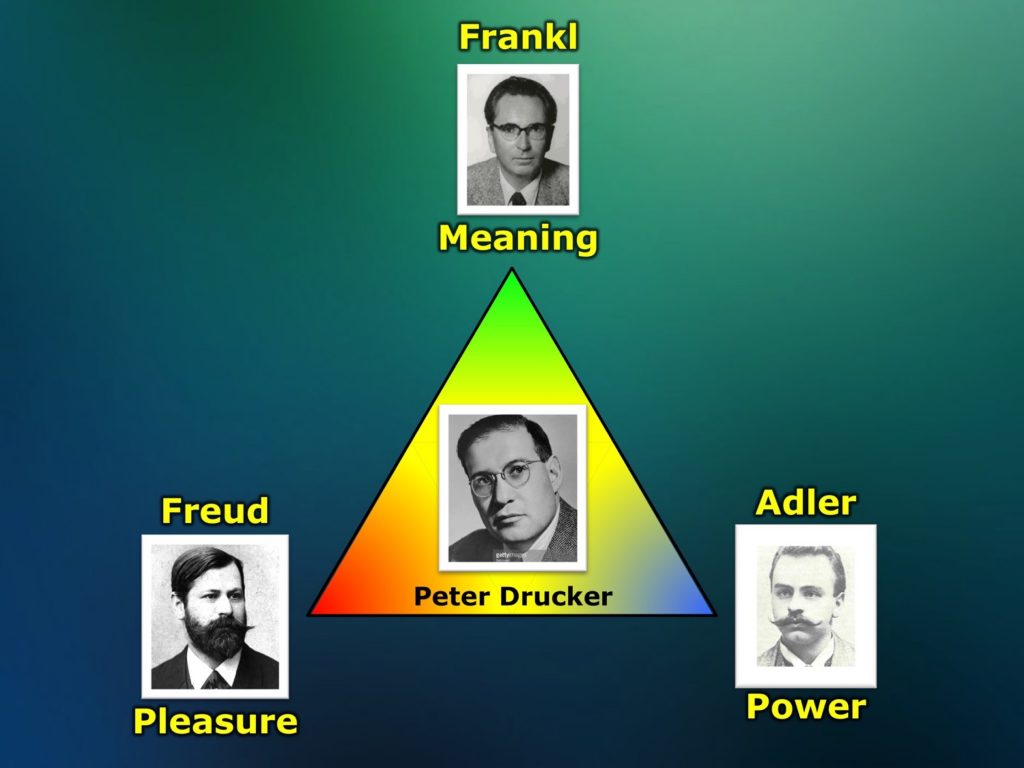 Management as a Noble Practice

The theme of the 2017 Global Drucker Forum to be held in Vienna later this year is “Growth & Inclusive Prosperity – The Secular Management Challenge”. Dictionary definitions of prosperity mention a condition of being successful or thriving, especially economic well-being – a desirable accompaniment of living. What’s the essence of living then? Three Viennese psychotherapists came up with three distinctly different answers:

All of them have a kernel of truth, for it’s difficult to imagine humans flourishing without each of these incommensurable components, although the mix would be different for every person. Perhaps they are stages in life. When one is young it’s mostly about pleasure; in adulthood our focus is on power and control and in old age we become makers of meaning. But we are always concerned with all three.

One suspects that Peter Drucker would have supported Frankl’s emphasis on our quest for meaning. Frankl wrote that meaning could be found in three contexts that were close to Drucker’s own experience:

• Through significant work and achievement
• Through relationships, love and caring
• Though suffering and courage in times of adversity

Once again, all three are surely necessary for a meaningful life. Frankl stressed the importance of the individual sense of responsibility that has to emerge from these experiences, the responsibility to accept the different tasks that life sets for every one of us and to find answers to the problems that we face. Echoing Nietzsche, he writes, “He (who) knows the ‘why’ for his existence, … will be able to bear almost any ‘how’”, which reminds one of Drucker’s thoughts on the primary responsibility of leaders to continually articulate the mission and purpose of their organizations.

Anglo-American management has long been preoccupied with ways and means, rather than purposes and ends. In the mid-20th Century, with a gospel of progress an instrumental, technological approach emerged. As sociologist Philip Selznick suggested, management academics were concerned that they be seen as scientists rather than moralists; “…they say given your ends, whatever they may be, the study of administration will help you achieve them. We offer you tools.” The emphasis has been on human individuals as mono-logical, rational actors making rational choices in the pursuit of selfish ends. The focus on exchange and consumption, with money taken as the universal solvent, has resulted in a view of life and living that is closer to Freud’s (with Adler as a sub-text) than Frankl’s. The answer is always ‘more’. As management scholar James March has remarked, we have been preoccupied with ‘plumbing’ rather than ‘poetry’, with the logic of consequences, what the economists call utility, to the neglect of the many logics of identity. For despite the economists’ emphasis on rationality, the evidence is that most human decision-making is an attempt to answer three questions, both individually and collectively:

We are rather better rationalizers than reasoners, rarely able to make rational choices in prospect, but adept at retrospectively rationalizing the decisions we do make and defending them. Our so-called cognitive biases are not a flaw but a reflection of the kind of situations we faced as we evolved as a species. For we evolved to make fast ‘good-enough’ decisions under pressure of time and conditions of uncertainty. Often there was little agreement on the nature of the problem and little certainty as to its solution. The unit of survival was always the community, not the individual and our make-up reflects the emphasis that evolution placed on agility and cooperation within groups, rather than competition. Cooperation was enhanced when we knew that people would play roles that reflected their identity rather than their self-interest. We trust people who are honest by character and conviction, rather than only by calculation and choice.

Pablo Picasso once opined that computers were useless because they only gave answers. They give answers to ‘complicated’ problems, where the range of possible outcomes is clear and their probabilities can be calculated. Management action can be direct and outcomes and risks measured. Unfortunately many of the problems that organizations face are ‘wicked’ – complex rather than complicated. There are multiple stakeholders with different imperatives and the puzzle changes its form as one grapples with it. Uncertainty reigns, with the range of outcomes unknowable and their probabilities incalculable.

Prosperity and inclusive growth are wicked problems. So what do people like us (managers) do in situations like this? I believe that we have to act and think more like gardeners and less like engineers; prosperity has to be cultivated, it cannot be manufactured. As English economist, John Kay points out in his fine book, Obliquity, in such contexts decision-making cannot proceed by defining objectives, analyzing them into goals and breaking them down into actions. Friedrich Hayek labeled the belief that one could construct what should be inherited or learned as ‘the fatal conceit’ and showed how those who had attempted it had done massive damage to the complex systems they tried to build.

Thus we cannot create either prosperity or inclusive growth directly, we can only work obliquely and create the conditions for them to happen. We can select and plant and tend, never forgetting the vast natural system on which everything depends. In complex human systems this includes the institutional taproots of our societies; the family, the primary school and communities of faith. Here the understanding of how things happen is captured in sense-making narratives, unique to every organization, not predictive chains of logic based on general principles. It’s all about the growth and development of organisms whose trajectories are path-dependent and inimitable. In a well-known 2010 article in the Harvard Business Review, Clay Christensen wrote, “Management is the most noble of professions if practiced well. No other occupation offers as many ways to help others learn and grow, take responsibility and be recognized for achievement, and contribute to the success of a team.” It is this noble practice that should be front and center in Vienna this November.
This article appeared today on the blog of the Global Drucker Forum