← Why Strategy Has Lost Its Mojo Changing Behaviour Without Changing Minds: the case of the Stockholm congestion charge → 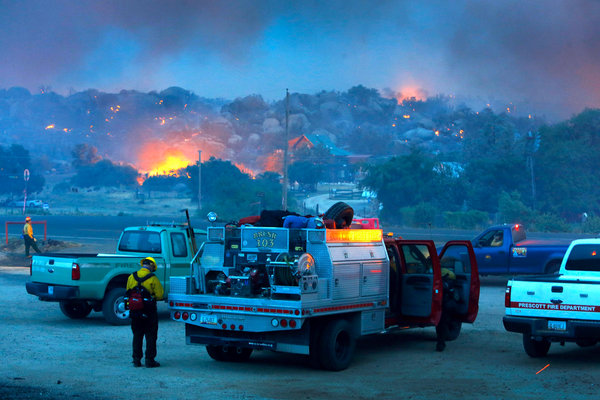 The tragic death over the weekend of nineteen firefighters fighting a fierce wildfire in defence of the town of Yarnell, Arizona is a reminder of the perils of building structures on top of processes. This week’s blog is based on an excerpt from The New Ecology of Leadership that draws an analogy between organizations and settlements on the edge of the fire-dependent forests of Western North America. It argues that established organizations are just like houses built on the edge of the Western wilderness or on a coastal barrier islands. They are apparently stable, successful structures surrounded by multiple processes of change – changes in their components and in their contexts. Some of these processes are visible; many are not. This is because of the vast range of scales on which the changing elements operate. We can learn a great deal about the origins and dynamics of crisis from nature.

For sheer spectacle and drama little beats a wilderness wildfire. It must be network television’s favorite natural catastrophe. Thus, in October 2007, when wildfires burned in the idyllic suburbs of San Diego County, our television screens were full of images of smoke and flame for nearly three weeks. Dry Santa Ana winds swept down the mountains from the north- east at speeds of up to 100 mph, driving a firestorm with horizontal flames more than 200 feet long. Spectacular fire tornados spiraled hundreds of feet into the air, deploying an advance guard of glowing embers that could kindle the tinder-dry brush hundreds of yards ahead of the main front. Burning houses were the hottest objects, capable of igniting their neighbors through radiant heat alone. Television anchors told stories of heroic firefighters and showed pictures of the exhausted men against the back- ground of the infernos.

Reporters told heartrending tales of ordinary people who had been given only minutes to evacuate their homes. Half a million people were under a mandatory evacuation order. Clutching their precious possessions— children, pets, and a few boxes of memorabilia—they joined long lines of traffic to assemble at sports stadiums and other central points, where they were greeted by volunteers with water, blankets, and the other necessities for survival. Young and old, rich and poor jostled together in unfamiliar but strangely exhilarating social arrangements. The shared experience, with its shocking focus on what really matters in our lives, seemed for a brief moment to re-create the human community. Neighbors met their neighbors, some for the first time, and strangers became friends overnight, bonded by the shared trauma. In the eighteen fires that raged during that time, twelve people were killed, more than fifteen hundred homes were destroyed, and half a million acres were “charred.” The financial loss was estimated at well over a billion dollars.

The immediate causes of the fires were numerous: sparking power lines downed by high winds, traffic accidents, and several cases of suspected arson. A ten-year-old boy admitted to starting one fire while playing with matches. The contributing causes were the ongoing drought in the region, the fierce winds that howled down from the mountains, and the vulnerability of many homes to fire. One even more fundamental cause that received less attention was the underlying predisposition of the landscape in this region to burn.

Much of the vegetation in the West is either fire dependent or, at a minimum, fire adapted. The lodgepole pine tree, which ranges all across the region, requires fire to regenerate itself. The chaparral, the shrub community found throughout California and other Mediterranean climates, has elements within it that are fire dependent, and all its plant members have strategies to cope with fire. Indeed, this plant community in its natural state is adapted to a fire regime of burning about every thirty years to clear away deadwood and spark renewed growth, but, as civilization has encroached on the wilderness, the frequency of fires has gone up. The 2007 fires occurred almost exactly four years after the disastrous “Cedar” fire of 2003, which remains to this day the most devastating single conflagration in California.

The fire risk in the region is not expected to lessen; indeed, it is expected to get worse as the native chaparral, which is burning too often for its own health and sustainability, is replaced by invasive grasses that are even more volatile. Worse still, in the aftermath of fire the steep hillsides become more vulnerable to slides of mud and debris, which can destroy the homes below.

Building on the Edge

This increasing frequency of fire and the subsequent mudslides present challenges both for homeowners who enjoy living on the edges of the wilderness and for the insurers who cover them. For they have to decide whether to build structures, which are expected to last at least thirty to fifty years (and then to be changed only at their owners’ behest), on top of processes that are likely to cycle at a much more rapid tempo.

It’s a perpetual battle between people who crave stability and predictability in an ecology that needs to change if it is to be sustained. And nature bats last.

One Response to Lessons from Another Wildfire Tragedy: Nature Bats Last