Drucker’s Intent and Why MBO Fails

Last week I blogged about mission command – auftragstaktik – a philosophy of command-and-collaboration developed by the German General Staff over a period of about eighty years, beginning in the 19th Century. Today its elements can be found in the field manuals of the world’s leading armed forces. While one finds the words in the manuals, however, the habits and behaviours that underpin mission command are more difficult to emulate. Mission command is not just a set of tools and techniques that can be learned and “applied”. If humans and their organizations were “blank slates” – computers that could be programmed – then such a cut-and-paste approach might work, at least in principle. But they aren’t and it doesn’t. One has to adopt the whole philosophy that supports mission command and take the time to develop the individual habits and institutional disciplines that allow it to work effectively.

At the Drucker Forum this year I had the good fortune to meet Peter Starbuck, who did his doctoral thesis on the work of Peter Drucker. After discussions with him about his book, “Drucker’s MbO”, and while writing the last three blogs, it struck me that Peter Drucker’s Management By Objectives suffers from the same complexities as mission command. That is, it is not a set of tools and techniques that can be overlaid on any organization and be expected to work effectively; one has to adopt the philosophy that underpins it too. So one has to ask: “What is the philosophy that underpins MBO? What was Drucker’s intent?”

The Problem with MBO: Auftragstaktik and Befehlstaktik

As I mentioned last week, the German General Staff contrasted Auftragstaktik (leading by task) with Befehlstaktik (leading by orders), which tends to be the default mode for armed forces and large-scale organizations everywhere. The U.S. Army, in its efforts to inculcate mission command, put together a helpful table to contrast the outcomes produced by the two. It is reproduced (with a minor correction) below: 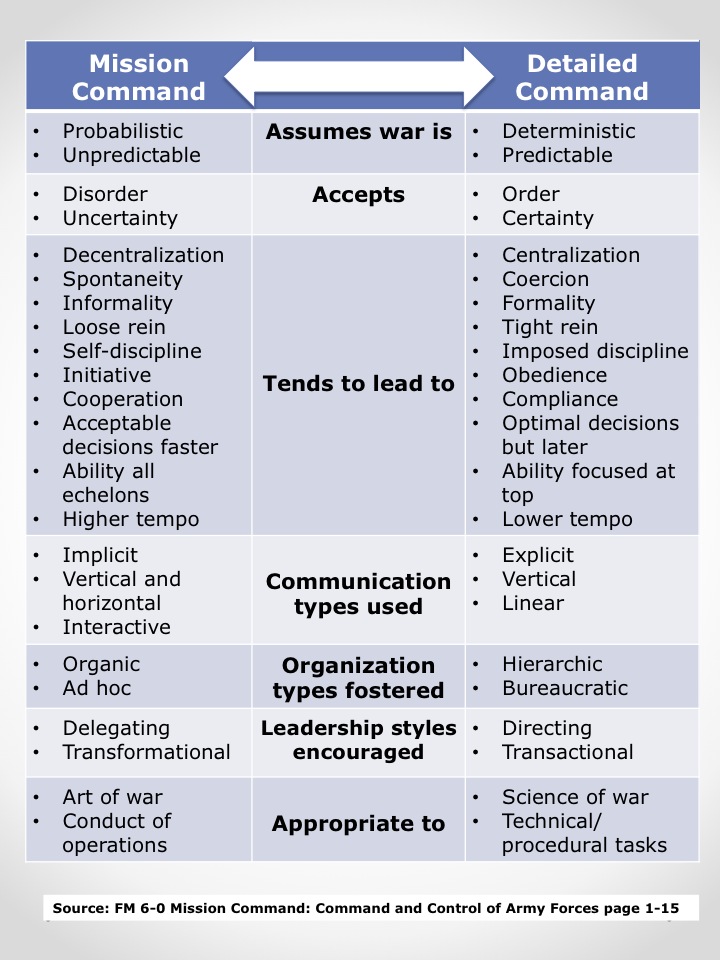 When I look at this table, all I have to do is substitute “MBO in Theory” for “Mission Command” and “MBO in Practice” for “Detailed Command” to have descriptions that match my reading of Drucker intention for MBO versus my experience of MBO in the workplace. Drucker emphasized the need for everyone to understand the mission of the organization and stressed the importance of self-discipline and management by self-control. But in practice this advice was swamped by his injunction to “set clear objectives” and his caution that “if it can’t be measured it can’t be managed”. The result in most of the corporations that I have been involved with has been numerical objectives, set top-down, cascaded throughout the organization and policed by myriad Key Performance Indicators (KPIs).  Instead of producing the outcomes in the left hand column, which was what most top management said was their intention, the result has been the right-hand column, which is a pretty good description of the current situation in large organizations everywhere.

The $64,000 question is, “Why do apparently well-intentioned, competent managers keep on aiming for one outcome and keep on getting its polar opposite?” It cannot be about tools and techniques themselves; it must have something to do with philosophy, especially the instrumental rationality that underpins so much of American management practice and thought.

Wikipedia defines instrumental rationality as “a specific form of rationality focusing on the most efficient or cost-effective means to achieve a specific end, but not in itself reflecting on the value of that end”. It became a feature of American management early in the 20th Century as part of the Efficiency Movement in which Frederick Taylor played such a key role. It is the epitome of the “can-do” problem-solving mentality that takes problems as givens and enthusiastically sets out to solve them. It works well on stable, engineering-type, technical problems, where the problem can be clearly specified and decomposed into its constituent parts. It doesn’t work with complex, “wicked” problems, where the situation is constantly changing and there is no time to wait for optimal solutions. In short, it doesn’t work in battle and it doesn’t work in much of corporate life, once one gets out of the functional departments.

Drucker’s philosophy was eclectic; he always embraced tensions rather than choosing one side or another of apparent dichotomies. At its roots his outlook was European, heavily influenced by his early exposure to the holistic Gestalt movement. His constant emphasis on the need for integration and synthesis, rather than mere analysis, can be traced back to here. But when he came to America and started to write about management, he presented himself as a rationalist. There seem to have been several reasons of this. The dominant view at the time was that management at the top was an art, not tractable to logic and the laws of probability. One of Drucker’s first proclamations was that the age of intuitive management was over and that an active, rational practice of management was not only possible but increasingly demanded by the circumstances.

Another reason, perhaps, for Drucker’s presentation of himself as a rationalist was that in the 1940s many executives regarded him, in his own words, as a “dangerous and subversive radical”.  With rivalry with the Soviet Union growing, it was not a time to be talking about “autonomous plant communities”. There was also a rationalist temper to the times. The Allied victory in World War II showed just how important science and technology were: the launch of Sputnik and the subsequent space race only added to this mood. There was a movement to rationalize management along scientific lines that would culminate in the reform of the leading American business schools in the late 1950s.

Drucker might have represented himself as a rationalist, but he knew that there were limits to rationality. It could be used on its own to deal with the objective world of the natural sciences, but was inadequate to handle the challenges of the human condition. His profoundly Christian values, stemming from his early discovery of the writings of existentialist thinker Soren Kierkegaard, made ethics an integral part of management. It is instructive that after Drucker went to America the criticism of instrumental rationality in Europe – because of its separation of means from ends – would go on to become a central feature of the Continental opposition to Western rationalism. German philosopher Martin Heidegger would reverse Descartes’ aphorism “I think, therefore I am” to echo the existentialist “I am, therefore I think.” Perhaps the label “existential-rationalist” best captures these tensions in Drucker’s philosophy

Thus the philosophy that underpins Management by Objectives is an holist one that always combines ends and means in a relationship of “both…and” not “either/or”. This is an organic, ecological relationship rather than a mechanical, economic one and it is no coincidence that late in his career Peter Drucker would describe himself as a “social ecologist”. This is surely why both management by objectives (MBO) and mission command get into trouble when they are used as tools in organizations where people are treated merely as objects – means to another’s ends – rather than also as subjects, that is, as ends in themselves.

The differences between these two types of organizations are subtle and impossible to tell through the study of their policy manuals. Words are easy to cut-and-paste; one can’t do that with context-dependent behaviours, especially those executed under pressure. The key differences are all in the cultures of the organizations and these one has to experience by being part of them. This is why effective management and military academies depend upon the development of the whole person, inculcating (literally “trampling in”) values and disciplines, not just transmitting tools and techniques. The difficulties of adopting and sustaining such an approach are significant in all large-scale organizations, but understanding the challenge is important. In November at the Drucker Forum the central role of organizations in creating an environment for the better use of human potential was the theme of the plenary session run by Lynda Gratton. It may be the principal challenge facing Anglo-Saxon capitalism.

5 Responses to Drucker’s Intent and Why MBO Fails