← Management in China: The Problem of Trust “Horses for Courses”: Changing the Guard at Citibank → 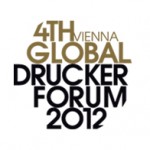 The Drucker Forum, which is taking place in Vienna from November 15 to 16, is now only a month away. It promises to be an excellent conference, with exciting speakers and the promise of great discussions. There will be some hot topics, especially the role of shareholder value and the closely-related subject of executive compensation. Roger Martin, Dean of the Rotman School in Toronto, will no doubt base his argument on his excellent book Fixing the Game and mount the case against shareholder value. Adrian Wooldridge, the Schumpeter columnist for The Economist, will conduct the defense, arguing as he did in Masters of Management for the “crunchiness” of shareholder value and the clarity it lends to assessing performance.

Although executive compensation is not explicitly on the agenda, it can be expected to feature prominently in the discussions. Adrian Wooldridge made the case in favor of current levels, in a recent article entitled “Bargain Bosses: American Bosses are Not Overpaid.”  His case is less persuasive, however, than its headline. He cites the work of Chicago’s Booth School of Business economist, Steven Kaplan. While Kaplan agrees that compensation shot up from 1993 to 2000, he argues that “average estimated pay” (it’s a complex calculation) has declined since then by 46%; median CEO pay is down slightly over the same period. Wooldridge points out that CEOs are now being eclipsed by the top hedge-fund and private-equity managers and concludes that CEO pay is “determined mostly by supply and demand.” Hence the punch line that bosses are “not overpaid”

Are These The Right Questions?

Kaplan’s answers and Wooldridge’s interpretation of them may be right but is he asking the right questions? So what if CEO pay is determined by supply and demand? So is the price of crack cocaine. That does not mean that the outcome is necessarily “right”. Suppose the CEOs are being rewarded for doing things that are not in the best interests of society? A market-based process on a flawed field will produce just as poor outcomes any rigged system. Bent Flyvbjerg in his book, Making Social Science Matter, suggests that a social science based on practical wisdom rather than means-ends rationality has to ask questions like: Where are we going? Who gains and who loses and by which mechanisms of power? Is this development desirable? What (if anything) should we do about it?

If we apply these questions to that of executive compensation in America over the past few decades we get rather different answers:

Q. Where are we going?

A. We are have been through a period of rapid escalation of top management pay whereby median CEO pay went from something like 60 times the median household income in 1993 to 170 times it in 2010. (When Peter Drucker cautioned about executive pay it was only about 40 times household income!). More generally, inequality in America has grown dramatically over the past three decades

Q. Who gains and who loses and by which mechanisms of power?

A. Initially it was CEOs, although more recently the entire C-Suite has benefitted. At the same time, compensation for top hedge-fund managers and bosses of private-equity firms has soared. The mechanisms of power vary. In the case of CEOs, the focus on shareholder value and the use of stock options for compensation has rewarded short-term actions to boost stock prices. In the case of private-equity (or the leveraged buyout movement, to give it its original name) it is a creature of the tax code, depending almost entirely on the tax-deductibility of interest on debt, taken on for purely financial purposes, as well as the favorable tax treatment of carried interest. The vast wealth accumulated allows powerful lobbying efforts to keep these compensation schemes and tax benefits in place and makes them difficult to change. The losers are the taxpayers and the citizens whose lives are disrupted by these incentives that are skewed toward the short-term and the liquidation of domestic enterprises, rather than their creation.

Q. Is this development desirable?

A. There are a number of reasons why these developments are not desirable. The economy becomes distorted by financial considerations and innovations that seem to have little or no social benefits. Their main purpose seems to be the transfer of downside risk from an elite to employees, in the case of firms, and the taxpayers in the case of the financial industry. When employees lose their jobs in the USA they typically get little or no severance pay and may lose their health insurance as well as their pensions if the firm goes bankrupt. When things go wrong people can easily become dependents of the state and the taxpayer.

Q. What, if anything, should we do about it?

A. We have to understand better how complex human systems and ecological processes work. Organizations and indeed capitalism itself are not just systems, they are also ecological processes – they change continually and require continual attention to keep them on track. Walter Bagehot, founder of The Economist put it well: “The whole history of civilization is strewn with examples of creeds and institutions that were invaluable at first and deadly afterwards.” The great tragedy in the America is that, given their druthers, many legislators would “do the right thing.” They would revise the tax code, steadily eliminating the distorting loopholes. The removal of the carried interest for private-equity should be a no-brainer. Unfortunately none of this is easy because of the power of the business and financial lobbies.

As far as CEO compensation is concerned we need to stop teaching that the maximizing of shareholder value is the sole purpose of the corporation. It too is a creed that has outlived its usefulness. As Gretchen Morgenson pointed out in a recent New York Times column, we should also abandon the “Pay-‘Em-or-Lose-‘Em” myth. Good managers cannot run anything and talent is not easily transferred from one business to another. Enterprises need to abandon the cross-firm comparisons (which usually end up with everyone trying to be “above average”) and each firm needs to develop its own compensation guidelines based upon its own unique situation. Boards of directors should ensure that any stock options used for compensation should vest well after the recipient has left the firm and the full impact of their acts of omission and commission has become apparent.

Discussions based on questions like these will make for a lively conference in Vienna.