The Double Vision: “Boxes and Bubbles” Thirty Years On [Part I]

“For double the vision my Eyes do see, And a double vision is always with me:”

In 1984 the first article I ever wrote on management appeared in the May-June issue of the Harvard Business Review. Entitled “Of Boxes, Bubbles and Effective Management”, it told the story of a team of managers struggling to save their firm, which was insolvent and on the edge of bankruptcy. The firm, an industrial distributor, had been taken over in a highly-leveraged buyout on the eve of a sharp recession. During this time economic activity slumped and short-term interest rates exceeded 25%. The firm’s revenues fell sharply and its profits disappeared but the real damage was done by the debt and the interest charges. Almost overnight the shareholder’s equity disappeared; leaving a gaping hole that could not be filled. Yet the firm survived, thanks to the management team thrown together by crisis; and the article told the story of what had happened and how they had done it.

I think that I have always been a reflective management practitioner, especially during the twenty-five years when I was an operating manager involved in a series of mergers and acquisitions, takeovers and turnarounds. I have always thought about how one would map one’s action onto conceptual frameworks and in what way those frameworks could help one go back the “other” way from thought to action. But when, at the end of 1983 with the firm stable again, I looked back at what had happened, I was faced with a problem. I could not map what we had done onto any of the management frameworks I knew about. They were all too conceptual, too formal and too “hard”. Before the leveraged buyout we were a group of highly-structured, task-oriented managers focused on efficiency and performance. The management frameworks I knew about all focused on those tasks. After the buyout we changed completely. It was as if we had passed through a managerial looking-glass: before we had been tightly structured, now we were loose; the organization had been rigid, now it was flexible; doors had been closed and now they were open and so on and so on…I could not find any frameworks that embraced this duality between the “hard” that we had been and the “soft” that we became.

The breakthrough came when I read Benjamin Hoff’s pop psychology book, The Tao of Pooh. I have always been a fan of Winnie the Pooh, ever since a favourite uncle of mine used to read it to us as children, doing all the animals’ voices to perfection. But Hoff’s Taoist interpretation of Pooh and how a Bear of Little Brain got things “done without doing” really caught my attention. It seemed to me to describe perfectly how our team had worked against all the odds and the logic of the experts to get ourselves out of our predicament. As far as the accountants were concerned, the firm was clinically “dead”, with a huge equity deficit and massive debt. Yet we had survived and, working together as a team, put one foot in front of another and got it done.

The next step for me as a writer was to take one of the “hard” management frameworks and treat it and its components as the “yang” or masculine side of a Taoist duo. This allowed me to construct a “soft” counterpart framework that embodied the “yin” or feminine side of the duo. For the hard side I used organization design expert Jay Galbraith’s “star” model, which was popular at the time and is still in use: 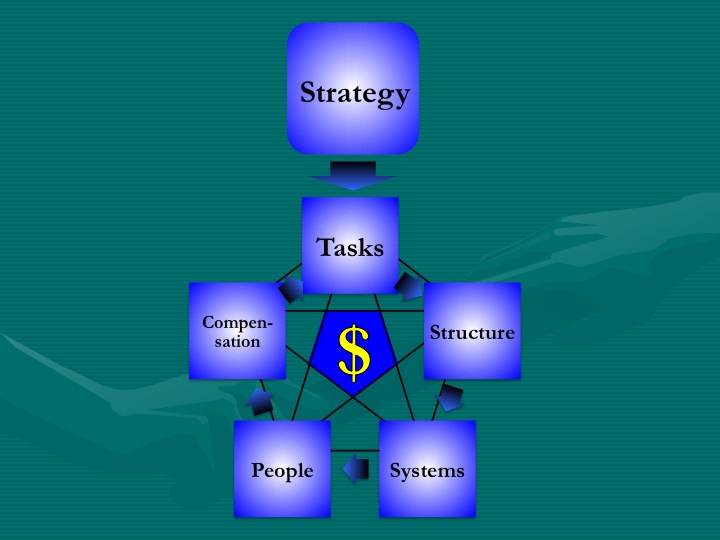 Although Galbraith, even today, describes his model as “holistic”, it is better thought of as “systemic”; that is, it covers all aspects of the organization, but from the high-level perspective of a detached, objective, rational outsider i.e. a top executive, who diagnoses and manipulates what goes on inside the organization through the formulation of strategy. The strategy determines the tasks to be done and everything follows from there. People are treated as if they are objects to be slotted into the machine and that have to be “motivated” with hard targets, key performance indicators, and explicit incentive plans. Now this can all be appropriate and necessary as far as it goes but, as we discovered after the buyout, that’s not very far.

To complement Galbraith’s “hard” model I created a “soft” counterpart that was the “yin” component of the duo. Instead of beginning with strategy it began with people, which meant that the senior executives were not outside the system looking in – they were inside the system looking out. If the “brain” of the firm was strategy, then its heart and guts were the mission – the raison d’etre or purpose for being. Strategy emerged from purpose – it was the connection of effective means with desirable ends. Not only did the addition of a soft model allow one to think of soft more organic counterparts to every hard element of the hard mechanical model, but it also allowed one to think of the relationships between the two of them.

Here’s a picture of them working together: 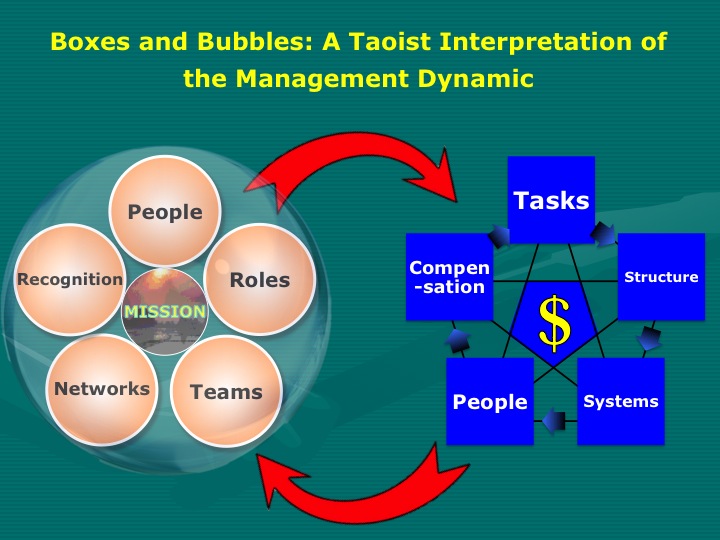 Soft and Hard Models Cocreating Each Other

Of course the challenge is to understand exactly how the two models work together and what one does as a reflective practitioner, living in the tension between the two. Indeed that has been my mission ever since writing the piece!

Our experience of organizational change in the early 1980s proved to be a forerunner of the kinds of changes that many organizations would go through as the relatively smooth growth of the post-World War II era faded away. The HBR article turned out to be the first of many management writings for me (although I never got back into the magazine) and eventually lead to a complete career change. Next week I will continue the story of how the Taoist approach led to me to ecology and systems thinking.