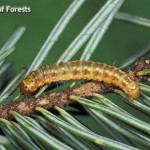 The Spruce Budworm: Disruptor of Forests

This blog is a continuation of last week’s in which I discussed Jill Lepore’s mostly off-target criticisms of HBS professor Clayton Christensen’s theory of disruptive innovation. There I said that my concern with Christensen’s work was his tendency to rely on machine analogies when talking about the economy and the complex system that is capitalism. Mechanical analogies tend to suggest engineering solutions and imply that we understand cause-and-effect rather better than we really do. When applied to complex systems, with their “wicked” problems, engineering solutions can result in unintended consequences. At the level of the firm mechanical analogies lead to people being seen as instruments of the firm, rather than as ends-in-themselves.

In The New Ecology of Leadership I argued that ecological analogies do a much better job of capturing practitioner experience. In this blog I want to outline how an ecological perspective on change and disruption provides a much more generative context than mechanical models. I am going into the ecological model in some detail to make it clear that this is not an idle comparison but an analogy that can be disciplined by reference to ecological science and systems theory. Only when one gets into the detail can one see how it might be used to frame disruption theory. In this week’s blog I will outline the ecological model. In next week’s blog I will use my adaptation of it to understand change and disruptive innovation in human systems.

Panarchy – The Ecological Counterpart of Hierarchy

In their book, Panarchy: Understanding Transformations in Human and Natural Systems, Lance Gunderson and C.S. “Buzz” Holling outline the ecological dynamic that I subsequently adapted and used in The New Ecology of Leadership. Here is a diagram of the basic scheme:

A Model for Understanding Ecological Transformation

The key feature in the diagram is Holling’s adaptive cycle, an infinity-shaped loop that consists of a long, slow period of growth and accumulation on the “front” loop and a fast back loop of destruction and renewal. The cycle shows four ecosystems functions (r, the exploration phase, K, conservation phase, Ω, the end phase and α, the beginning phase) and how they connect with each other. The dimensions of the adaptive cycle (not shown in the diagram) are scale or potential on the vertical axis (from small to large) and degree of connectedness (from weak to strong) on the horizontal scale.

The panarchy framework consists of three adaptive cycles working at different systems levels. Like all systems frameworks, this can be thought of as a three-paned window that can be slid up and down multiple systems levels. In the centre pane is the focal organization – the complex system you are looking at for the moment. Below it are the smaller, faster systems that form its “components”; above it are the larger, slower systems that make up its context. For stability in ecosystems the larger, slower systems must govern and constrain the smaller, faster ones. But every now and then the smaller, faster systems escape this control and revolt against the constraints. The dynamics of panarchy allow one to understand how these periodic disruptions can occur in natural systems.

A classic example comes from the evergreen forests of Eastern Canada that, before the use of large-scale insecticide spraying, were regularly decimated by massive outbreaks of the spruce budworm, a voracious eater of foliage and killer of trees. In this case the three levels of system are:

The system is stable when the trees are young and the foliage is not too dense and the birds can find the budworms easily and (together with other factors) control the insect’s reproduction rates. In this situation the budworm population can never grow large enough to damage the forest severely. But over time, as the forest grows and the foliage becomes dense, the birds cannot find the budworms so easily. At some stage the budworm population explodes exponentially, decimating the forest, while the population of birds cannot expand fast enough to contain the worms. When most of the trees are stripped and the food supply comes to an end, the budworm population crashes. The trees that survive are stronger than those that are killed and are better spaced apart (making the system “weakly connected”, which prevents the budworm from travelling from tree to tree through the foliage). The fires that often follow the budworm attacks recycle the dead wood as nutrients and create the ideal conditions for seeds to germinate. In this way the system is renewed through creative destruction and the stage is set for the long, slow cycle of growth and accumulation to begin again.

From Quality to Quantity

When the lumber industry began in New Brunswick in the late 17th century, the tree reserve seemed infinite. Although up to 80% of the trees could be killed by periodic budworm infestations, no one worried much about them. By the time of the Napoleonic wars, when the Baltic forests were cut off by the French blockade, the province was supplying the majority of the white pine masts for the British Navy. By the mid-1850s most of the easy harvesting was over, with the rising demand for wood being fed by the introduction of steam-driven sawmills. Spruce budworm devastations were documented in the early 1900s. The tree and fossil records showed that they had happened every 30-40 years for hundreds, if not thousands of years

By the 1940s the industry had grown significantly and wood was becoming scarcer. An annual aerial spraying program with DDT was begun, boosted by the post-war availability of cheap planes. The use of DDT was eventually discontinued because of the collateral damage, especially to the fisheries, and it was replaced by a variety of other chemicals. The spruce budworm was suppressed and the forests grew without being devastated by them. The result of the spraying program was an increase in the volume of wood produced by the forests but at the expense of quality. Without the budworm to thin them out, the trees in the forest grew close together and they could not achieve the same sizes as they had before – the lumber business declined while the pulp and paper industry grew…

In the adaptive cycle and the panarchy framework one has some really useful perspectives for understanding change in complex natural systems. Natural analogies, disciplined by complex systems theory, can be a fruitful way of thinking about change in complex human systems. The analogies require significant adjustments, however, as one moves from natural systems to human systems, from trees to people. This will be the topic for next week’s blog.