← Changing Behaviour Without Changing Minds: the case of the Stockholm congestion charge Is Conscious Capitalism A Conceptual Mess? →

Complexity and the Plexus Institute: The Critical Role of Intuition in Action and Thought 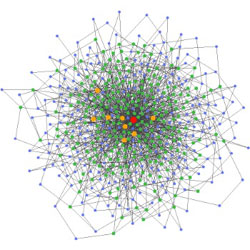 Last Friday I took part in an online discussion of The New Ecology of Leadership arranged by The Plexus Institute. The institute describes itself as “an intertwined community of diverse people–scientists, business executives, nurses, artists, teachers, journalists, researchers, physicians, college students, community leaders, and thinkers–united in our determination to create something better. By learning from and with each other, we are making strides against some of the major problems afflicting society and human organizations.” A “plexus” is defined as: 1. Anatomy and zoology: A structure consisting of a bundle of minute closely interwoven and intercommunicating fibers or tubes; a network of nerve fibers or blood vessels. 2. General: Any intertwined or interwoven mass; an intricate arrangement or collection of things; a web, a network.

I joined Plexus last year and they do a wonderful job of keeping one in touch with many aspects of complexity and complexity thinking. The weekly PlexusCalls feature a wide variety of different perspectives. Many of the institute’s members are from the healthcare system and the definition of a plexus seems to describe them admirably! My partner in the discussion was Dr. Felix Ankel, Director of Emergency Medicine Residency at Regions Hospital, St. Paul, Minnesota and Associate Professor of Emergency Medicine at the University of Minnesota. I prepared a slide presentation of about 30 minutes in length and the entire one-hour long call was recorded (you can download the mp3 here)

Who Rules the Human Mind?

The more I read about the need for a new approach to management and organizations, the more I am struck by how many of the proposed new “paradigms” are based upon obsolete ideas about the human mind. Worse still, their assumptions about cognition are usually unexamined. Many writers and “thought leaders” seem to believe that science or, more accurately, scientific materialism has dispensed with the need for philosophy (and, of course, religion). Often coupled with this view is what Jonathan Haidt in his book, The Righteous Mind, calls the “rationalist illusion”. In management this is the assumption that conscious thought does or ought to precede action and that rationality rules intuition. This leads to the well-known call for new “principles” that should govern management thought and hence action. 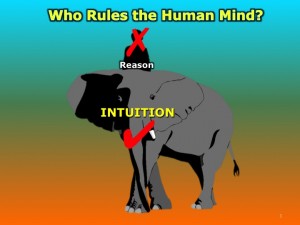 Rider on an Elephant: analogy of the human mind

Haidt used an evocative image of the human mind as a rider (reason) on an elephant (intuition), an image that I recreated to use in the presentation. In theory there are a range of possibilities from the rider (reason) being in charge through a range of interaction possibilities to the elephant (intuition) running the show. But the evidence is mounting that in practice the elephant rules and that the rider is adept at rationalizing the choices that the elephant makes. Elephant behaviour can be changed, but not by talking to (teaching) the “rider” (reason). Elephant behavior is changed by experience in a social context a.k.a. “learning”. Indeed philosophers Hugo Mercier and Dan Sperber have suggested provocatively that reason may have evolved to win arguments, rather than to reach decisions!

The implications of this change in assumptions about human nature are profound. What we call “intuition” is actually the workings of an “adaptive toolbox” that our embodied minds have developed over evolutionary time. It consists of many rules-of-thumb (heuristics) that allow fast, frugal, “good-enough” decisions under pressure of time and conditions of uncertainty. These rules-of-thumb are triggered by contexts of different kinds; humans did not evolve general-purpose optimizing strategies because these do not generalize well to new situations. The argument is often made that rules-of-thumb trade off effort for accuracy – we save time and cost by not gathering additional information, which results in sub-optimal decisions. But there is evidence from the work of Gerd Gigerenzer and his colleagues that in the real world there may be no trade offs: less may indeed be more!