← Romney and Obama: Do Mormons Make Better Managers than Leaders? Management in China: The Problem of Trust →

Communities of Faith and The Spirit of Capitalism

Last week I asked in the context of the US presidential elections, “Do Mormons Make Better Managers Than Leaders?” The question was intended to be provocative but I do not think it either impolite or improper, especially as well-known HBS professor Clayton Christensen, a devout Mormon, has written that if HBS were a religion it could be Mormonism! So the question could easily have been; “Do HBS (and other business schools) produce better managers than leaders?” But I was interested in the role of communities of faith in business in particular and in capitalism in general.

In The New Ecology of Leadership I show how enterprises are conceived in passion, born in communities of trust and practice, grow through the application of reason and mature in power. In the past, communities of trust and practice have usually been associated with communities of faith. In The Protestant Ethic and the Spirit of Capitalism, sociologist, Max Weber linked the rise of capitalism with the appearance of Protestant sects, where good works and the wealth that accompanied them were seen as a sign of God’s blessing. High achievement motivation and a zeal for education were also advanced as explanatory principles. In Crisis & Renewal I suggested that these “explanations” were uniformly unsatisfactory. They were overly rational, too individualistic and, worst of all, impossible to replicate in modern contexts. In short, they were descriptions, rather than explanations. In addition, of course, forms of capitalism have appeared in many communities that are not Christian. 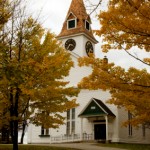 In Crisis & Renewal I turned to the communities of Nonconformists, especially the Quakers, to get some clues to understanding the dynamics of innovation. What struck me about the Quakers was their openness to experience and their willingness to learn from it. Robert Barclay, one of the founders of the movement, wrote that there were three forms of Christianity: Catholicism, Protestantism and Quakerism. In his view the first depended upon the authority of the church and the second upon the authority of the text (the Old Testament), whereas the Quakers depended on the authority of the spirit. The Quakers believed that what counted was the individual’s experience of the spirit, unmediated by priest or text, and that experience could be realized only in a group context. They rejected the reliability of intellectual “head knowledge” – every Quaker had to feel his or her way to the spirit. Their focus on the present was such that they went to great lengths to rid themselves of unwanted legacies from the past, changing the pagan names of months and days to numbers. Thus Sunday became “First Day” and January was renamed “First Month”. The Quakers came to embody what Adam Smith would call, nearly a century later, “moral sentiment”, an innate sense of right and wrong and a natural empathy for others.

The Quakers carried their open, assertively egalitarian practices through to trade, an activity they were often forced into by their early persecution by the authorities, which drove them off their farms. They made no distinction between religion and business, refusing to charge different customers different prices for the same goods and telling the truth even when not under oath to do so. They set up their own schools and apprenticeship systems: they believed that the best learning came through practice and from example under the tutelage of a master. They were active social entrepreneurs, reforming schools, hospitals, prisons and asylums. As the saying goes; by doing good they did very well. They created the iron and steel industries as well as the chocolate industry – in those days chocolate was seen as a socially desirable alternative to scourge of hard liquor. They laid the foundations for the great banks, and were involved in the start-ups of dozens of other industries, ranging for chemicals to food and footwear.  They are a nice historical example of Rosabeth Moss Kanter’s finding that the firms that do the best job of increasing shareholder value are not the ones who set out with the explicit aim of doing so!

The Quakers were on my mind last week when I asked : “Do Mormons make better managers than leaders?”. The two faiths share much in common: the focus on the individual-in-community, the emphasis on deeds, honesty and plain speaking. Tithing is obligatory if one is to be in good standing with either community. The Mormon missions are a formalized variation on the Quaker travels and visitations. Although, in the case of the Quakers, women as well as men would undertake these journeys. Like the Quakers, the Mormons have no professional clergy and members of the church perform that role unpaid.

Despite the many similarities between the two religions there is at least one significant difference: the Mormons are much more hierarchical and conservative of the status quo. They have an authoritative text as well as a male-only governing body consisting of the President of the Church and his advisors, who have considerable power. The structure of the church resembles that of a corporation and their organizational model it is designed so that it can be scaled up to a much larger size.

The Quakers of three centuries ago, on the other hand, were much more egalitarian and impatient to change society and right the wrongs that they saw inflicted on their fellow citizens every day. They did not set out to become rich – they just wanted to change the world. And change it they did, although their organizational model resembled that of a start-up and, like many entrepreneurial ventures, it did not scale well. Eventually their enormous success destroyed the roots on which it was founded and today the Quakers are but a shadow of their former selves and many members of the church seem to shun business.

The contrast between the Mormons and the Quakers offers an insight into the contrast between managers and leaders. Both can be forces for good but the essential difference between the two is that managers are more conservative and leaders are more radical. Managers and administrators want to improve the status quo but incrementally; leaders and entrepreneurs want to change it by experimenting with very different approaches.

Of course, every organization needs them both.