The surprise announcement of the retirement of Intel’s CEO, Paul Otellini, in May next year, three years ahead of the mandatory date, sets the stage for perhaps the most challenging and important CEO selection in the firm’s history.  For students of management Intel has always been an interesting company and I discussed it specifically in The New Ecology of Leadership.

As the diagram from the book shows, Intel’s revenue history tracks the classic S-shaped curve spanning over forty years. Intel began life as a start-up founded by Robert Noyce and Gordon E. Moore. They were members of the famous “traitorous eight”, who left Shockley Semiconductor Laboratory in 1957 after conflict with the domineering founder of that company. They first participated in the founding of Fairchild before going on to start Intel to make random access memories (DRAM): 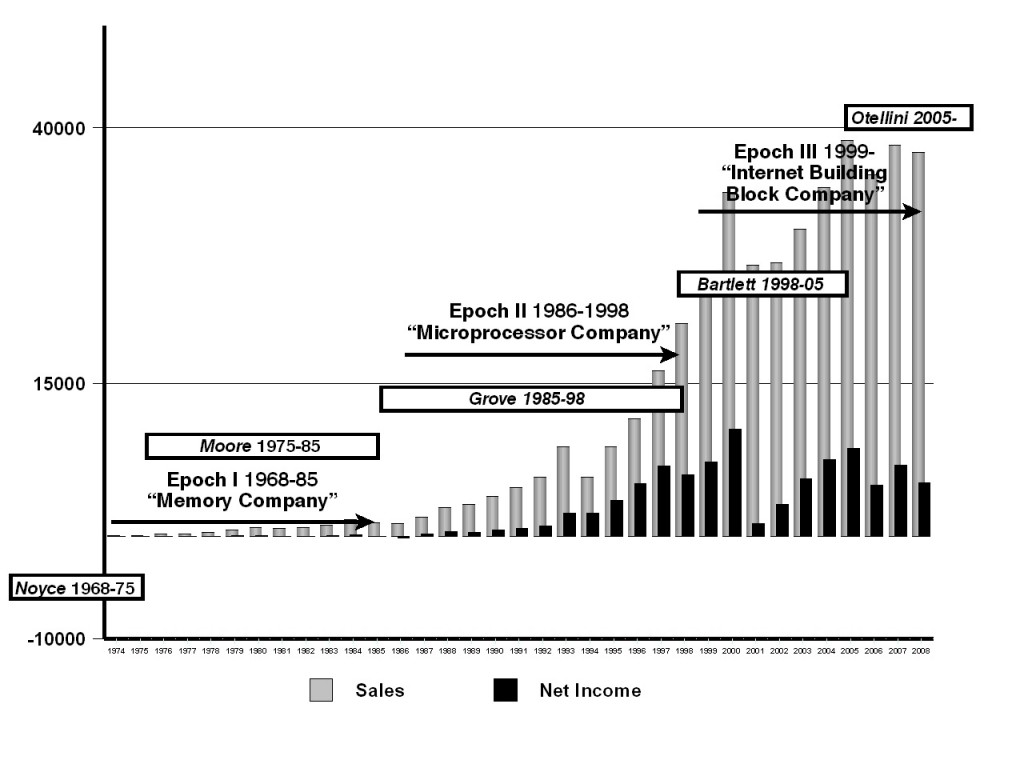 The firm has been through three epochs: Epoch I as a memory (DRAM) company (1968-1985) with Noyce and Moore; Epoch II as a microprocessor company (1985-1998) with Andy Grove; and Epoch III as an internet building block company (1999-?) with Bartlett and Otellini. The transition between Epoch I and Epoch II has been made famous by Andy Grove’s description of it as a deliberate choice that emerged from the way in which they allocated manufacturing resources to different products. As the margins on DRAM chips dropped steadily, Intel’s production algorithm allocated increasing amounts of manufacturing space to microprocessors. After months of bickering and drift, Grove said to Moore one day in mid-1985, “If we got kicked out and the board brought in a new CEO, what to you think he would do?” Moore immediately replied, “He would get us out of memories.” Grove recalled; “I stared at him, numb, then said, ‘Why shouldn’t you and I walk out of the door, come back, and do it ourselves?” Which is exactly what they did.

This was the moment of truth for Intel and it set the stage for its takeoff and rise to dominate the microprocessor industry during the PC era. The CEO succession (also from the book) shows the sequence of bosses and their preferred “navigation tools” as they work between ends and means. Bob Noyce and Gordon Moore created the original community of trust, with Noyce, who could not stand confrontation, handing over to Moore early in the process. After Gordon Moore, the famously confrontational Andy Grove drove the business to giant scale and Craig Barrett and Paul Otellini continued on the trajectory he had ridden so successfully. The transition from Epoch II to Epoch III was much more gentle than the earlier abrupt switch from I to II; it seems almost organic, rather like a great river flowing into delta as it nears the sea. According to Forbes, Otellini, in particular, “nicely milked Intel’s PC-chip business“. He raised the profile of marketing personal over that of engineers and insisted that Intel focus on cost efficiency over performance – normal indicators that a technology is reaching maturity. At the same time (and perhaps not coincidentally), Intel was unable to establish a foothold in the fast-growing mobile sector, where the ARM-based chips from the UK dominate. With Windows 8/RT, Microsoft has indicated that even its PC software can run on ARM chips. 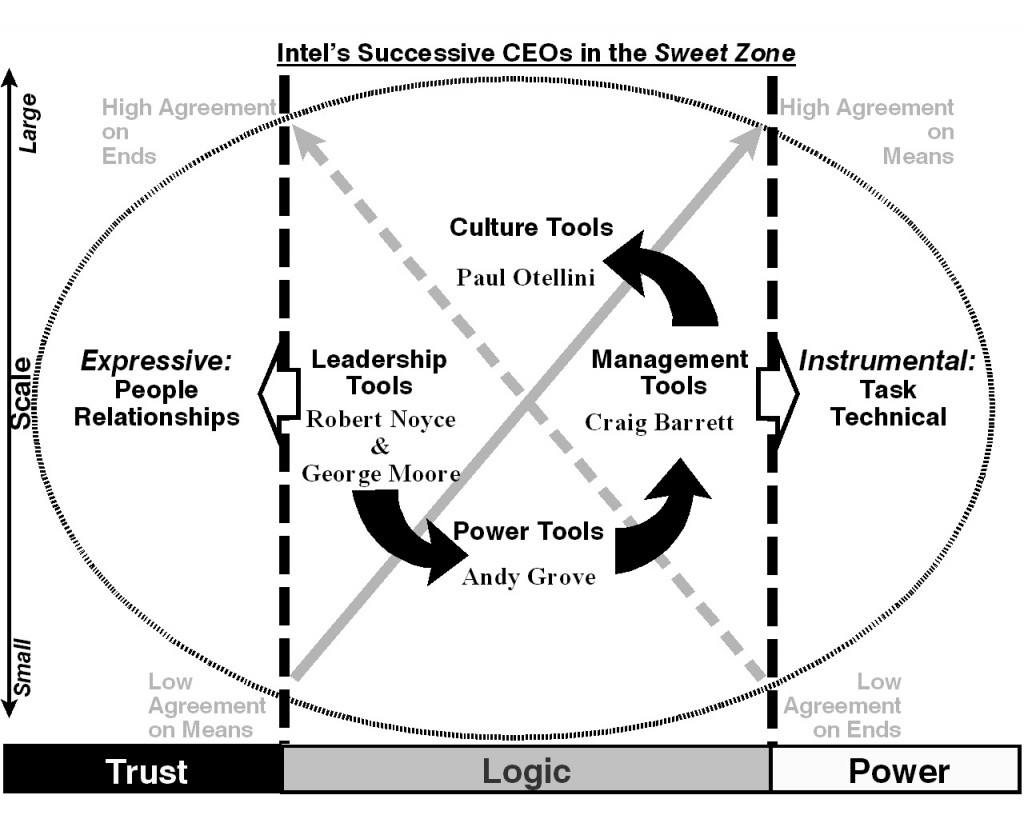 So the $64,000 question is “What is Epoch IV for Intel and what kind of leadership does it require?”

Otellini was the first CEO with a non-technical background and the board will have to decide whether it needs to search for new innovations to renew its technology or whether the existing business focus can be sustained for another period (as some analysts are suggesting). One ingredient in their decision will be the technological trajectory of mobile devices. Typically early devices in any new technology require an integrated design (hardware and software together) to deliver maximum functionality. This is the case with smartphones at the moment. Can Intel perhaps skip this generation of ARM-based mobile chips and jump to the next generation of high performance and low power consumption?

On the other hand, as performance improves, the cost benefits of modular design over integrated design become more and more important. It seems likely that the smartphone technology will follow this route (this is what happened to PCs). The question is when and how quickly? Are there new power-hungry functions still to be added to mobile devices or has the dominant design emerged? When this does happen the value chain will switch from vertically integrated to horizontally disintegrated. Perhaps Intel will then be able to use its huge manufacturing capability to drive prices down and commoditize the smartphone business.

Back in 1985 there was a very clear choice – stay with the old DRAM horse or jump onto the new microprocessor youngster. In 2013 even the questions aren’t clear, let alone the options. Does the Intel board just stay in the Epoch III “delta” or does it also try to reinvent the company with a new (mobile?) technology? To do the latter would seem to more likely to require an outsider as CEO. Today, of course, there is also the question of scale. Back in 1985 Intel’s revenues were under $1.4 Billion; the company had plenty of room to grow. Today revenues are over $55 Billion; new technologies that can make a meaningful difference at that level are few and far between. The ecological perspective reminds us that nature does not rely on large trees to reinvent themselves; it sweeps them away with wind and fire, disease and pestilence and allows new young growth to take their place, using their components as nutrients.

One thing is clear; whoever takes on the challenge as CEO of Intel will have their work cut out!